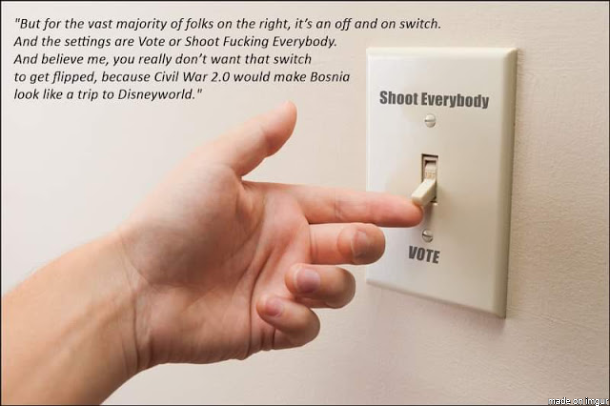 The Left uses talk to fight.
The Right does neither, as a rule.

But if push comes to shove, we'll annihilate.
Talking and fighting aren't steps on the continuum, they're sideshows.

Predators eat prey, certainly, but Nature documents no intramural wars to the death for existential survival within any species, AFAIK.
Except amongst humans.

The Left keeps fiddling with the safety cover over that switch, and seems bent on getting the other half of society to go ahead and flip it.

Then it looks like Dresden and Hiroshima, and puts even diseases to shame for sheer slaughter, until the point is taken to heart.
The human race's population is careening towards a precipitous dip in absolute numbers, with a complimentary spike in the group average IQ.

It's never good to be at the literal cutting edge of that phenomenon, because the phrase itself is rather more descriptive than metaphorical at that point.

That yakking going on now?
That's the Left, contributing the "O"s in OODA, and helpfully self-identifying.

Black and white stripes are helpful to make all zebras look alike, but it's even more helpful to identify them for the menu construction of the local lion pride. Labels: Class is in session, I meme to misbehave, violence solves a lot of things

Ah! greentips the correct ammunition. Engine blocks will stop it but it will stop engines. Will power through autos, most walls both residential and curtain. None but the latest plates will stop it and it can pass through two or three at once. Accuracy issues at long range but anything you can see without magnification is good. Truly a wonderful city round. For the good guys review the words on the difference between cover and concealment in light of green tips.

As Nolte on Brietbart says create your own Chaz Zone it can be large or small and exclude any you do not want (for me - left wing wack jobs) so I have become a supporter and I have started with my house.

"Speach is violence" Hell, they are now at "Silence Is violence" and "whiteness is violence". I was just called a violent terrorist by those engaged in terrorism while I sat at home and watched them burn the cities over the death of a career criminal. When this is over, whatever remains or is rebuilt in the aftermath must not include the continued existence of the public education system or the universities in any shape or form. The "farmers" who planted and cultivated this evil crop for decades must not be allowed to plant again.

Some people always confuse patience and tolerance for weakness and fear. It gets to a certain point and the switch is flipped.

KBO brother, and pass the ammunition.

A comment I recall is "when blacks riot, cities burn; when whites riot, continents burn". Time will tell as to the validity of this statement....

And Speech is protected under the First Amendment.

I really don't think they are going to like it when that switch is flipped.

.30-06 Turning cover into concealment for more than a century.
I'm gonna copyright that for T shirts and mugs.

Ants, ants fight wars, or at least have battles as well

Nope.
Ants of different species will fight each other.

Ants of the same species, not so much.

When you mix up fire ant colonies, every ant that don't run, dies...