Reality Begins To Dawn On Somnolent Media, At Last 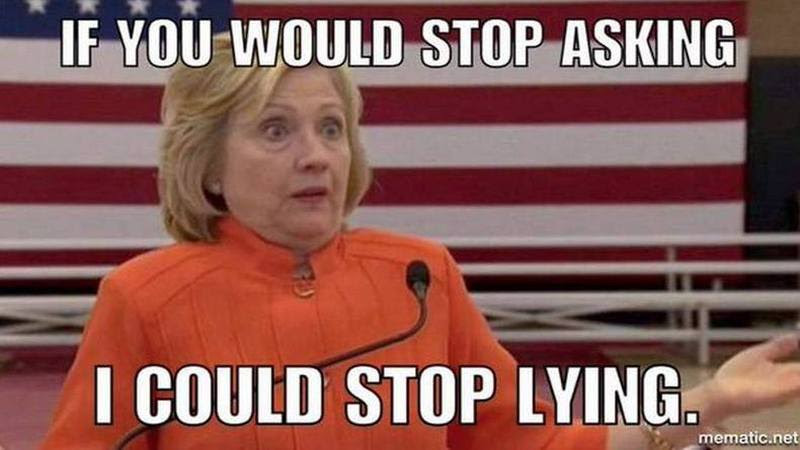 Why did Hillary lie about her health? link

From Damon Linker in The Week, this morning:

Hillary Clinton's presidential campaign just made a massive error. We'll know within the next few weeks if the error will prove to be catastrophic.

On Sunday, Clinton abruptly left a Manhattan ceremony marking the 15th anniversary of the 9/11 terrorist attacks. A video shows her shakily stumbling while trying to get into a van to leave. The candidate's physician later offered this explanation: Clinton has had an allergy-related cough for some time, and during an examination on Friday, the Democratic nominee was diagnosed with pneumonia, put on antibiotics, and told to take time out to rest. She became overheated and dehydrated during Sunday morning's event, which led her to collapse. She's now home in Chappaqua and on the road to recovery.

Compare this timeline to details from Hillary Clinton's public schedule and behavior over these same two days.


After Clinton was diagnosed with pneumonia and put on antibiotics, she did not, as her physician recommended, take time out to rest. Instead, she attended a fundraiser featuring Barbra Streisand. Then on Sunday morning, she attended the 9/11 commemoration, became "overheated," and woozily wobbled rather dramatically. Ninety minutes later she exited her daughter Chelsea's apartment building to tell the press she was "feeling great." The Secret Service permitted a young girl to come over to give the candidate a hug.

It was only a few hours later when her campaign finally announced that she has pneumonia and is recovering.

The most charitable reading of this timeline is that her campaign — presumably with the blessing and perhaps insistence of the candidate — fully intended to keep her illness a secret from the public. Let's be clear about what this means: Her campaign intended to lie.


Even though doing so would require her to keep up a public schedule that might well make her condition worse and require ever-more elaborate forms of concealment. Because, of course, to curtail her schedule would raise questions that might reveal the truth.
So even after she collapsed, the campaign decided the ruse would continue. It arranged for the candidate to make her curbside declaration of wellness, even bringing on the girl to give her a "spontaneous" hug. (Clinton's protection detail would never have permitted a genuinely spontaneous embrace on the street, even by a child.)

So yes, the campaign has now suborned a child to help shill the lie to the American people.
The last time we saw something this blatant in prime time, it was Saddam Hussein hugging hostage children in 1990. 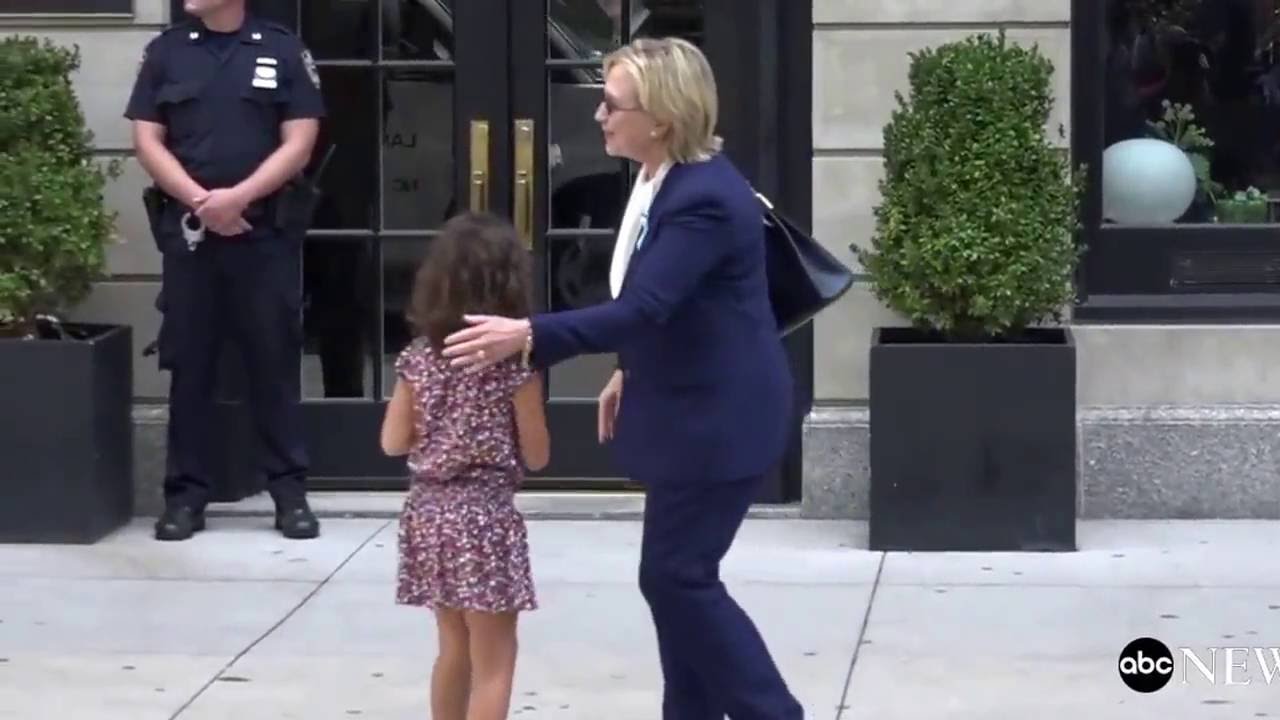 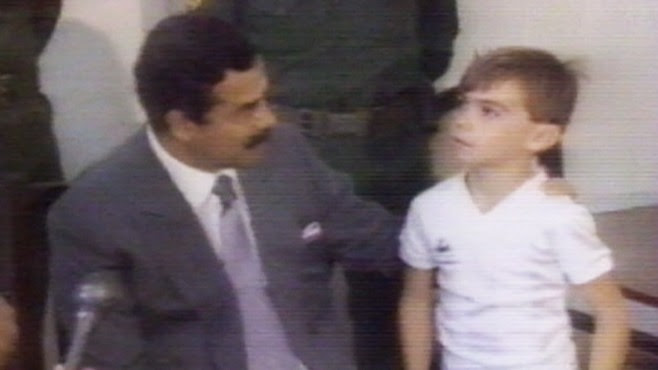 It's easy to understand why the Clinton campaign would want to keep this kind of news a secret. The candidate doesn't trust the media. The right has been hitting her over supposed health issues for months (and even years), and the assault has picked up in intensity over the past week or so — since Clinton found herself in the midst of an extended coughing fit at a campaign event in Cleveland. Then there's the gender dynamic. Donald Trump presents himself as a hyper-masculine tough guy, while Clinton is the first female presidential nominee. The Clinton camp is probably twice as terrified of their candidate looking frail as a less path-breaking campaign would be.

So the campaign chose to lie. The potential reward was considerable: namely, an absence of politically damaging news stories about Clinton's medical condition. But the risk was enormous — and it's blown up in their faces.

Hey, Damon, that's a feature, not a bug.


Because now the story isn't just that Clinton is ill. It's that, once again, she's untrustworthy — and this time about her own health.That's why the announcement that she has pneumonia will only fuel more speculation about Clinton's physical condition, with potentially no end in sight. The world saw her collapse, and 90 minutes later, the candidate looked America in the eye and proclaimed that she was feeling great. Except now we know that she wasn't.
Not long after this charade, someone on the campaign staff made the call to come clean. But it may well have been too late.
The best the campaign can hope for now is that Clinton recovers quickly and soon looks healthy in her public appearances. Then maybe the topic will recede into the background of the campaign. The candidate got sick, but then she got better. End of story.
But if she doesn't recover quickly? If she appears weak and frail for more than a few days? Then, yes, she'll face perfectly reasonable questions about whether she's physically up to serving as president. But worse, she'll confront lingering doubts about what, precisely, is ailing her. "It's pneumonia," the campaign will proclaim over and over again. To which a skeptical America will justifiably reply, "Yes, we can tell that you'd like us to think so. But we have no reason to trust that's true."

Too slow, Damon. We're there now.
And there is absolutely no reason not to assume, ab initio, that the "pneumonia" Cover Story 3.0 is any more honest and factual than were stories of "allergies" or "heat exhaustion".
Oh what a tangled web we weave, and all that.
Shrillary (and her entire staff) are lying criminals. Stop the presses.
("Conference call with the Benghazi consulate and the FBI on line 1, Mrs. Secretary...")


Political trust is a fragile thing. Once it's gone, it's exceedingly difficult to get back — and without it, there's no basis on which to dismiss conspiracy theories that even normally level-headed observers will begin, for perfectly understandable reasons, to entertain.
Like so many of the scandals and pseudo-scandals that have dogged Hillary Clinton and her husband through the years, this one needs to be recognized as entirely self-inflicted. The campaign now has to live with the consequences of having chosen to lie to get out of a problem.

Let's be honest: that particular ship sailed some decades earlier. This is news only to news people. Which begs the question of how y'all got those jobs, if you can't ( or rather, won't) tell the difference between sh*t and Shineola.

I expect the truth of that causes many Democrats a burning sensation in intimate places.
But a course of antibiotics should clear that up.

Proving, once again, that sunlight is the best disinfectant.

Honest Abe delivered those famous remarks at Clinton?
The Almighty truly has an unfathomably large sense of humor.

Bonus Ponder: What's the over/under, and likeliest option, on how long before FBI Director Comey realizes his previous error(s), and either
a) decides to belatedly recommend indictment of Clinton, after "new evidence" surfaces
b) announces his sudden retirement due to pressing family concerns, or
c) commits suicide in Fort Marcy Park, with a handgun made of disparate parts, after shooting himself in the back of the head three times
?

Lastly, a saner and more circumspect analysis of the event, from Karl Deninger's Market Ticker :
Hillary is done.
﻿
﻿
Posted by Aesop at 11:27 AM

That quote from Lincoln appears to be totally bogus, according to the Quote Investigator website. There is no record showing he said that.

But he did debate Douglass in Clinton, IL.