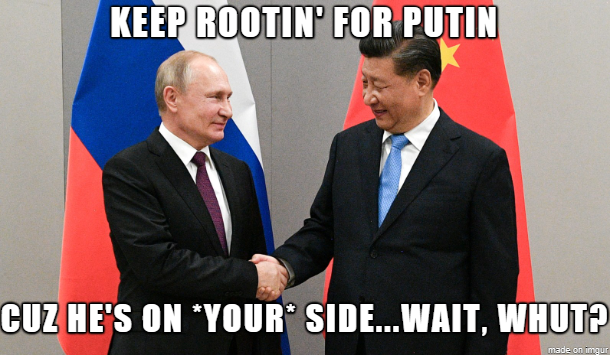 I just wanted to give equal time, by summarizing every argument made here on Putin's behalf in the last 4+ months, in one meme.

The Usual Anonymous Suspects can froth in comments to the shredder. I'm off to buy some guns - plural - to celebrate Independence Day.

Xi is unashamedly standing behind Putin. Because they've both proven to be such lifelong friends of freedom and democracy, obviously, amirite?

That still doesn't make Emperor Stumblefuck Poopypants the Ist a good guy, nor ever did. Just a blind hog finding an acorn, after that wagging the dog experiment got out of the lab, like they will.

But it still makes him accidentally smarter - for a few brief seconds - than an awful lot of people (or a lot of awful people, take your pick).

And how embarrassing is that for those now taking the Second Place IQ Ribbon?!?

Pro Tip: Don't be That Guy.

Labels: I meme to misbehave, Never Go Full Retard, reality slapping you in the back of the head

Aesop - I think you're missing the point of them with this:

>>Xi is unashamedly standing behind Putin. Because they've both proven to be such lifelong friends of freedom and democracy, obviously, amirite?<<

The people supporting Putin DON'T BELIEVE IN FREEDOM AND DEMOCRACY. These people are yearning for a return to what they call "Throne and Alter" civilization. They want to live in a theocratic monarchy, they want anti-blasphemy laws, they want crusades.

Vlad is their hero because he wants all of those things too.

The problem with that analysis, brian, is that both Xi and Putin think they are god, in that model.
Which leads me to suspect most their minions and acolytes, of all stripes, suffer the same planetary rotation delusion: they think the solar system revolves around them.

Hogwash. Support of Russia's reclaiming Russian lands is hardly support for Vladimir Putin. Only a moron would assert that.

The plain fact of the matter is the Russian Federation is winning and will not retreat from Ukraine.

The Muscovites and China are "friends" facing a common opponent, but Vlad has to be looking over his shoulder. China has ancient claims on Siberia, even before the gas and oil were discovered. If Russia gets into trouble with NATO/EU/US, Russia might end up as a Third World player speaking Chinese and eating rice for dinner. China is a "dangerous" "friend" that has lots to gain from a Russian failure. China's only friend is China. Russia has to keep a big piece of its military watching the Chinese border.

Russia seems to feel a lot of other country's lands are "Russian".
Kind of like Mexicans taking about "Aztlan".

This is the difficulty in engaging in "regimeology" in the modern era. There are no countries with sane leadership.

Just because "'tain't so" doesn't mean that they don't fervently believe it and act as if it were true.

So because THEY act like it's so, we have to accept that before we try to analyze their actions.

@Pat H - The Donbas stopped being "Russian Lands" the day they were gifted to Ukraine. And Russia is not "winning" for any meaningful definition of that word. Russia's best outcome now is that they still have the majority of political influence over what's left of Donetsk and Luhansk after destroying almost all of it. And Ukraine ends up in NATO anyway.

Nobody is "winning" the war between Ukraine and Russia.