EU steps away from stumbling facefirst into WW III 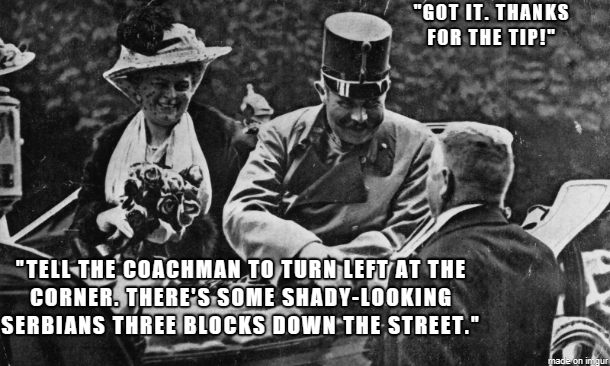 Apparently someone had a quiet word with Lithuainia, and explained to them that, Thanks, No, Europe didn't want to be dragged into global thermonuclear war with Russia by the Duchy of Grand Fenwick.

Which ratchets tensions, and general stupidity, back down several notches from 11.

To their credit, saner heads on both sides resisted the urge to get stupider than the original move, and now everyone gets to save face and avoid widening the conflict.

As expected, the bumbling buffoons surrounding Emperor Stumblefuck Poopypants the Ist had absolutely nothing to do with this, at any level, which explains much of the sensibility of the solution.

Labels: cleat marks in your dick are hard to heal, sanity

Don't know who created the meme, but it would be "tell the chauffeur".

Well... you did mention "saner heads" - ain't any of those anywhere near gropey joe
Boat Guy

Aesop what is your opinion of this:

Or as I've mentioned once or twice Judgement of Judah level of Leadership. Isaiah Chapter 3 worth reading the whole thing as there is hope for those that obey God.

Hahahahaha! I just re-watched The Mouse on the Moon.

OMG - a "Mouse that roared" reference.

I wonder why Germany is so obsequious to Russia?
Maybe they are afraid that Russia is going to cut off their Nordstream Gas supplies?

I think the pipeline capacity is already crippled because a Siemens compressor used by Gazprom was sent out for refurbishment,and was sent to Canada. Canada is not sending it back?

But remember that the Western Ukraine used to be part of the Lithuanian-Polish Empire. The Lithuanians were all those cheerful Vikings and Norsemen. They are even more emotional than the Muscovites.

'Sides, the Russians know that the Chinese haven't given up on their claims to Siberia. If Vlad goes nuclear, the Russians are likely to be a side dish for the Chinese rice bowl. Russia may resent being a small player but it beats being a Chinese theme park.