What Part Of "Existential" Don't People Get? 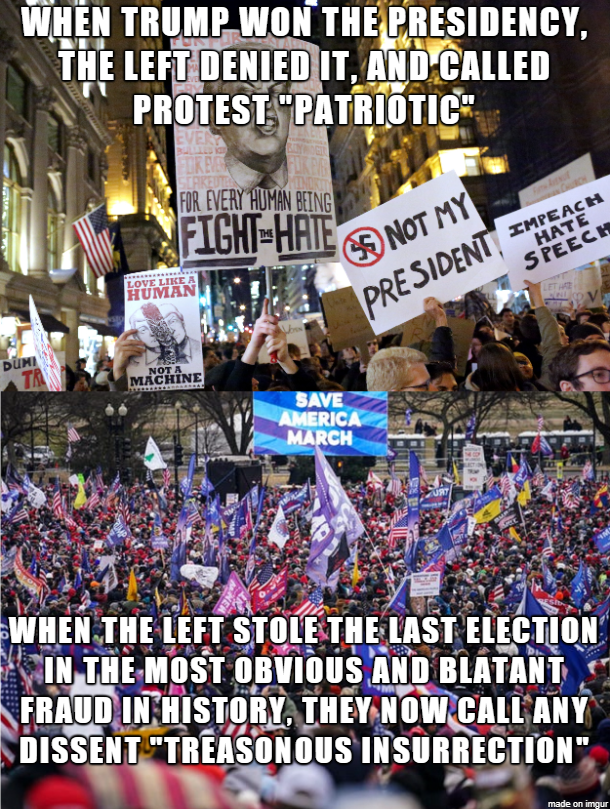 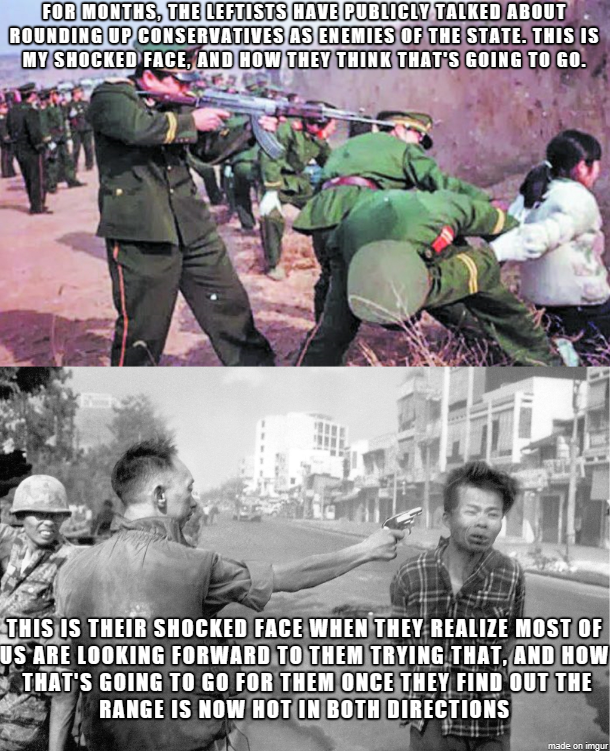 There are not "Democrats" and "Republicans".

There are not "Conservatives" and "Never Trumpers".

Can we get serious?

There are Totalitarian Communists. And then, everybody else.

That group of "everybody else"? Those are Americans.

There is nothing American about Totalitarian Communism.

Never has been. Never will be.

You aren't going to carve out enclaves of "Free America". Because it means you'd have to cede refuges for totalitarian communism somewhere else, and nearby. Like that would ever work, once in human history. How did that go in Korea? Vietnam? Laos? Cambodia? Cuba? Venezuela? Hungary? Czechoslovakia? Poland? And countless other places? They're never satisfied with less than everything, and once they've got that, they smash it to pieces while gorging at the trough themselves, and devil take everyone else. It always ends in a pyramid of human skulls, every damned time it's tried. Fuck that idea, sideways, with a dull rusty chainsaw.

You aren't going to pick the peas, carrots, and scrambled egg out of the fried rice, and divvy up neat little enclaves.

And no one could ever do it, in a million years.

And even if you magically could, where in hell do you think you'd put them?? No one else wants them, here nor anywhere else. You might could palm them off on Cuba, but only if they can swim there.

The only thing that will work EVER, is going to be bog-simple:

One side is going to be alive within US territory afterwards. One side is not.

One side is going to exist.

The other side is going to cease to exist.

If anybody is still hazy on the concept, I invite you to discuss what this looks like with the Carthaginians. Shout loud: Tunisia is a long ways off, and it's hard to hear with six feet of dirt over your bones.

So make your decision whether you're going to be the Romans, or the Carthaginians, in the next such struggle. It's coming at you like a freight train, and there's no third option if you plan to live in the U.S.

You may have an easier time of it in some places than in others (which just tells you where the first bases are going to be), but in the end, you're going to have to either win, or lose, everywhere, because commies, like rust, never quit, and they never sleep. 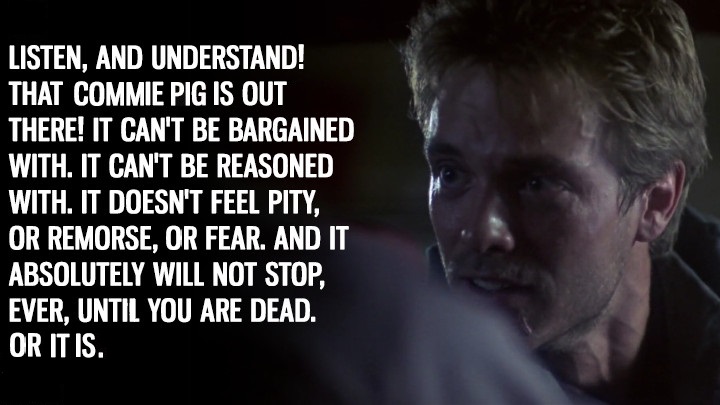 So wrap your head around what's going to have to happen, sooner or later, instead of being all shocked and butthurt when Reality smacks you across the face like 8 pounds of frozen mackerel. And get busy getting ready for that day, instead of daydreaming about how it'll be when your little patch is free and happy forever, like it's been at no point in human history.

You're gonna need a bigger boat.

A loud whine and a sternly-worded letter to the editor isn't going to cut it.

You're not voting your way out of this. Elections are over. READ THAT MEMO.

You're not protesting your way out of this.

But you might, maybe, shoot your way out of where things have gotten to.

That's the only thing that's worked in recorded history.

The price of freedom is eternal vigilance, and liberty demands a blood sacrifice.

And that is the only choice you're ever going to have in the matter, until the day you die. 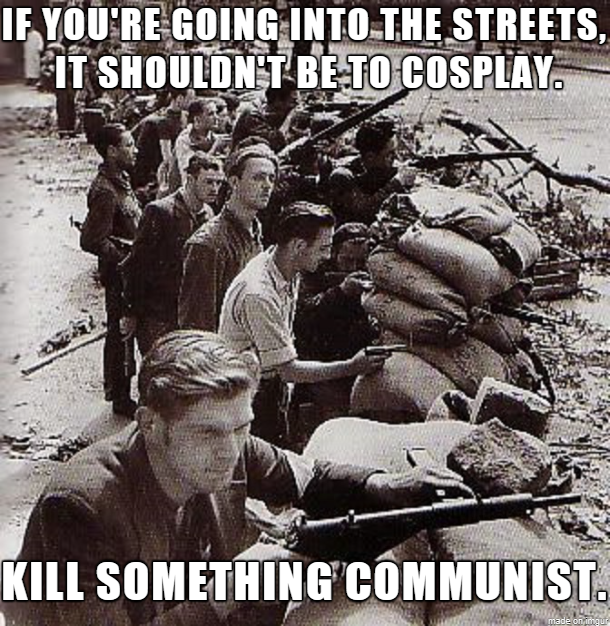 If this happens and its going to take either gun confiscation or mandatory vax to work an maybe not even that , I suspect that famine, disease and General Privation will do most of the work for you.

I just hope patriots keep control of the nukes and navy to keep the Chi Coms from killing everyone in North America for the resources and understand your break it, you own it.

We'll get a smaller Federal government out of this but congrats bunky you also have to run the State, County and Local governments and police large corporations and every institution for subversion. For decades BTW.

You ain't going to run off the Monticello 2.0 and hide there. Its all work all the time and if you don't do it, you'll get a counter revolution and the clowns will return.

I supposed if you pull of exterminatus they won't but alas you won't have labor for much of anything either. Good luck getting the US back into the 3rd world much less the 1st.

Ah well I suppose no one ever said freedom will be easy, not that you will really have freedom since starvation lurks around every corner . You get small government not "freedom" because like it or not, freedom from want is freedom too.

So far enjoying Devil's Guard by George Robert Elford. Lesson learned: You fight the commies every step of the way. Match them bullet for bullet. No quarter given. The convoy escort chapter was both genius and devious.

You have put into words the gut feeling I have had since 2008 when Barky was elected and the crap got serious.

You cannot bargain with bullies.

You cannot argue or compromise with zealots.

We are in the end game and either we rally and drive the invaders out or not. They seek to end us and our way of life.

It takes some guts to stand up and speak the truth. This will not be enough unfortunately.

It takes a patriot who is willing to give his or her life for their country to save it from the communist invaders we face.

Now, it is the time of choosing.

I don't keep repeating the mantra of, "The future is mountains of skulls, rivers of blood, and oceans of tears." just because I like the sound of my own voice, as it were.

By my count, we have at most 160 million possible friendlies, closer to 120 million guaranteed. Assuming we lose 25%, we come out of this with a population of between 120 million and 90 million patriotic Americans, skewed heavily towards younger people. Those are the populations we fought WWII and WWI with, respectively.

Fear not, for a brighter future lies on the other side. Nobody lives forever, and some things are worth dying for. (Remember Patton's immortal words: "No bastard ever won a war by dying for his country. He won it by making some other poor dumb bastard die for his country.")

Unknown, Thank you for the book recommendation.

Funny, whenever you tell folks that 1/2 of the population needs to go, permanently, they start jabbering about voting and other mindless bullshit again. They can't and won't grasp the meaning of victory, or what it entails.
Playing nice is for losers.

My father's best Fallschirmjager buddy (they started out in 1939 and ended up 26 months US POW's together after Carentan) went to Indo-China and then Algeria with the FFL. Was seriously wounded in Hanoi in a Viet Minh fragging.
I've got several nice old pics of them on patrol in the VN villages.

So, does this mean that Ann Margaret WON'T be
appearing at TL Davis's "Lies of Omission"
Film Festival & Patriot Shindig down in Poudunk, Texas after all?!?

Shoot!! an I was all ready to mosey on down
there with my freeze dried bags of Jiffy Pop
and bottles of Dr. Pepper with a lawn chair for it!

Guess San-T-Klaus is bowing out this year too...

NorthGunner - The Truth Is It's OWN Defense

I've said all along; when this kicks off, there can be no stopping until every last leftist is dead. If that is distasteful to anyone, then get far behind me because you're not going to want to watch this episode. It's not going to be clean. It's never been clean. Hardening up doesn't mean just your body. Hard hearts and cold minds are what you need, or it's all over. No more McMansion. No more new truck every couple of years. No more shuttling Suzie and her friends to the soccer match. It's kill or be killed. Just like our ancestors millennia ago.

War has a way of ending arguments that cannot be settled by reason . I have lived a good life and I welcome the opportunity to eliminate as many as I can.

Political tags - such as royalist, communist, democrat, populist, fascist, liberal, conservative, and so forth - are never basic criteria. The human race divides politically into those who want people to be controlled and those who have no such desire.
~ Robert Anson Heinlein

Time is getting late.