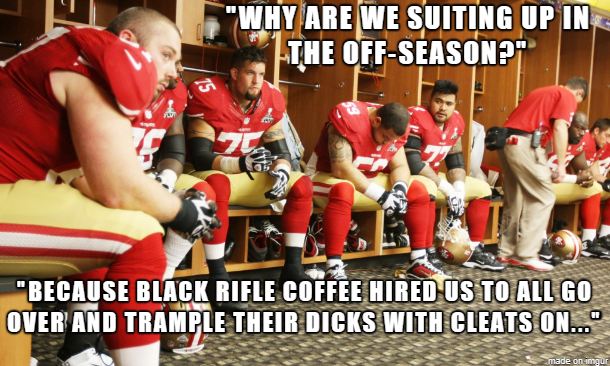 And go fuck yourselves. Sideways. With a dull rusty chainsaw.

And hey, Red Forman left you a message. 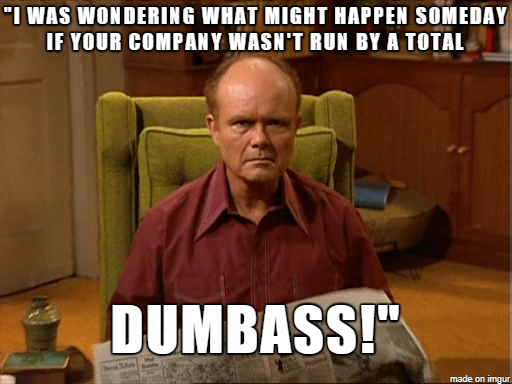 An old Marine Corps buddy stopped by too. 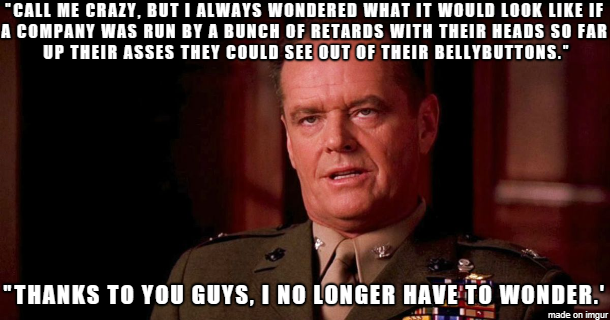 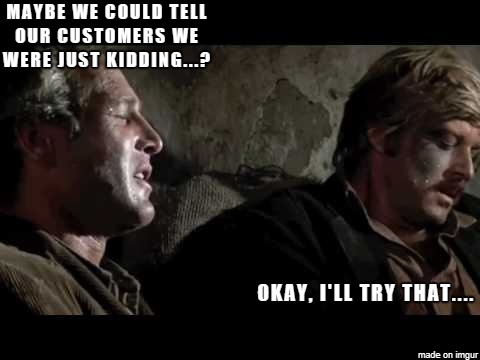 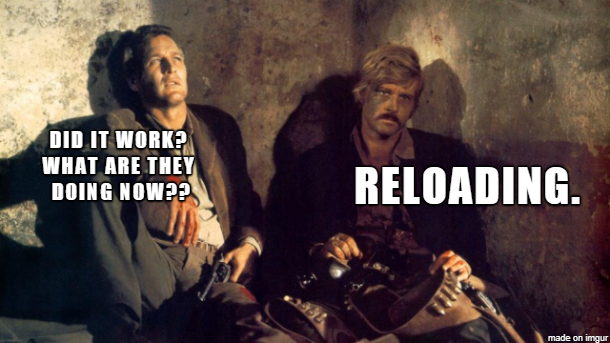 UPDATE:
CEO Hafer claims he was "misquoted".
Bullshit. He got caught stupidly telling the truth, not stupidly being misquoted.
He's at least stupid, or evil. But neither option rules out both being true.
And when you get raped, you cry "Rape!" And you go all-out for blood.
You don't content yourself by claiming they got the color of your underpants wrong.
That doesn't mean no conservatives work for Coffee Of Color.
Harvard and Princeton, not to mention WaPo, ABCNNBCBS, and the NYSlimes used to employ actual conservative heterosexual Christians in leadership positions, too. Even Hollywood still keeps a few of them around, for window dressing.
The name for those people, in the trade, is "suckers".
Word to your mothers, guys: Get off the USS Zumbo while you have a chance.
Posted by Aesop at 9:45 AM

Labels: BFYTW, cleat marks in your dick are hard to heal, fucktards, Social Justice Is For People Who Suck At Economics

I tried to post the following on Defense Training Group last night, but got nowhere. I read your blog this morning, so, with your permission, I am going to put in my 2 cents here:

Why did the BRC guy say that shit? If you are a 100% owner of the company and profits are irrelevant to you, fine. You can piss down the backs of as many customers you like. Your funeral. It's a free country (or it used to be.)

If you have partners or shareholders, to say things that drive customers away is irresponsible. I don't know what the situation is here.

All I know is that the company got much of its support from people who thought the owner(s) was a kindred spirit and a fellow traveler, and they wanted to support him, not just because they thought that the coffee was the greatest gift in the world to the caffeine crowd.

The guy reminds me of some actor who started out in B movies, but whose name then became a household word. After he has arrived at a certain level, he describes his early work as crap and calls anyone who liked it a moron, all for the purpose of sucking up to his new trendy contacts.

I expect that there are some high muckety-mucks at Coca-Cola who regret turning over diversity training to the black in-house counsel whose training program admonished employees "to be less white." I have had only one Coke since that became public, and then only because Coke came with a fast food combo.

I also haven't been buying any Chick-Fil-A food after the CEO shined a black rapper's shoes "to atone for white racism." Pathetic limp-wrist, religious shithead. (Not all religious people are shitheads, but we all know that certain type.) I actually started buying their products because the owner stood up to the LBGT crowd and publicly opposed gay marriage--which cannot be reconciled with Christianity.

Now, it's eff him and the chicken he rode into town on.

It appears this lovely egg of bullshit was laid by The New York Times.
If those cock gobbling Communist twatwaffles told me it was a lovely day outside, I'd get a flashlight and go check, after betting a bottle of bourbon they were lying.

Just went to the site. Didn't see anything woke.

They've sold me the last bean they'll ever sell me.

Wait, a company built their brand on the backs of regular Joes, whom they were obviously mocking, and people are shocked to find out the mask slipped? Not to say that particular company shouldn't get to watch their business prolapse, but lots of griftometers could use some tuning up.

Those guys stunk from the beginning.

The first problem with that PJMedia article is that the author doesn't know his ass from a hole in the ground. If you're anywhere on the Right, and have more than two brain cells to rub together, you know that giving an interview to the NYT is like trusting your ex-wife to tell the truth in a custody hearing. Did Mr. Super Duper Conservahero CEO do his own tape? Has he got a full transcript to post? Nope. It's the old "my very clear and obvious remarks were taken out of context" soft shoe routine. Been sold that line too many times and am fresh out of fucks to give.

Then you look at the guy's social media history and what he's liked and disliked and, wouldn't ya know it? It lines up precisely with his douchebaggery in that NYT interview. This isn't that company's first foray into Shitting On Their Customer Base.

Then you look at the liberal VC firm that's heavily invested in them, and the donations of the CEO and high ranking employees, and by golly, who knew that the super ultra conservative thing to do was donate to Barack Hussein Obama and hire a bunch of Act Blue folks to run your social media? The CEO is a former CIA contractor and his whole branding campaign reeks of a conservative caricature.

They deserve what they have coming, good and hard.

Yeah, Carteach, I'm not buying it. Talking to the NYFT is reason enough to forget them as a concern worth your money. Anyone who talks to the media at this point deserves the shellacking that was planned for them by the presstitutes in the first place.

Then we get into the weeds. He allows the NYFT to define who is a racist and anti-Semite, then blanket cancels those people the reports serves on a platter? No, I'm done with them. Anyone to the right of Che is a racist to them and Coffee of Color knows it. And, though I'm dumber for having read the extended bout of multi-page self-inhaled flatulence that was the NYFT article, most of their article had nothing do with RRRRRRACISM, but instead with the "insurrection" on Jan 6, the participants of whom were unfortunate enough to have purchased this shitbird's merchandise were promptly thrown under the bus by CEO Of Color and his journalistic egger-on.

The proper response to a request for interview, by anyone of us, from any "publication of record" is to refer them to your publicist Pax Dickinson - or to fuck off and die. We all learned this years ago. Where was this B movie actor when that lesson percolated through the head of anyone over the age of 7?

Huh. Wouldn't be the first time some lying-assed reporturd "creatively edited" a quote.

Expect more agitprop. It's what Commies do

@Carteach,
This is all them, not the NYSlimes.
Fucktards outted themselves.
They deserve all of what's come, and what's still coming.
ZFG

I'm good with the desire to reward and patronize LMIs and good folks, but buying a coffee brand to virtue signal is exactly like what the muppets on the left do.

I don't know where the line between supporting and signaling is, but it's a whole lot easier and safer to make buying decisions based on other criteria. Like "is it good for the use I'm putting it to?" If there are many choices, and you need something to tip the scales, consider the politics- but also consider you might be getting played.

Interesting who is trying to cover for their stupidity, as they are in full damage control mode.

If I was meme-competent, I would have something that said "One does not merely walk into a New York Times interview"...

Who, in this day and age, with the wealth of technology at their fingertips (and theoretically a consulting agency) does not record such an interview? The fact that they did not is at best - charitably speaking - of a trust in a media outlet the last twenty years has demonstrated is foolish.

I heard somewhere his wife has a very questionable family background? Was this source reliable?

In the course of my work we often get press of some sort nosing around.
If they come up and ask to speak with or take pictures and film, I ask why, then tell them we will need full editorial approval of any media prior to release, please have your lawyers draw the agreement up and get it to me, I'll forward it along to our lawyers and get back to you.
If they, which is usual mo, just pull up and start setting up. I and/or my crew will begin disrobing and waving at them.
When the microphone comes up the conversation that follows would make a diehard sailor blush.
In 1979 I got a full page photo spread in the New Orleans Times Picayune, in 1980 I got what bordered on defamation. I give the respect I get.