This is the famous Tap Code, introduced by Col. Carlyle Harris, at such garden spots as the Hanoi Hilton, Alcatraz, the Briar Patch, and numerous other Vietnam luxury accommodations for American POWs, where they were treated to rotten pumpkin soup with bugs and worms, with a bit of spoiled rat meat on holidays, like Lenin's and Ho Chi Minh's Birthday, in between having their shoulders and hips dislocated with bamboo poles, while having the soles of their feet beaten with strips of old tires, for the sport and occasional intel gathering of the Soviet Union, Red China, and North Vietnam.

They were kept in solitary confinement for their entire stays, some for up to 9+ years, until the last couple of weeks before B-52s blowing hell out of Hanoi convinced NVN that giving them back, and laying off South Vietnam was in their best interest, unless they wanted a rubble pile for a country.

North Vietnam still got off too lightly, and we should have nuked them on general principles.

Their extra-curricular activities undoubtedly broke, maimed, and disfigured most of the POWs they held for life, which was why they only released the prettiest and least-disfigured fraction (596) of the men we knew (estimates up to 2500+) they were holding. (FTR, they released the last 13 French POWs from Dien Bien Phu, from 1954, sixteen years later, long after that debacle and the subsequent French withdrawal.) The US POWs they undoubtedly shipped onwards to the Soviet Union and China - senior SAC and B-52 guys with loads of valuable intel in their heads during the Cold War - or held themselves for further torture and amusement, either died in captivity, most after 1973, or they were simply executed at some point, to a metaphysical certainty - when the commie bastards running Vietnam to this day and still holding them prisoner got tired of feeding them and playing with them because they'd run out of things to do to them. Anyone alive now would be in their 70s or 80s, extremely unlikely given that sort of treatment. They're almost certainly dead at this point in time. They're not forgotten, and what they left us includes the Tap Code.

The key to using the Tap Code, is understanding how to use the box, above, info that was somewhat glossed over in the links above.

It is properly used by going down, and then right, for each letter. 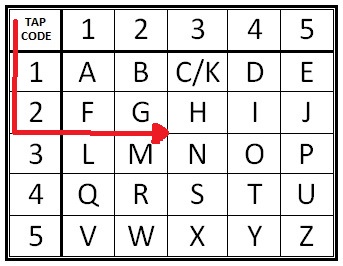 As noted in the exemplar at WRSA and by MB, abbreviations can be, and were, used.

Most of you already know what BFYTW stands for.

Using tap code, that would become:

Numbers are simply numbers, 1-9. (Z or O can be substituted for zero.)

Here's a bit more explanation from the originator:

That, plus memory, allowed guys in a 5'x5' darkened cell to know the names of everyone in their cell block, everyone in their prison, every name of every POW captured, and trade Bible passages, song lyrics, personal stories and details, and anything else, and keep it in their heads indefinitely.

Pray to a merciful deity this remains wartime arcana from before you were born, and doesn't become day-to-day useful. Because commies do what commies do. Every. Single. Time.

They were still teaching this at AF SERE school in the 80's. Once you have the basic format down it's not hard to re-create from scratch in your head. Much easier to use than Morse code, even if the guy on the other side of the cell wall knows Morse.

The (former) United States of America is rushing headlong into that situation. But if that comes to pass (may the Divine save us!), the Patriots may once again need and use that sort of system. Except that there will be nowhere to repatriate them afterwards.

I'm sure the folks being held in solitary in our nation's capital for 6 months without trial or access to a lawyer would have benefited from knowing this. Too late to learn if you're already locked up.

Not for this post, but your last mention of HCQ was back in Mar 20, with the New Orleans ER Doc. What are you seeing hearing about HCQ, zinc, z-pacs, vitamins C, D now? Anything about Ivermectin and its adjuncts (if any)?

Commies are gonna commie. But we know that. I don't think we'll cower in the night.

Not a peep, on any of the above.

Once all that comes to light, everything against them's going to be thrown out, with prejudice. (And if it's not, it's that much closer to throat-slitting time.)
Knowing that going in, I think FedGov has decided that after the first civil rights violation, the next 5000 are free, so why not go whole hog?

If you're not hearing even a peep, then TPTB have effectively muzzled the medical staff.
Take a look at this website. Or this one.
Plug this into DuckDuckGo and see the results:
https://www.dogpile.com/serp?q=ivermectn%2C+and+covid-19&sc=LUflF7KHFbB700
DuckDuckGo is free and downloadable for Windows, Android and IOS.

Nope. It's because they're not primary care-givers, so it doesn't concern them.

If they were GPs or Family Physicians in private practice, it'd be bread and butter.
By the time people come to us with COVID, they're going to the ICU, where all that is locking the barn door after the horse is out, or if not, as noted, something to take up with their own doctor.

In the utterly amazing biography "Alexander Dolgun, An American In The Gulag," Dolgun was in solitary confinement in a cell in Lefortovo Prison, or maybe it was the Lubyanka, it's been a long time since I read the book. Anyway, the guy in the next cell was trying to explain tap code to him with tap code. For weeks and weeks, until Dolgun thought he was going mad, or the other guy was mad, the other guy was tapping 1-1, 1-2, etc, all the way through 30 letters of the Russian alphabet. Dolgun just could not get it. When it finally "clicked," it was a breakthrough that saved his sanity and his life. The two immediately began telling their life, arrest, torture and confinement stories.

Dolgun's story is invaluable on many other levels, the tap code story is about 1% of what you will learn that could save your life in a Gulag, Soviet or American.

Also, somebody above mentioned Morse code. It won't work for tap code, you can't do long and short taps. A tap is a tap.

Another trick is to use a mnemonic device to remember the left column.
I just came up with this, I'm open to better suggestions.

HCQ and Ivermectin WORK, if given early. Zinc ionophores also include quercetin. My transplant recipient wife was dramatically improved after two doses, before she received Regeneron, the monoclonal antibody. Criticize its use if you like, but you have little to lose and a lot to gain by taking it. It is inexpensive and has few adverse effects, relatively nontoxic.

Thank you for that video.

I was an NROTC midshipman at UVA from 75-79. One of my professors of military history was a Vietnam POW who had been shot down as an Ensign at the very beginning. He got married on leave circa 1965 in Hawaii or Japan to his HS sweetheart, and was shot down weeks later. She kept the faith and was waiting for him when he was repatriated almost a decade later. She had saved all his paycheck money except for living expenses. He could not fly anymore because rope torture had messed up his arms and shoulders to bad. (They'd leave you hanging in positions that dislocated your shoulders. Fuckers.) His wife had matching white Mercedes Benz sportscars with HIS and HERS vanity tags. That was one woman. Ed Davis was one hell of a man.

Our classes on navigation or whatnot usually ended up with CDR Davis talking about his experiences in the Hanoi Hilton. This is where I learned about tap code and GBU. Later, I read the Russian version in "Alexander Dolgun, an American in the Gulag."

When asked if he hated the North Viets, CDR Davis said no, because some of the guards, at risk to themselves, snuck into his torture cells to loosen his ropes and make him more comfortable, saying they were also Christians, and praying the Lords Prayer with him. He blamed Communism for their inhumanity. Some of the worst torturers were Cubans sent by Fidel to help break the "Yankee Air Pirates."

When the B-52 raids of "Operation Linebacker" began on Hanoi, the guards suddenly became friendly, increased rations, and let them out of solitary to have group detention. The guards said, "Remember, I didn't mistreat you!" They were sure the Christmas 1972 B-52 raids were the prelude to a MacArthur-style "Inchon" amphibious invasion and defeat for the Communists. They were shocked we did not land and take over Hanoi. But most of the Hanoi POWs did get out the next year or so.

@Matt Bracken: To use Morse in this situation, tap for a dot, scratch or slide your finger for a dash.

More complex than Tap, and it won't travel through walls and pipes as far as Tap, but it is doable.

Not optimal but doable.

That being said, I would (and have in training) use Tap.