Say, Mayor Dipsh*t, About That Bullet Hole In Your Foot... 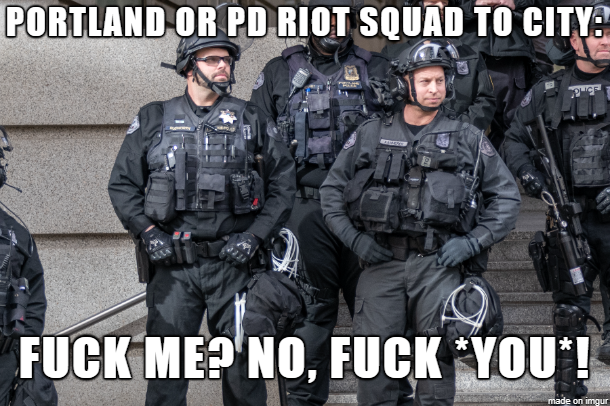 Shit just got real for the Portland PD.

The day after one of the members of the Portland OR PD's 50-man Rapid Response Team was charged with excessive use of force during one of the daily riots there, the entire 50-man squad resigned their positions, and will solely perform normal policing duties, leaving no one trained on hand for dealing with any trouble at any crowd gatherings.

IOW, PPD has just greenlighted rioting ad infinitum, until the District Attorney, the mayor, and the city council all get a crowbar, break suction, and pull their collective heads out of their asses.

Open street warfare and two-way firing range between citizens and hooligans in Portland 24/7, in 3,2,...? Open season on rioters, and screw the bag limit?

Once the BurnLootMurder/Antifa-tards start getting Rittenhoused, the premiums of life insurance policies for the anarcho-communists are going to hit the stratosphere. Boo frickin' hoo.

No points for guessing what police response times will become, if local citizens begin "taking out the trash", and one must also expect that the clearance rate for such homicides will drop to the low single digits, in perpetuity.

When DemoCommunists step on their own giblets this hard, with cleats on, it's not funny until it's not funny. Then it's hilarious.

TPTB in Portland have just been put on notice:

One kicks one's watchdogs at their own peril.

Labels: cleat marks in your dick are hard to heal, comedy, Community Policing

They may have resigned from the Riot Squad but, they stayed on the Police Force. Gotta protect those pensions.

So they are basically virtue signaling their discontent.
No way they are gonna really take a stand and give up their pensions and paychecks.

I think that they're about to get what they voted for, good and hard. Got any popcorn?

Anyone, call us when you quit your job because your company is "woke". I'll be waiting right here for that report. Let us know how it works out for ya. Last I looked, some guy who was his own boss simply refused to bake a cake, suffered financial ruin, and had to go all the way to SCOTUS just to get judicial relief from the injustice.

In the meantime, that was an additional duty, with lucrative overtime. (If you think the po-po don't like overtime, you don't know them very well.) Quitting en masse sends a message, and rather pointedly puts the entire city on notice that the city government is the one driving the riots, subsidizing and supporting them, against the law, against law enforcement, and against the citizenry. And there will be retaliation against those officers if nothing else changes, in dozens of ways, both individually, and institutionally. Job performance reviews, raises, promotions, assignments, benefit of the doubt from here forward in any incident, etc. Acting like this was a cost-free act on the part of those cops is merely underlining that one doesn't know that, and doesn't know how much they don't know.

To be butthurt that they didn't kill themselves, either professionally or literally, to show true solidarity, is a sophomoric point of view. The message was sent, and it will be received. By the citizens, the city government, and by the rioters.

All they did was publicly wash their hands of the crucifixion Portland officials are about to receive for instigating the ongoing criminal unrest there. Anyone who can't see that isn't tall enough for this ride.

And I doubt the police voted for what's about to happen. But the city government, and a goodly number of comrades in the People's Republic of Portlandistan did, and they're going to get exactly what they deserve. The PPD just let them know that, by special delivery message.

Living outside the law applies in all sorts of ways, to every extent possible.
The idiots at the civic center are about to learn that, in a "Hey!-Your-ass-is-on-fire!" kind of way.

Just remember, kiddies, when taking out the front-line rioter, to also take out their handlers and shot-callers. Those are the people on the sidelines or just behind the front rank that are 'only' carrying cell phones and taking 'video.'


Seriously, yes, get kinetic with the front rankers, but don't forget the ones in actual control.

While never having worked for a woke outfit, I have on 3 different occasions quit a good gig because the the owners were doing something I found morally repugnant.

I stand by my comment that those swat/sru guys have no honor.

You just reinforce my stance by saying that it is not a cost free thing they did. So they are gonna stay and suffer repurcusions, no raises, no promotions just so they can keep the paycheck and the pension.

May their chains rest lightly upon them.

The only downside in reading it is that readers like John Henry Eden and Charlie seem to love it, too, and they express their neanderthal opinions.

Sharing "internet company" with fucktards like them spoils the read sometimes. I suppose that if you're still living in your mother's basement or in your Unabomber cabin, that attitude is common/aceptable, but still...

What evidence do you have that "they" voted for anyone? After 2020 reveal, what makes any of us at all sure that we've been voting for anyone? Like Morpheus told Neo in The Matrix, "You think that's air youre breathing? "

After the vote rigging and fraud we've seen, there's good reason to suspect that every "Blue City" is a lie, a cleverly concocted story to cover massive vote fraud that always, *always* puts into power the corrupt, incompetent, marxist tools that the Oligarchs want. Sure, there's a 20 or maaaaybe 30% that are stupid or Kool Aid drinkers who vote for the Evil candidate every time but it's far more likely that every one of these so called Blue places we are told vote 99.99% Democrat is a lie. A lie that ensures that no one will audit the votes or even bother running an opposing candidate. That's the dirty secret of America: we don't have elections, we have electoral theater while behind the scenes the Oligarchs have been rigging the results.

So let's drop our smug satisfaction that hell holes like Chicago and Baltimore "voted" this on themselves. Their cities were taken over by a criminal enterprise and some people are too poor or too brainwashed to move away. We are all complicit when we perpetuate the lie of Blue anything. Blue is a minority everywhere but they act like a majority and steal like a majority and we are all too lazy or afraid to do a damn thing about it, except snark online.

You have absolute evidence for voter fraud multiple times, and a massive electoral theft the last time out.

You have zero evidence that everything everywhere has been stolen since forever.

The former is common sense; the latter is too much caffeine and too many black helicopter/chem trail/conspiracy theory comic books.

This. This is why we can't have Portlandia.

That's a bit strawman, A. I never said everything everywhere has always stolen. My point is that the idea of deep blue anywhere, at least in terms of big cities perpetually voting in corrupt rulers, is a fabrication. It is no stretch to believe that both parties cheat in elections. The Dems are likely far better at it, but given what we have learned about the Dominion machines hackability, it would be naive to suppose that they haven't been manipulated to steal elections from day one, everywhere they are used.

Are you seriously saying that *anything* is impossible now with everything we've seen in 2020? The ugly truth is that the black helicopters and chem trails and conspiracy theories didn't dream big enough. The reality is far worse with governments intentionally infecting their populations and then denying them effective treatments so they can inject them with experimental gene therapies while enabling racist gangs to burn and loot under fake martyr signs. We are way beyond chem trails, brother.

Which is kind of where I'm pointing Tschifty.

Stick with the realities we know and can prove, (which on their own are quite bad enough) rather than letting imaginations run wild, and sounding like a fritcake.

The envelope on fraud has obviously been pushed until it is pear-shaped.

That doesn't mean it's the size of Alaska.
Nobody wants the "I'm not saying it's aliens, but it's aliens." guy on their PR team.

What will happen is the riots will continue and the orders will go out that the Proud Boys are to be arrested but not Antifa.

Some riots are more legal than others don't you know.

That said there are plenty of ways to obey orders that make things not happen and Portland PD who BTW are a bunch of hardases at heart isn't happy and likely know them all. Whether they will or won't? Who knows.