Vaxxholes, And The Rise Of The Resistance. 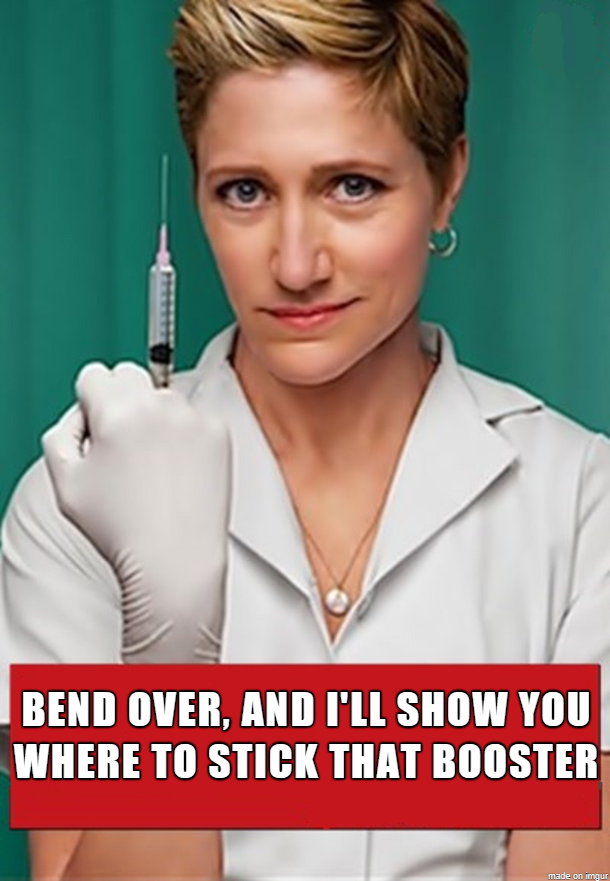 So, it turns out the reason the ED was short-staffed the last two weeks, is that something over 50% of the ED staff, and including several of the docs - the ones who were "fully vaxxed" and boostered - all got Kung Flu. (We don't test for variants as such - and neither does anyone else, BTW, in case you wondered about that b.s. - so no one has any wild idea what strain got them).

Unvaxxed me: still negative for two solid years, and still forced to test twice a week at work.

Anonymous Idiots in the crowd: Keep telling me masks and handwashing don't work.

Similar stories in the rest of the hospital.

So now, HR and Infection Control have told them to return to work after just five days. (Because Kung Flu magically dissipates in health care workers after a few days, apparently.)

The one bright light: After three bites at the apple, many of them have said "Fuck another booster. Fire me, or fuck off, but I'm not getting any more of those worthless jabs!"

So they're not jet-fueled geniuses, but they are teachable.

Labels: Kung Flu, Vaxxholes, Whatever Doesn't Kill Me Really Pisses Me Off

"So they're not jet-fueled geniuses, but they are teachable."
Better late than never.

Worthless vaxx? No, the gene therapy is so much more:

Of course it's so much more.
But with the ignorant, baby steps...

Morpheus warned you most people aren't ready to be unplugged from The Matrix yet.

Most are too far gone

Anecdotal-but close family member works the ICU/Covid ward in one of the larger Ky cities.

Never had Covid, not jabbed, let alone boosted. Multiple nurses, and some doctors who were fully vaxxed (some included boosters) not only caught Covid but spread it to their other fully vaxxed nurses and docs.

A few are finally asking why my family member hasn’t had Covid and been out sick after some have been out multiple times even since being vaxxed.

If they are asking questions, perhaps they’ll listen to a different answer outside the mainstream approved narrative

That's a hell of a collection of papers.

Hey Aesop. I got the Rice Rabies. Guessing that's one of the weaker varieties. Been six days so far. Minor case of the sniffles. My only symptom. Guessing that's probably due to my already healthy life style and taking vitamins for two years.. Probably got it from the freaking covid pos bums or drunks that the do gooder docs like to fill the behavioral area with for three days. Instead of chucking their ass out ASAP. Either that or ER getting swamped by two groups of people:

1)People that want to get tested because they know somebody who got covid. Only they have no symptoms, and they're too stupid to get tested at any of the 30+ places in town.

2)Young moderately people who have covid, but are only experiencing mild symptoms. Too stupid to stay home because there is no need to go to the ER with mild symptoms.

So, masking works for you, but not for anyone else in the same hospital?
It couldn't possibly be that you're naturally immune, like so many other people.


It couldn't possibly be that you're naturally immune, like so many other people.

Or maybe he just does it properly and they do not. And does it consistently while they do not.

"So they're not jet-fueled geniuses, but they are teachable."

They only had to touch the stove three times.

"Anonymous Idiots in the crowd: Keep telling me masks and handwashing don't work."

So are you the only one that wears one and washes their hands? Or maybe you are taking vitamins/supplements that fortify your your immune system? Or maybe you got a mild case, didn't realize it and have natural immunity? Maybe you're keeping yourself fit? Maybe you irrigate your nasal passages every night? Maybe it's something I'm not aware of?

Whatever the reason. Wearing a mask has very little or nothing to do with it.

Hence my comment.
1) I'm the only one I have 100% knowledge of 24/7.
2) Nope, nothing at all.
3) Haven't been sick at all since this started. And I usually catch everything once-twice/yr with colds/flu/URIs.
4) I wish.
5) Nope.
6) already told you. I wear a mask, including just a simple snot mask away from work, and I douche the paws with hand sanitizer coming and going. That's it.

I wear the requisite N95 at work, at halitosis range with infectious, contagious, and moderate- to severely-ill COVID patients.
On my own time, I wear a simple T-shirt grade snot mask indoors (not alone, outdoors, or any other stupid thing) - properly - as a courtesy to others, and handwash with alcohol hand sanitizer. The only decon for said snot masks (3 or 4 of them, rotated around) is the occasional trip to the washing machine, and leaving them on the car dashboard in the sunlight between uses, for UV.
Amidst a pandemic spreading like wildfire, in multiple contagion spikes, amidst the largest urban/suburban population pool of stone-smart knuckleheads in the country. And 9 of 12 vaxxed and boostered co-workers who all got the latest variation. (The unvaxxed, like me? Zero 'rona.) Yet no Kung Flu for me.
That's. It.

Trying to pull any thought of "natural immunity" out of one's nether parts is a total "deus ex machina" fallacy.

Wearing a mask and regular handwashing is the only other remaining variable, and thus the entire explanation (besides no Not-A-Vaxx in my arm, nor ever will be).
Which, shock of shocks, accords exactly with both all scientific knowledge before 2 years ago, when politics entered the fray, and lines up exactly with experiential data that the vaxxed are 4 times more likely to get follow on variants than the unvaxxed.
QED

"When you eliminate the possible, whatever remains, no matter how unpleasant or seemingly impossible, is the truth." - Sherlock Holmes

I understand you are the only one that you can be sure of but do you believe you're the only person that's as fastidious as you are about wearing a mask and washing your hands? That all of those coworkers(unvaxxed ones of course) who came down with it were careless?

Also there have a lot of accounts of folks having the Chinese flu and not knowing it because the symptoms were so mild. I understand the PRC tests can be spun up to find everyone positive but there's got to be some legitimate cases of folks getting it and not realizing they have had it. Now I think I've had it and believe me, it was harsh and I'm very fit albeit old. That isn't to say that the other end of the spectrum isn't viable and you might have picked up a natural immunity. You can address that better than I.

Finally I thought the primary use of N95 masks was to reduce the emission of particles and that stopping inhaling of the Chinese flu virus is much more difficult because of the small particle size of the virus?

1) I have empirical proof, which cannot be faked.
2) None of the unvaxxed co-workers caught it. Everyone who caught it was vaxxed.
3) "Natural immunity" is deus ex machina. It's shorthand for GOK: God Only Knows. It's the Easter Bunny of explanations. When someone backs it up with a scientific rationale, we can talk about who has it or not.
4) N95s are to protect the wearer. Simple masks are to protect everyone but the wearer, by containing exhaled virus particles. By actual testing (rather than internet guesswork) they stop between 100x and 1000x more particles escaping than wearing nothing.

That's why they work, contrary to the idiotic whining of the anti-mask brigade. Their protection of the wearer is somewhere between minimal and non-existent, unless everyone has one on properly, and even then, it's nothing like the efficiency of an N95 or better.
And no one, AFAIK, has conducted a similar study, and concluded "masks don't work". They've conducted assed up non-studies, and studies with twenty-seven unknowable variables, which is voodoo and hand-waving magic, not science.

Face masks work exactly how baby diapers work: they keep the crap in baby's underoos, rather than letting it splatter everywhere. They don't stop baby from crapping his pants. If you have 100 babies at a party, how many bare-assed babies does it take to get shit on the sofa or the carpet? One. Face masks work to the same degree. Not perfectly, but a vast improvement over nothing.

Stopping viral spread significantly isn't hard at all, because this virus - like most of them - doesn't move about free and dry like powdered cocoa, they only travel in mucus droplets, which are larger than bacteria, which is how you can tell the difference between someone who knows what they're talking about re: masks, versus someone who knows only enough about microbiology to dangerously get it wrong, because they took a 5-second "class" on the internet, generally from another lackwit. The problem for everyone is that those witless idiots don't come with a big "L" on their forehead, so you can't tell them right away, and it becomes hard to spot the moron in the crowd just by reading their drivel. Much like picking out a crap study from a legit one, you have to drill down a bit. I've looked at, to date, something like 50 studies on masks, and seen just the one (above) that set the test conditions up properly, and asked the right question, after eliminating all but one variable. The rest have been sheer crap, that never should have seen daylight, with flaws big enough to drive a truckload of virus through.

Those kind of "studies" are how you know you're getting politics and advocacy, and not science, 99% of the time.