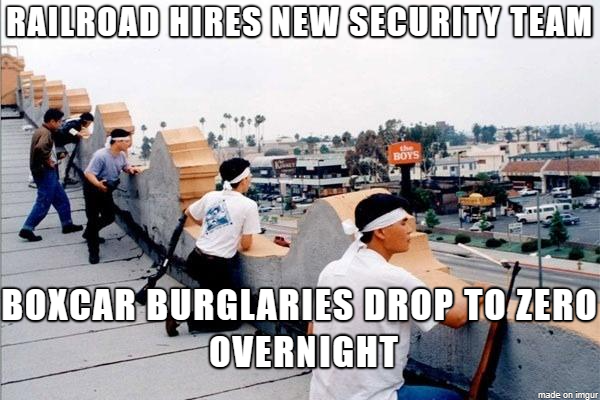 And as to the furious finger-pointing and CYA I told you about over this?

Turns out Union Pacific bears most all of the blame for the current state of things after all. 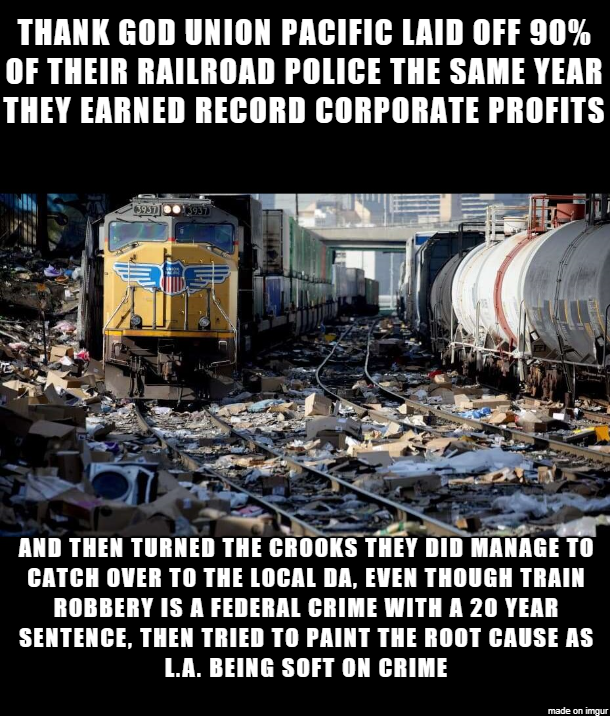 Just like I told ya, and confirmed in Comments.

Just cleaning up all that trash along the tracks would probably help reduce thefts some. It is well known that criminals feel emboldened in squalid environments, because they can see with their own eyes that if a place is full of trash and graffiti, the authorities simply don't care about the area.

Obviously, shooting the thieves would work too, as you suggest. That would of course require rehiring the massive numbers of special agents they laid off during the pandemic (even as they were raking in record profits.)

So, UP has a number of things they could proactively do that don't include whining about the DA, something they can't realistically change.

Yes, it's true the DA is a Leftist poo-flinging monkey. That doesn't prevent UP's officers from arresting people and then turning them over to the Federal prosecutors. Railroad tracks are explicitly interstate commerce, you see. Perhaps the DOJ could do some actual good for a change.

I'll make sure to hold my breath while I wait.

To troy in AL, the theory you cite is "Broken Windows". Guiliani used it in N.Y.C. and it worked to make Times Square safe and great again. After Katrina, New Orleans put in a half hearted attempt and it failed.

It means rule of law. Law enforcement right down to jaywalking tix. Zero tolerance for scofflaws. BUT it requires D.A.'s and judges, not the social workers masquerading as such.

RR never lost its historical right to provide its own self security. It abdicated and chooses to let taxpayers provide protection via L.E.A.

That said, I appreciate the memories from the meme. I lived those riots and cheered the Asians who boldly protected their businesses. "You want some of this? Come and get it. Don't start none and there won't be none". The latest riots throughout the country gave me chills but gave us a bold 17 year old David.
Mississloppigarro

The Railroad Police have had no problems in the past tossing hippies and hobos sneaking a ride on said Railroads. Not use why they won't shoot looters.