The first two Godfather movies should be required viewing for Political Science 101. It's Plato, Machiavelli, von Clauswitz, and Sun Tzu, in Technicolor.

Bonasera comes to America and finds freedom, peace, law and order, circa 1990.

Then young punks (Putin) rape his daughter, twice, once by taking Crimea back, and again by putting paratroops in street clothes into Donetsk and Luhansk, and claiming they wanted "independence".

Finlly, Putin comes back to rape and pillage a third time, and Bonasera goes to the Godfather (the West) for justice.

The Godfather sends a couple of Clemenza's people, Javelin, NLAW, etc., over to break the punks' legs, and now Bonasera finds himself forever indebted to the Godfather.

Putin hasn't been able to take Ukraine in three months and tens of thousands of casualties of trying, and he's bleeding himself white for the effort. And the Godfather is upset with him for disrespecting his protection.

All Putin can do is scorch the earth, endlessly, and win a mouthful of ashes. He's a proud fool, and a slow learner. When broken knees don't get the point across, the arms will be next.

But the West could snuff out Ukraine's candle with the snap of a finger, merely by withdrawing any further aid. 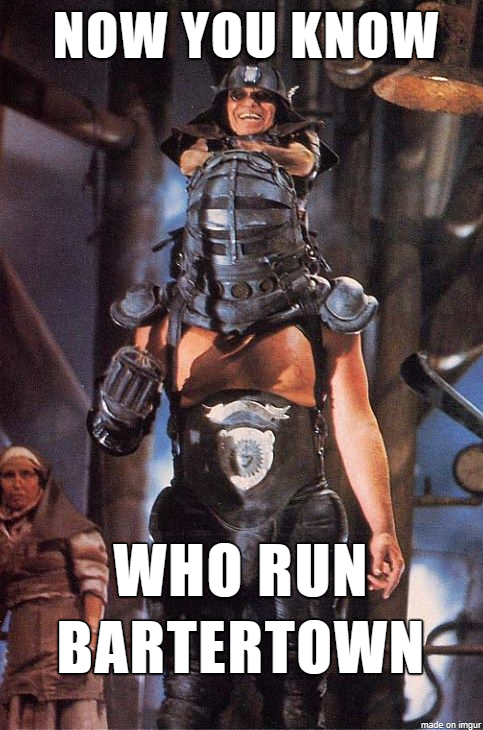 Nightmare Scenario. How much love will Western Europe show for Ukraine when their own citizens are freezing in the dark with no Natural Gas for heating and electricity?

When the other option is bending over for Putin, I think they'll clear their forests and burn the wood for heat first.

I hope you are correct and they will stand up to Putin and Russia.

These are the people that think Windmills, Solar Panels and Unicorn Farts are the way to power a technical civilization, not coal, Nuclear, Oil and Natural Gas.

The "Good Europeans" also thought President Trump was a crazy militarist when he demanded they actually follow their treaty obligations and spend 2% on their own damned militaries.

They are also the grandsons and granddaughters of the same Western Europeans that let Nazi Germany dismantle Czechoslovakia over 6 months, all the while claiming "Peace in our Time!" Peace in our Time?

These are the same people that kept their own troops chained up on the Western Front when the entire German Army was invading Poland and splitting it with the Soviet Union. They did not even threaten an attack on Western Germany.

One year later the Wehrmacht was drinking champagne in Brussells, The Hague, and Paris while they banged the local bimbos.

Eastern Europe remembers the Soviets. They will not concede.

Western Europe will bend over for Putin. And they will claim it is "Peace in our Time" all over again. The corporate media here and in Europe will tongue bathe them too. Pedo Joe or ditzy Harris will probably fall in line too. (Unless China tells them not to.)

That might be true for the people of Western Europe, but less so for the governments there.

Russia's future export will be extortion. The Russian invasion of the Ukraine was most likely to get control of then gas reserves and the BlacknSea ports of the Ukraine. All the yelling about missiles, NATO, and Russian history are just distractions for the rubes. NATO is already in Poland and the Baltic states.

At the Battle od Dier ez Zor, during the Trump years, Putin tried to run a Group Wagner mech column into eastern Syria. That "surprise":was met with Predator drones, a wall os Apachies and ~150 aircraft including F-15s, F-15 Strike Eagles, A-10s, at least one AC-130, a sky full of AWACS and tankers, and at least one BUFF (B-52). I don't know what the current load-out is on a "strategic" BUFF, but not too long ago, there were a dozen air-launched cruise missiles under each wing, with "big stuff" in the belly racks. The Russians never saw it coming. Looking at the map, north of that battle site is the resort area, The Crimea, and further north is the old historic trading site known as Moscow. The several "air shows" in Syria made it clear that our stuff works, and that the world is mapped to a ridiculous degree. It was a fine gangster threat. "Anytime......"

Then threats of sudden, un-announced attack options were nothing new to the Muscovites. The invasion is not about our/NATO missiles, it is all about extortion. And a demented President and a conflicted ruling committee who changes his diaper. No one has said a word, but I think this has gotten Europe's attention. Fight in the Ukraine now or be strangled later. I guess we will see how much blood the Tsar is willing to spend.

Regrettably true enough to be painful

You might have thought, whenever your thesis coincides with whatever lies the MSM is spewing, that Soros, Clinton, Biden, Schumer, Pelosi on down the line are behind and pushing the lies 100%, maybe just maybe one might re-think a few things....

Well, the MSM has begun to turn tail, but we know you won't, will you? Little Miss Can't Be Wrong

I can’t wait for Aesop to respond to Lee Greenwoods cowardly pull out of the NRA event because “it would have been bad optics for him”. I saw him on Fox at my parents this morning (I know, they’re going to vote harder) where he managed to promote his song, the fact that the troops love him and his new endorsement for Blackcat Fireworks ( if public a new short) over the deaths of the innocents.

I have no need to turn tail, Pat.

If the Ukrainians start to do that, they'll be the ones to suffer for it, and I'll have no problem noting it. I'll cheer on anyone who stands up to fight a dictator for their own freedom, but if someone would rather cheer dictators and jeer those fighting for their freedom, that's their problem, not mine.

To date, it's Russian forces falling apart.
But no war is over until it's over.

Your error is thinking there's a way for Russia to ever "win".
I said from the outset they could take the whole country tomorrow, and shoot Zelenskyy by noon, and their strategic failure will still last for decades.

I wouldn't even piss on Lee Greenwood or the NRA if they were on fire.
But I'd happily cheer the screaming that would result from such a fire, and gladly donate matches to the cause.
Both should be consumed by conflagration, as soon as possible.

Are the Putin Humpers ever going to acknowledge that if the end result is Russia is the primary influence in the Donbas that Russia basically lost?

Are Zelensky's fluffers ever going to acknowledge that the return to Status Quo Ante is basically a loss for Ukraine?

I'm no fanboy of anyone and try to look at events through the impartial eye of an analyst, and it sure looks like the Ukraine military is on the verge of collapse.

Based on what, exactly?

Bear in mind they were "on the verge of collapse" on February the 25th. In relative terms, their army was outnumbered by the Russian Army at something between 4:1 and 10:1. It's now nearly June, and they've been taking back areas Russia formerly held.

Are they beaten up? Weary? Under-strength? Ill-equipped? Undoubtedly.
When the Russians move into Kyiv, they've collapsed.

In the meantime, it seems to be a slow, grinding slog for either side.
Considering that conventional wisdom (including mine) was that they should have been wiped out and mopped up by D+7, I think they're doing far better than expected.

Nobody, least of all me, ever said they were going to wipe out the entire Russian Army, nor have they ever included marching to Moscow to dictate terms to be their brief for this conflict. They just want to be LeftTF alone by Russia, which is a reasonable expectation for any nation. They're openly talking about taking back the stolen territories of Donbas and Crimea, and for that, based on Russian performance, they've even got a shot.

Russian victory conditions that don't get Putin deposed (or worse) are unconditional surrender. (And even then, Putin gets a protracted decades-long insurgency he can never win, short of absolute Ukrainian genocide, which would require dealing with the 5M or more who've fled as refugees to the West. So not happening either.)

Ukraine victory conditions are simply to survive and exist.

The latter is the far easier task.

The Ukes may yet collapse militarily, and even lose completely on the battlefield. Given the odds, not a particularly surprising outcome, but I wouldn't put my chips out there yet.

Russia loses no matter what they accomplish.

And the only way to minimize the Russians' inevitable loss is to shoot or depose Putin, and withdraw in haste.