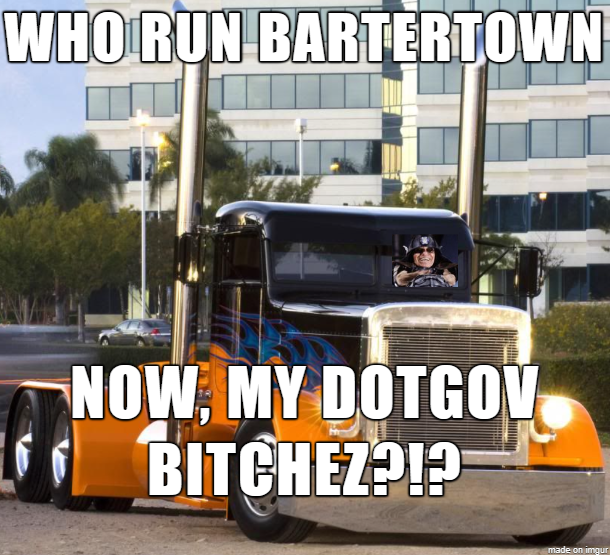 Anonymous Commenter thought this was more "playing in the streets".
Au contraire.
Truckers aren't playing.
They understand this the minute they set out.
Every day they're convoying, or sitting parked, they're not hauling anything, anywhere.
That's a weapon, a tactic, and a strategy. There's only so many of them, and they can't be shat out like bad tacos whenever you want more.
"Public humiliation and beatdown" from three-letter agencies?
It is to laugh!
Point a loaded pistol at your own junk, and tell me to get back to work, or you'll pull the trigger.
Go ahead on. I'll wait right here.
Tell me how that turns out.
Freezing them out of fuel?
Same thing, on steroids.
You can't strategically and surgically cut off fuel like that anywhere.
(BTW, who hauls and delivers all that fuel? And you figure that oil companies are going to sit still in dotGov's pocket while you try that? As if this banana republic couldn't fuck up a crowbar in a sand pile if they tried to organize that? Let me know when the penny drops.)
The dotGov cannot afford any Boston Massacre/Waco moments. That would be the trigger that unleashes the hellstorm, coast-to-coast, simultaneously. And you can never stop the signal.
This is exactly the swordpoint pointed at government's throat that they can't fight, they can't ignore, and against which they're ultimately powerless to take action without cutting their own throat.
Truckers are not playing, from the moment they set out to do this, and they can accomplish more pain without firing a shot than all the dopey rallies could, combined, even if they'd all showed up with guns blazing.
This is how you bring a rogue regime to its knees without firing a shot.
DotGov can surrender. Or unleash open conflict, which invites everyone to play.
There will be no status quo ante to this party.
And that's what scares hell out of TPTB.
It's their own Kobayashi Maru scenario.
And they're going to fail, in an epic way.
UPDATE: For those who still can't grasp this situation, allow me to explain further.
The Jesus Nut
No, this has nothing to do with religious zeal.
Back in the day, one of the multiple howitzers I was expert on was the M114 Tub O' Shit, a WWII relic, 6+ tons of dogface- and Marine-proof hardware, fondly known as "The Pig" (because it was ostensibly made of simple pig iron, but really just steel. It was, however, a cast-iron bitch to move any which way, and ate rounds like a pig, hence much better nickname reasons). Atop this beast were large nuts, which held the recoil system together under formidable pressure, both when firing and at rest. They were known as the Jesus Nuts. Because "If it comes loose, you better start talking to Jesus." Helicopters have similar items, and for similar reasons, I am given to understand.
So do societies.
Truckers - everywhere, at this point - have twigged to the fact that they are one of the Jesus Nuts holding society together. Single Points Of Failure.
Robert Gore (h/t WRSA) breaks it down for you in magnificent depth: RTWT.
This isn't a movement. It's an avalanche.
It's far too late for the tyrants to vote, let alone the pebbles.
Posted by Aesop at 8:10 AM

I hope your right, but history has shown as many (or more) bloody massacres as successful insurrections.

Your assuming Intelligence in the Politicians and lack of enough Malice in the Powers that Be (not the same people BTW).

BTW what % of truckers will suddenly STOP driving in your educated assumptions?

And for how long? Long enough your job in the ER becomes a moot point as lack of water purification (water 3 days without, eh?) and medical supplies shut everything down?

A few well-educated QUIET folks could easily shut down the Imperial City for much the same effect.

Yep the wailing and gnashing of teeth will be glorious when they park the trucks on both sides of the border. I can hear the "government come save me" now. They don't understand the greatest lexicon phrase in the world, no one is coming to save you. They are stupid but they will learn it. Adversity is still the greatest teacher of all and the education systems have created a lot of it and no I did not misspell diversity.

You're still not getting it:

Bloody Massacre = Successful Insurrection
Sometimes, there are no elegant victories. You just have to bomb Tokyo with B-25s from a carrier to make the point, knowing some people might get beheaded.

A few quiet professionals doing the shutting down would be painted as Right Wing Extremism, at the speed of electrons.

You can't do that when the national news shows thousands of truck drivers doing it.
Or haven't you been paying attention to the haps in Ottawa recently?
Turdoo looks even more incompetent than Gropey Dopey, and his regime is hanging by a thread.
If the rest of the truckers elect to sit on their hands and pull a general trucking strike, he's over, for good, forever, and he'll be lucky to flee to the airport into exile ahead of the pitchforks and tumbrel cart.

Truckers have been and are your original Road Warriors.

i have always preached that when the trucks stop, the US stops...

This is gonna go pear shaped fast once it starts heading south. Yes, there's gonna be a Canadian version of Waco, Ruby Ridge etc. The parasites will not abdicate voluntarily. If you think they will, read some historical accounts of regime change. Yeah, there's gonna be blood in the streets and bodies dangling from lampposts and bridges before it's over. Get your preps in order. Get your garden planted and your canning supplies laid in. If you think the supply chain issues are bad now just wait till all the ports and transportation hubs are shut down due to conflict, strikes, embargoes and sabotage. Take note: the vast majority of ports and shipping hubs are in or close enough to be in communist controlled cities.

Got this from a friend overseas this morning.

turdeau will not suffer and may not stop as soon as he should.