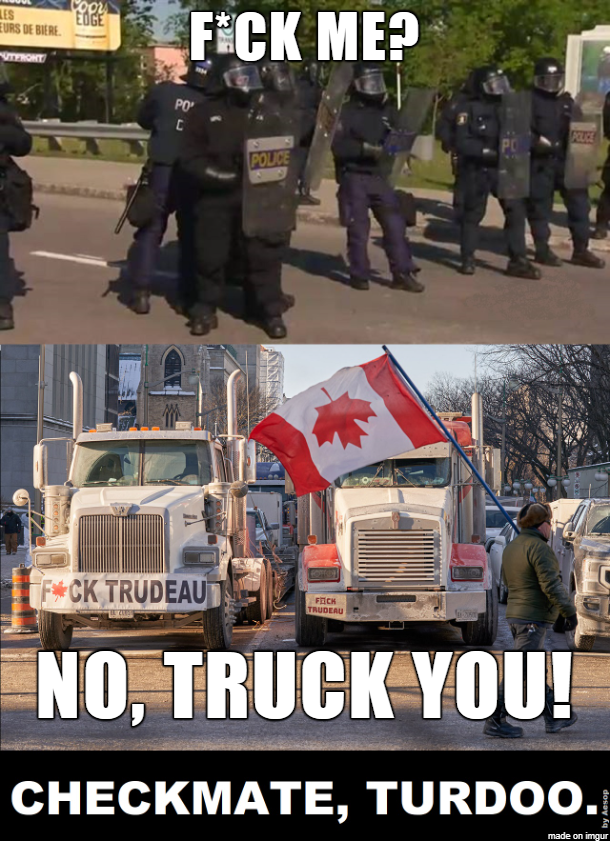 The Canadian truckers are holding a Deadman Switch: "take them out", and you also take out all deliveries to and throughout Canada of anything: fuel, food, Everything.

In chess, when all the opponent has is a king, he cannot attack.

Turdoo is now checkmated, and has nothing left for offense that doesn't cut his own throat, politically and permanently. And it galls both him, and all TPTB, that mere truckers have pointed the knife so accurately.

Now we find out how accurate the "nine meals away" model of societal distress is, don't we?

And Coming Soon: The American version of "Truck Fudeau" is in the offing, with the promise of the exact same scenario.

Squeeze off the ballot box, and the jello will squeeze out between your fingers in new ways.

While the American elites could helicopter out of the District of Criminals under duress, if they do so, the capitol goes up in flames. Which would likely open the ball nationwide, everywhere you have a blue hive idiot in charge.

The peasants are learning how to wage 4G war.

And now, an appropriate air:

[For one small historical reference, AFAIK, there was only one strike by the Teamsters against the motion picture industry anytime since the middle of the 20th century. Hollywood studios held out for about, oh, fifteen minutes, quickly being informed that no food deliveries, trash pickup, or pretty much anyone in the industry would cross the picket lines, before they wisely knuckled under, and quickly called and asked the truckers "What do we need to do to make this problem go away?" Turdoo would be wise to learn that historical lesson. The only question left for him to answer is how humiliating a defeat he wishes to suffer, and for how long, before he reaches a similar conclusion.] 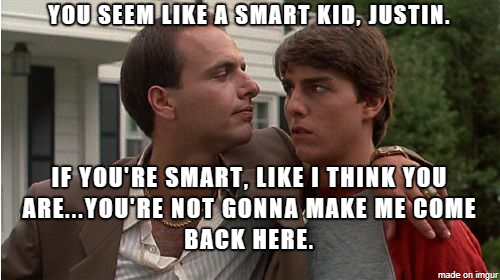 It's about time that citizens around the world unite with each other against the governments that think they control them.
Time to prove again that the people in large numbers have the power

Yessir, Castrudeau the Bastardo Castrato ( or just plain Fidel-Lite if you prefer ) is kaput-ski. So as we await the final outcome up yonder, not ot mention watching NZ, OZ, etc., I have to wonder what Plan B, C, or D might be for GloboHomo and when they will release that Kraken. Which they will most certainly do unlike certain fucktwat lawyers we know.
As always, head on a swivel.
Love your site, always chock full of actual data and deep analysis, as opposed to the 10 angstrom depth found many places elsewhere.

Saw this morning some of those worthless pigs were confiscating firewood now after a judge forced them to return the jerry cans which they supposedly added water to.

Turdo will lie and weasel for a bit longer, but his overwhelming ego will not allow him to come to the table. He's depending as always that the paid for media can turn opinion to his way. It won't work, but he's too self absorbed to realize it.

I'm curious if he takes the Boris Johnson route and backs down, or if he takes the Ahern route and pushes back hard. The problem for him is that the problem can easily pop up anywhere, so if he pushes back he'll be stuck in, at best, and endless game of whack a mole.
Criminals in South America have shot out truck tires to block highways and Rob the resulting traffic jam... It wouldn't be hard for truckers to do this intentionally any one of a million places around the country.
And if this worsens, the truckers with nothing to lose will start getting violent. Imagine the damage that could happen if a truck hit a bridge abutment or was intentionally jammed in a tight place, then set on fire. In the US, tanker trucks catching fire have taken out overpasses - by accident.

My recently passed father was a truck driver all his life. Bet he been laughing his ass off much as I have last couple weeks.
Turdblow and his wef buds worldwide are caught in a tight spot for the first time in their pampered lives. The truckers can afford to wait much longer than they can. If they use force they lose and there will be blood on the streets. They cannot impound and arrest the trucks/drivers.Neither are abundant and both are vital to society. Neither are easy to replace.
And this is about to go worldwide.

I vote to award the truckers the "BFYTW" and until the nukes fly those truckers will be spoken of same as other moments in history that had this dynamic by fathers to their kids.

I, for one, am of the opinion that this aint going away anytime soon and will soon be the final straw breaking the camels assbone of the Great reset. Shit gonna get ugly and Im ready. Fuck it lets go. I hate it for some folks but this society needs a good colon cleansing and those pampared ass wannabe petty tyrant wef fucks need some perspective.

I bet Castro is so ashamed of his bastard son Turdblow he about to come back from hades and take him out himself.

My fingers are crossed that they hold up North. In awe of what they've done so far.

General strikes, the tool of the left, are tough to pull off, because of the needed sense of identity.. The truckers start off with a sense of identity and a strategic hold on the economy. My guess is that the government expected the vaccination to be a show of power and the relatively small number of acute deaths and longer term disability would allow room for their "pets" in the economy. The paper shufflers and the graduates with degrees in ethnic dance obviously didn't realize what they were toying with. If a man is facing the loss of his rig (livelihood) and his home, there isn't much else to do that will not bring on wide-spread desolation. Honk! Honk!

Sadly the people who will likely suffer the most from strikes, shutdowns etc are NOT the people in power. They are evil, not stupid. They've been spending beau coup tax dollars on all manner of contingency plans for decades. And chief among all that planning is insuring THEIR safety and comforts are not compromised. That goes for Canada, Britain and most modern countries. Not just the the USA. Supply chain threats don't affect them nearly as much as most of us.

Bless those sonsabitches. Every last one of them. More strength to their arms, and may they prevail against that softcocked chickenshit effete tyrant.

The first rule of holes: when you find yourself in one, stop digging.

I've read reports that the American version is kicking off this weekend from LA in the vicinity of the Stupid Bowl and headed east. I'm thinking an insurrection will be called by Buydum somewhere west of the Mississippi and blockades set up on the west side of all of the bridges with the convoy stopped there. I don't believe Buydum is going to allow the convoy to reach DC. If it does, 545 .gov officials will be locked up with 700K DC residents in 28 sq miles of territory. Not good odds there.

After 3-4 days of no grocery or fuel deliveries things will get very spicy.

There is no airport inside the beltway and limited port facilities that will keep the groceries and fuel coming IMHO. Even if groceries and fuel are delivered to the port, how are they going to be delivered to end use points? Military, maybe? Duece & a halfs and 400 gal. fuel buffalo's are a poor substitute for 40 foot trailers and 60K gal fuel tankers.

Does anyone really think Pete Buttplug is up to this task?

The 545 could be evac'd by helicopter, but that's admitting de facto defeat.

This is going to be interesting.