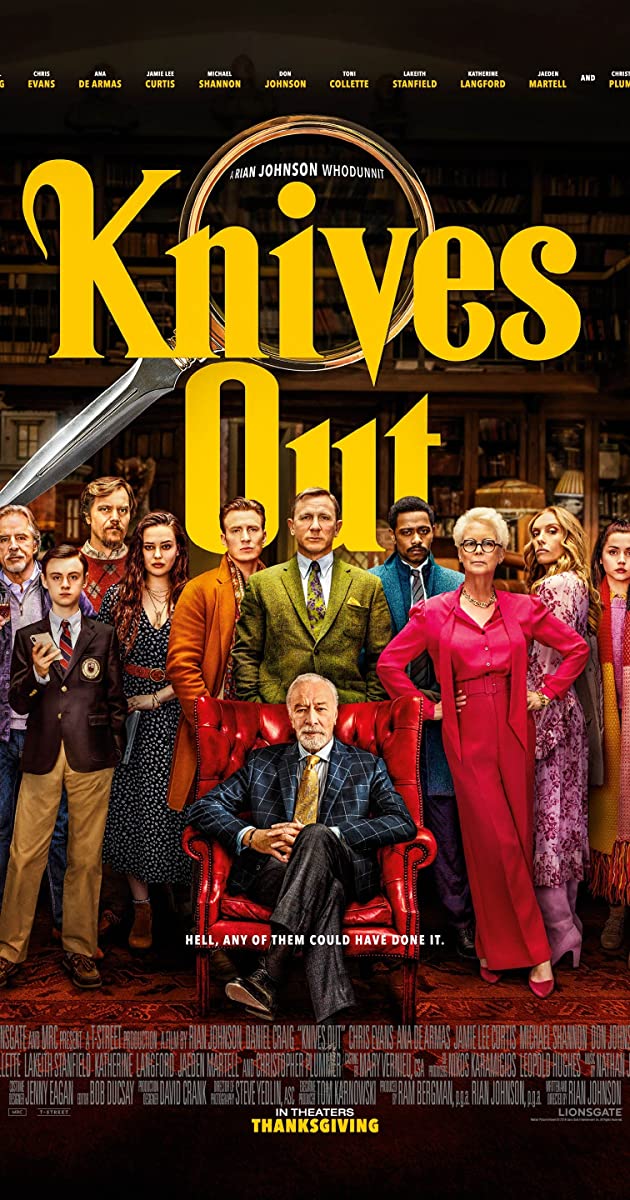 Not paying attention to kneejerk woke-till-they're-broke Hollyweird, coupled with a pandemic, means there's damned little worth a look. For years.

But the cast, and simple curiosity, led me to pick up a copy of this one the other day. It absolutely breaks the drought, but then it's easy to shine with a movie that's just a movie, rather than an agenda.

If you want a great classic whodunnit, a fun cast (including the late Christopher Plummer in one of his final film roles), and with more twists than an Italian coastal road, this flick is yours to enjoy. Daniel Craig pulls off a new sleuth (with a convincing Southern accent, but then the thoroughly English Vivien Leigh in Gone With The Wind sounded more Southern than family trees that don't fork), and the layout and reveal is first-rate.

This one was simply a thumbs-up watch.

No wokism horsecrap whatsoever, no sex, minimal gore, all story, in a pure mystery yarn the equal of anything Agatha Christie ever came up with, and great entertainment.

Hate on the freak show that is modern Hollyweird all you want. But a movie like this deserves your eyeballs. Give it a look.

Watched it my wife much earlier during The Rona and your review is spot on. Also, Netflix has paid gobs of money for the option to make two or three sequels. First sequel starts filming later this year.

"Nothing didactic here!" you say?

Been meaning to check it out. Thanks, Aesop.

For satisfying the sense of humor of my inner-7-yo, I rely on NetFlix's "Alien TV". The mis-adventures of an extraterrestrial TV reporting team of three naïve, innocent Little Green Men covering the oh-so-inscrutable humans and four (or more) ounces of tequila makes my day bearable. YMMV.

I watched this at the start of the plandemic and have rewatched it twice. It is a family friendly flick with a lot of entertainment value. 👍👍

Yes a great and funny movie. The real life house has a history of its own and has been in one or two other movies.

A wonderful movie with a great cast. Not sure if I would say that Daniel Craig had a convincing accent, but he did a fine job here overall.
I have recommended this movie many times. In fact it is on loan to a colleague as we speak.

Thank you for the heads up. My wife and I watched it last nite.
Very entertaining.
Peace, bro.

Agreed. Saw it on Amazon when it got to "free" and was very pleased. Family all enjoyed it.