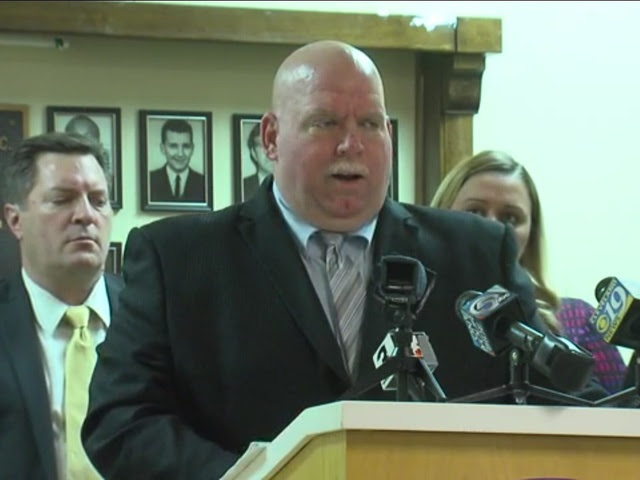 Concurrent with the latest targeted assassination of police officers occurring in Louisiana, Stephen Loomis ( stephenloomis@cppa.org ) - who (purely coincidentally, I'm sure) looks exactly like a giant penis - as head of the Cleveland Police Patrolmen's Association, has come out loud and clear in public against the rule of law, the constitution, and due process:

“We are sending a letter to Gov. Kasich requesting assistance from him. He could very easily do some kind of executive order or something — I don’t care if it’s constitutional or not at this point,” Stephen Loomis, president of Cleveland Police Patrolmen’s Association, told CNN. “They can fight about it after the RNC or they can lift it after the RNC, but I want him to absolutely outlaw open-carry in Cuyahoga County until this RNC is over.”

Loomis also told CNN that law enforcement would be stepping up inspections of anyone who is holstering a weapon in the downtown area.

“We are going to be looking very, very hard at anyone who has an open carry,” he said. “An AR-15, a shotgun, multiple handguns. It’s irresponsible of those folks — especially right now — to be coming downtown with open carry AR’s or anything else. I couldn’t care less if it’s legal or not. We are constitutional law enforcement, we love the Constitution, support it and defend it, but you can’t go into a crowded theater and scream fire. And that’s exactly what they’re doing by bringing those guns down there.”

Ohio allows licensed firearm owners to wear holstered firearms in public except in “secure zone” areas around the RNC Convention site at Quicken Loans Arena. Legal firearm owners can walk around the city within the 1.7 square mile regulated “event zone” with any firearm not banned by the state.

Looking at this dispassionately and conservatively, I'd say that gives the CPPA until about sunup local time tomorrow to both
1) Fire Loomis, for cause
2) Rescind and distance themselves from his dictatorial and unconstitutional remarks.

Anyone who lends any support to Loomis should be investigated and prosecuted with him under federal statutes regarding conspiracy and civil rights, including any "extra scrutiny" of citizens found to be studiously obeying the law and presenting no probable cause for any additional "inspections" of their persons or property in Cleveland during the convention period.

As it is, none of that will happen, so any Cleveland cops who subsequently get killed or injured during the sure-to-follow Activist Follies scheduled to drown out the GOP Convention there can die or suffer while wounded happily, knowing that their blood is on the hands of the president of their own CPPA, the spiritual heir of Reichsfuhrer Himmler, Stalin, Castro, and Pol Pot. In word, if not deed.

Well played, shitbag.
Cleveland's Finest should sleep well, knowing what an unabashed kleine Nazi dictator they've elected to represent their interests. And yet they'll still probably sit there and wonder why everyday people are starting to root for the gunmen...
The rank and file ought to pray that citizens can tell the difference between cops on the beat, and their jackassical mouthpiece.

I just want to know why, O Why? such stacked piles of shit as Loomis never get capped in any one of the far-too-numerous shooting rampages by the Special Snowflakes. If only to leave open the question of the existence of a benevolent deity in the universe, if not pour encourager les autres.

In fairness, at least for his part, Gov. Kasich took about 0.2 seconds to issue a release in response to this idiocy, to the effect that the governor of Ohio is not empowered to arbitrarily suspend US or Ohio state law purely for the convenience of police union goobers with room temperature IQs, or the at-least 51% of their union members who voted them into their position. Which, whatever his other virtues and flaws, puts Kasich above the midline in understanding the Constitution and his official powers, in comparison to the governors of the other 49 states. Or at any rate, smart enough not to openly hoist a swastika flag over Ohio.

I could be wrong though: Loomis may simply be bucking for a job over at the US DOJ or the FBI. Shrillary's going to need a lot of gauleiters if she wins.
Posted by Aesop at 8:20 PM

As an Ohioan, I'm glad to not live there in Cleveland.
Also ponder, I believe that job is "elected".
As in, at least 51% of the officers voted for him.

Well said! It appears stevie loomis either didn't read or more likely was unable to comprehend the lessons the "respect my authoritay" police should have learned as laid out in your Dallas AAR ( excellent and on point by the way ).

As you stated, it's amazing that the PTB continue to spout the expected outrage over the clear and unsurprising blow-back from black folks gunning up the popo. For the "I can shoot you, but you cannot shoot me" PTB and gestapo popo - turn-about is not fair play apparently.

Now with all the latest blow-black, little stevie wants to just ignore that pesky constitution and go all stasi on us serfs. Yeah, I am sure that will make things better in Cleveland.

Bring your marshmallows, it should be quite the party.

I'm surprised the moron mayor of Cleveland didn't come up with this asshattery first-or maybe he did,and the giant penis volunteered to be to be the one with the idea-probably was promised the job of being the dickhead in charge of the mayor's personal security detail.
Cleveland has been run by corrupt democrats for as long as I remember-in fact,there's a bunch of 'em doing time in club fed for corruption now.
I'm guessing the giant penis was "elected" by the mayor and his cabal of corrupt democrats,because they said they wanted him to be the head dickhead in charge,and the regular cops votes didn't count unless they voted for giant penis.
Kasich making an intelligent decision is surprising,but it falls under the even a blind squirrel can find a nut once in a while dept.
I could be downtown in 20 minutes-but I have no intention of going anywhere near downtown this week.
I can watch the rioting and looting on the tee-vee,and listen to CPD radio traffic on the scanner-or even use Broadcastify to listen.
CPD bough a bunch of new riot gear" including collapsible batons-I'm sure they're eager to "test them out" by busting a few heads.
A lot of Cleveland cops bust people's heads regularly-those cops are dickheads to begin -they'll only get worse as the week goes on.

I often remark that the more someone of an imbecilic bent speaks, the more they tend to tell on themself:

A minor point (I understand you were quoting a media source, so accuracy was never a prime objective), but in Ohio, you do not need a license to Open Carry. Anyone not prohibited by law from owning a firearm can carry in the open. You only need a license to carry concealed. Oh, and your AR-15/hunting rifle/shotgun or whatever favorite flavor of long gun does not need to be "holstered".

But most J-School types heads would explode at the concept that in large parts of this country you don't need government permission to either own or openly carry a firearm.

@Mike Bishop
Actually, he's right in regards to those comments, Mike. (cf. blind squirrels and acorns.)
What Daily Kos gets about normative policing could be inscribed inside an ant's helmet with a Fat Sharpie.

Noted.
The greater point was that when even Daily Caller and CNN notes that someone's gone all JBT, directly quoting comments about willfully ignoring the law and constitution, the number of cleat-marks in his wedding tackle have to be beyond counting.