A Few Words On Caching

(First, a Grammar Nazi note: cache is pronounced "CASH", not "CASHAY".
Models and brands have cachet. Preppers have a cache. If you're making YouTube videos, learn your mother tongue, even when we steal words from other languages, so you won't sound like a dolt.)

Beyond that, a cache is a good idea. You shouldn't depend on all your goodies not getting found, confiscated, or ever needing replacing, and you never know when you'll need to rely on the Bank Of Foresight to make a withdrawal that might very well save your life.

Having noted that a spare or three is a good idea, while you might have just provided yourself the bare essentials, as in the pic above, better still is a cluster of such.

Once you pick your spot, do what surveyors do: make yourself a benchmark:

Except not this obvious.
The above is for a surveyor to put a transit on. If you look around in town, or hike the backcountry, you can - or may have already - find them out in the deepest wilderness.
But unlike surveyors, you don't want yours to stand out quite as obvious. A better one might be a prominent stone, or cairn of smaller ones:

Or perhaps something a bit more subtle: 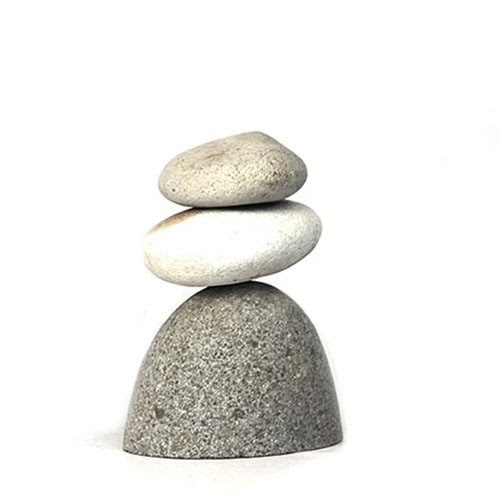 In any event, think about perhaps doing several of them, perhaps four, at cardinal points, N, S, E, W.
A length of paracord strung between them would give you a center point. Then, instead of doing your one buried cache tube at the center, think about doing a cluster, a given distance from center, and at 4, 6, 8, or even 12 points from that spot. If you wanted to go crazy, you could do concentric rings of those as well.

Anyone who digs at the center of your markers finds nothing.
And the others are separated as well, and give you the option of not digging everything up if you only need one or two things.
Suppose you put food in one, water and filter items in another, knives and tools in a third, firearm or ammo in another, medical supplies, etc. etc. ad infinitum.
Now, you can make each tube or container smaller, and the loss or compromise of any one is less serious.
You could even send someone to retrieve one item, without letting them know about the entire cluster, for OPSEC. Imagine the possibilities for you or others retrieving weapons, ammo, or other sensitive items that have become either highly prized, or malum prohibitum items under a repressive regime.

Or you could have the ability to re-equip multiple persons from the same cache, at different times or the same one, or do so yourself. Only one person - you - need ever know the full extent of what you've squirreled away.

Again, anything worth caching, is worth caching more than once.
If you do multiple clusters, put the same items in the same positions, so you don't have to wonder which way you did it each place.

If you want to be doubly tricky, offset your center from the actual cairn center. For instance, the cairns mark a point, but the actual hub you chose is twenty yards (or whatever distance/unit) in another direction, and all subsequent directions are from that point.

Your stash should be buried deep enough to escape casual detection or ordinary weathering, but putting some bright nylon rope in an "X" on top of it before burial will assist you in zeroing in on it when you're digging it up.

For the comprehensive and definitive manual on all the considerations, the appropriate
ST 31-205 Special Forces Caching Techniques should already be in your digital library.

Secondly, survival takes many forms.
Having a duplicate copy of your ID, records, cash, etc. somewhere else also counts.
So does having spare/alternate clothes and other items if you're travelling abroad.
Something like that tossed up above a drop ceiling counts, and might mean the difference in getting out of another city or country if things there go bad.

And if your primary residence or frequent work location isn't your intended retreat, something as simple as a few cans of preserved fuel, some cash, and other goodies in a closet storage unit halfway between work and home or home and retreat, or both, could mean the difference between getting to safety, or not.
Depending on what you put in it, you might even consider picking a spot of underbrush in a planter in a mall or restaurant parking lot, next to a parking structure, or something similar to hide a PVC burial pipe inside. You risk losing it if it's found or plowed over, but for sites that aren't likely to be disturbed for decades, it's a thought.
Posted by Aesop at 11:39 AM

A suggestion I read about was to put a decent magnet just inside the lid(s) so you can find it easier. Another suggestion was to dig deeply enough so you can have, say, a bucket of food, then a foot or so of dirt before the cached firearm can be reached.

I wouldn't know anything about it personally, of course. All my firearms were lost in a freak canoeing accident.

I'm a lousy prepper. But if I were to bury multiple caches in the same general area, I wouldn't split them up between e.g. one for food, one for tools, one for firearms, one for ammo, one for medical supplies.

IMHO you are better off putting them in order: have one cache with all your survival basics. A little bit of food, water, a multitool, a compass, paracord, a small first aid kit, etc. in the "first" one.

In the "second" one, have more "advanced" stuff: a little more food, water, a camp stove, a small pistol and some ammo. Include a larger first aid kit.

And so on and so forth. IMHO this gives a couple of advantages: Each kit is a self-contained survival package. Don't have time to dig up three of them? Dig up one and have a little of everything. It also insulates against compromise. If one cache has all of your food and someone makes off with it, then you have no food. If you've spread your bets, then they can't leave you foodless (or waterless or med kit-less or self-defense tool-less, etc.) unless they find and remove every single cache in the area.

Obviously not all caches can be equally weighted to a universal survival kit, but every cache can have a bottle of water, a can of pork & beans, a multi-tool, some band aids and a few tabs of ibuprofen.

That's some good advice.
One thing I do differently is I stay away from making cairns,even small ones because animals can knock them over,and people sometimes know what the pile of stones could mean,and will search the areas.
I use things like big boulders that are too big to be moved without heavy equipment,rock outcroppings,really big trees that would survive forest fires,and leave really big stumps on the off chance the area gets logged,places where two or more streams come together,the piles of rocks found along most ag field edges,rockslides,the intersection of two old logging roads,etc.
These locations can be easily marked on a topo map,or explained to others who are familiar with the area.
As an example-on a local public hunting area,there's remains of an old stone building that's in an out of the way part of the hunting area-few people go there,yet it is easy to find.

There's old oil wells all over NE Ohio-those are great land marks-"go east from old oil well until you are at the base of the big beech tree,go north until you hit the old logging road,go west until you hit rocks covering steel culvert under logging road,cache is under the scrap pieces of culvert to the south."
I'm always thinking of cache locations as I'm hiking through the woods hunting.
Also when I'm hiking in the national park that's 55 sq miles of mostly woods behind my house.
Hiking is a great way to find good cache spots-just be sure you see what the place looks like in both summer and winter-things look a whole lot different when there's leaves on the trees in summer than they did in winter when there were no leaves on the trees,and no green undergrowth.


"Models and brands have cachet. Preppers have a cache. If you're making YouTube videos, learn your mother tongue, even when we steal words from other languages, so you won't sound like a dolt.)"


There's no shortage of "experts" who do make themselves sound like dolts in You Tube videos.
Try teaching culinary arts classes-the mispronunciation of words /phrases like roux,bain marie,mise en place,Escoffier,sauteuse,garde manger, etc. is at times hilarious,and at other times,it makes me think we have produced at least a generation of uneducated morons,with a second generation well on the way to being even worse.

this is a good idea but keep i mind if authorities get involved, like last year when some kids found a cache and reported it, they cordoned and searched the entire area finding 4 more caches in the area. all his preps gone. had some good stuff too, boomy stuff.

Which says more about the peril of choosing a lousy place to cache things, and leaving it where kids could discover it, than it does about anything else.
If random kids "discovered" your stuff in the first place, anything that follows is entirely your own fault.

would agree except it was in the middle of a national forest, off trail.no idea how they found it. another reason i still haven't placed mine yet. know i need them, just don't know where to put them safely. even my back acreage can be seen and any number of hunters cross it. storage units get routinely broken into.

Similar to what Tweell said, do something like Rommel when he decided to unass Egypt.
He buried scrap metal at regular intervals until the pursuing British Army got tired of digging up junk, and then he buried a mine.
Bury a bunch of scrap metal, and below that a couple of feet bury the cache.

Riverrider, if it's like the cache found 25 years ago on State Park land in the Northwest part of the State, it may not have been discovered by kids, but was revealed as the result of a falling out between preppers, one of whom, it is believed, ratted on the other.