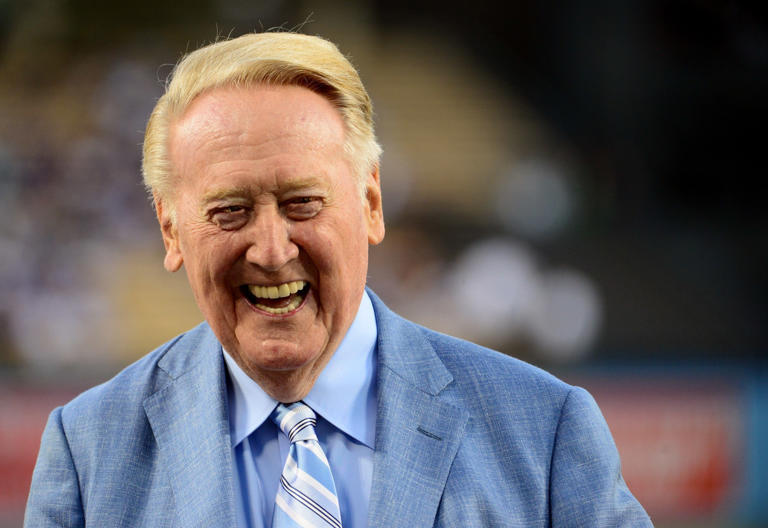 Legendary sports announcer, and voice of the Dodgers for a record-setting 67 years, Vincent Edward "Vin" Scully, 94, peacefully at his home in suburban Los Angeles.

I grew up listening to Vin. Summer hasn't been the same since that awful day when he hung it up in 2016 and left the broadcast booth. I've heard a lot of sports announcers over the years. Blessed to have come of age with Dick Enberg doing L.A. football, Chick Hearn doing the Lakers, and Vin for the Dodgers. Now, all gone.

Scully wasn't just the best of those three legends, he was the best of all time, and I do not say so lightly, nor merely out of home team pride. He did everything for everyone, and did it well, but it was baseball he loved above all, and baseball he made richer for calling the play-by-play. Not just for the Dodgers, but for every player and team he ever watched.

You couldn't watch a home game at Dodger stadium for most of my lifetime without hearing him on 40,000 radios from home plate to the bleachers. He was that good. If you went to a game, you took a radio to listen to Vin, because he was going to tell you more about what you were looking at firsthand than any five other guys, if you gave them a week to rehearse.

And he had what became a legend most: humility. He was the last guy who'd ever toot his own horn, or act too big for his britches. And he never had to. He was just that good.

Any late spring to late summer night, after sunset and before dusk, the summer heat fading away, and his voice was the soundtrack to life, a lullaby while lounging in a backyard hammock as the night sky deepened from indigo to starlit black, and an under-appreciated feast for the ears, anywhere from the pre-game show to the post-game wrap-up.

With a golden voice now stilled forever, and living on only in recordings. And about a hundred million memories, from the players and fans whose games he called, and whose lives he touched.

He called Sandy Koufax's perfect game. He called Hank Aaron's 715th homer. And he called this golden baseball moment, one for the ages. Listen to it, and watch, as I did as it happened, and imagine hearing this for up to 162 games for 67 years:

Imagine being so good you could shut up for over a minute
on live TV after one of the greatest moments in sports history,
and just let the microphone tell the story.
You don't have to imagine it. Vin just did it.

Scully was the best. Thanks for the video, it reminds me of better times.

That clip brought back memories. I watched that live. Thanks. RIP Vince.

And they say only the good die young. Man we have lost many greats from all walks of life these last two years. I think they all knew what we know and are avoiding the upcoming festivities.

ps You notice who was on first base, another cheater.

RIP Vin Scully who is now with Kirk's manager talking baseball. Wish I was there.

One of my very first memories was Vin's voice over the radio at my grandpa's house in San Bernardino in about 1960 or so. As you say, the absolute best. He even briefly made golf interesting.

It sure got dusty in here, dang my eyes are watering... for a helluva lot of warm days and evenings, Vin Scully was a big part of my life's soundtrack. We were so blessed and really couldn't see it at the time, but Vin, Chick, and Dick Enberg were gems... Aesop, thank you for your eloquent tribute to not only "the Voice of the Dodgers"; but a fine gentleman. Every baseball fan, for whatever team, mourns this loss.
Thank you again brother, that video clip made this grumpy ol' bastard's day.
Original Grandpa

He sure spoiled you for anyone else.

I was watching myself that amazing night, despite being a diehard (and long-suffering) Braves fan my whole life and not caring much who would win between the two California teams. I had to stay up way late to watch, and I'll never, ever forget it. It's been many years since I paid any attention at all to baseball, having abandoned the game in dismay and disgust the year they went on strike; it's sad, really. We'll never see Scully's like again...probably not Kirk Gibson's either, alas.

The LA I will always be in love with. Few drunks, fewer druggies, and very little of the homeless. Just incredible summer evenings, the beaches, and magic happening every single day. God blessed every one of us when he gave Vin that voice.

I remember Gibson doing in my 88 Mets in game 4 of the NLCS with a Homer in the bottom of the 12th. It was the year of Dodger Blue.

Great video capture - I agree on Vin - but would add Red Barber who I listened to growing up & was later re acquainted with when he and Bob Edwards spent 'Friday With Red' on npr 40 years ago when it had some semblance of being "All Things Considered' (not today's full retard commie network). Thanks again.

Didn't grow up in Cali so didn't hear VS much, but always seemed like a first class guy, and a good baseball guy.
Nice to listen to, given the opportunity.
Always thought of VS and our own local guy, Jack Buck as 2 of the GOATs of baseball.

The one thing I always remember about Scully was when he worked the one man booth. That was where he developed the 'silence' and letting the crowd noise build the tension. May he rest in peace.

Thank you for remembering him....being a Michigander, only heard him on Saturday...he did announcing with Joe Garagioli...what a great guy.

I grew up listening to him (often along with Jerry Doggett) calling games on the radio, at home in Van Nuys when it was a different country. Since they came to town and I remember them playing in the Coliseum even before the fixed left field (because it was a soft pitching wedge for awhile to hit a HR). Even the perfect game, and it took awhile before I realized that something really special was happening.

Left forever in '69 (thanks Uncle Sam) and have settled where I've heard a boatload of games called by Harry Caray. But Mr. Scully was the best. The. Best.
RIP and Hand Salute