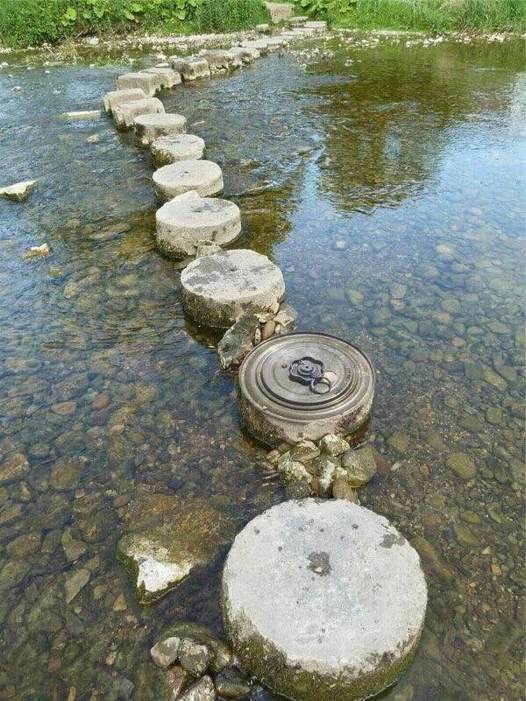 Normally, we pay no attention whatsoever to the rantings of the Great Canuckistani Buffoon, nor would piss in his direction even if he were on fire (which we suspect is a daily occurrence), let alone provide him a boost in link-looks, but every once in awhile, as noted by an astute commenter today, he ties his own shoes together at the edge of the cliff, then goes for a walk a la Wile E. Coyote, and we are compelled to share.

Glenn's stepped all over his dick on multiple blogs and topics, and served himself his own ass on a platter on multiple occasions on Peter's blog, after telling all and sundry he was the World's Foremost Expert on drones, and repeatedly goofsplaining to one and all that using small consumer-level drones to deliver worthwhile payloads was unpossible. And then doubled down each time real-world events showed how poorly his expert commentary aged. (The 200 YouTube videos coming out of Ukraine this year alone showing just the opposite would have kept a lesser fool in check for years, but Glenn fearlessly takes Dunning-Kruger to heights even the authors of the theory couldn't possibly have imagined.)

Still trying to claw his way to relevance, let alone victory, by guttersniping at moi, we have today's latest Glennish oeuf (or should that be Oof?), wherein he set his bumbling hand to posting the above pic, and ham-fistedly suggesting that it would be a pitfall we couldn't resist triggering.

Pay attention, kids: this is what happens when your ego outmatches your knowledge-base by a country mile, but you go ahead anyways.

The mine in the picture is a Russian TM-46 anti-tank mine.

As Mssr. Filthie's only discernible military service was probably as a waitress at Hooters at the local base, or as a camp follower in the comfort brigade, he's missing a few key bits of intel. If he ever threw a grenade at the enemy, 200:1, the enemy would pull the pin out, and throw it back. (As we'll demonstrate presently.)

Anti-tank mines, like the TM-46, typically require more force than anti-personnel mines do in order to set them off. Quite a bit more, in fact, precisely to prevent wasting 12 pounds of HE on a human target that could adequately be serviced by a pound or so. The TM-46 is no exception. It requires a pressure on its fuse trigger of between 120-450 kilograms. Never having landed on the moon, and thus well acquainted with the metric system, all good Canucks know that's the equivalent of between 264 and 990 pounds of pressure. The wide degree in slop on that weight range is doubtless due to Russian quality engineering. [Hint, Glenn: you could look it up.]

I (nor almost anyone else) couldn't manage to set that mine off unless I jumped on it from atop a ladder. It's probably more of a threat to bloviating and bloated ignorant fatasses, but never having seen Glenn myself, who can say if he qualifies? At any rate, one seldom brings a ladder along to cross a steppingstone bridge.

Even with a ladder, and even if carrying Glenn's fat ass and monumental ego on my back when I did it, I still wouldn't have any problems negotiating what Glenn thinks is a hazard. Because in his haste to poke fun by pulling random shit off the internet, Glenn didn't notice that the arming safety pin is still installed on the mine in his picture. I could drive over that thing in a T-72 tank without any risk of setting it off.

[Second Hint, Glenn: you could've looked that up too.]

So we see what happens when Glenn tries to make himself look smart by making fun of other people, because he could only afford a half-ration of wit, and bought his training aids from the Acme Joke Company.

Thanks for posting something far more uproariously funny, especially to me, than you intended, Glenn, though not quite in the way you intended. I'm sure your little gag will get a lot of looks today too, but it isn't going to work out for you exactly the way you planned.

But trust me on this: Go full-boat on the necessary bandages, and be gentle with yourself when you're pulling your cleats out of your own wedding tackle. At least you managed to blow your own attempt at comedy up - in your own face.

And thanks for being you, in glorious full Internet technicolor glory, and continuing to live up to all my expectations, before most people even get out of bed in the morning. If I think about you at all this year, it'll be because I'm laughing at the thought of you. Seriously, though: Why not skip coming at me from lack of imagination (rent-free, man, rent-free), and instead try writing on a topic - perhaps even something you know something about - without embarrassing yourself? If only for the sheer novelty. In return, I can go back to ignoring you...pretty much non-stop, forever. Such a deal, eh!

Full props, man: If that Washington Generals coaching job ever opens up, you're a shoe-in. Stay classy.

I see.
So if I call you a moron, again and again, how funny is that?
Show your work.

Glenn is a joke, David.

The twin requirements of comedy are truth, and cleverness.
He went 0-2 there.

He meant to be a wiseass at my expense, and stepped on his own boobytrap. That's both poetic, and comedy gold, and he intended none of that.

How many times do you have to take Glen down before he gets the message that trying to match wits with you is like being a one legged man in an ass kicking contest? This must make #3 or #4 if memory serves.

He thinks he's winning.
It's like kicking the retarded kid who's so retarded he doesn't know he's retarded.

Well, he gave me a chuckle this morning. I'd say he's winning this one. Again.

Clearly, you're easily amused.
If you think making you laugh is the criteria for victory, then I'd say you're as big a moron as he is, which gives me a chuckle too.
See how easy that game is?
Now I'm winning.
Again.

Now scuttle back under your bridge.

Glenn is truly tho most self unaware blowhard on the internet. He is so stupid that he doesn't realize that he is stupid.

I've no dog in this fight. But I would speculate that someone touched a nerve... LOL.

There was less smoke and fewer embers after the Great Raid on Tokyo than after your response, Aesop.

Eh, he's a Cannuk, give it six months and he'll stub his toe then they'll rail road him into assisted suicide.

Nope. That was a casual swat at an ass-biting flea.
It was not "a touched nerve".
But he keeps doing it because stupid, so I have to get his attention first.

If he'd just fuck off and mind his own business, I'd give him about as much attention as I do to MSNBC.
But fucktards gonna fucktard, and he insists on pushing the envelope.

Well, I for one love watching you two duke it out... makes for a good bleggfight... And yeah, -I- might be able (sans pin of course) accidentally set that mine off, especially if I'm toting the Ma Deuce, and a 50 round belt but then again, all the stress has me below 310 for the first time in 12 years...

Appreciate you for keep on keepin' on for my lil 'un. Been in some -seriously- bad spots in the past few days mentally... I fluctuate from "Kill them. Kill. Them. ALL!" to crying over stupid shit like finding her lil baby rabbit dolly that she loves in the laundry...

Being helpless is possibly the worst thing I've ever had to go through...

I get it.
We all have those times. They purely suck.
The hardest thing for any man is feeling helpless.
Stick with it, man. Stand there and take the body blows. She's worth it.
Nobody likes sitting in a dugout and getting shelled, either.
You don't have to like it, you just have to do it.
Wait it out. It's not forever, just a season of the soul.
You'll come out the other side okay. But like a car accident, right now you're just along for the ride.
And if there's something else productive you can channel all that rage-energy into, it's a better way to handle it, and you might get amazing things done.

Sir, God bless you. I pray you, BCE, have the strength to stay the course, Buddha like, until she is safe, again.

Sometimes, the hardest thing to do, is to do nothing.

And, as my parochial school upbringing so very long ago taught me, the temptation is distinct from the sin.