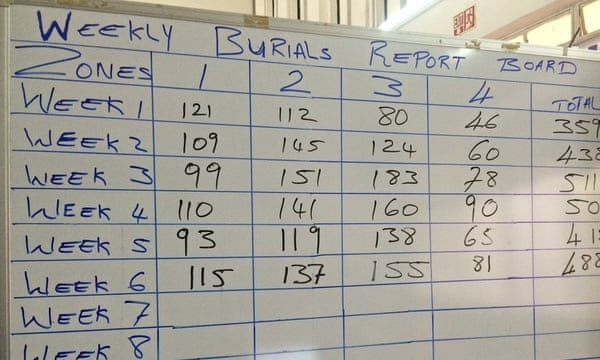 FREETOWN (UK Guardian) - They send in surveillance officers to investigate homes where there have been deaths. They don’t get too close. “They do a clinical assessment from afar,” says Parkinson. It’s all run with military precision by the Sierra Leonean army. Grim scorecards on whiteboards are positioned around the room – the cases, the treatment beds available and the bodies.
“For the last five weeks we have buried every body reported to us the same day,” says Parkinson. “But yesterday we left 43 bodies because the burial teams had not been paid.”
It keeps happening. Sometimes it’s the burial teams, sometimes the nurses and sometimes the ambulance workers. All are supposed to get extra danger money. Nobody seems to know whether the government can’t pay, won’t pay or is just bureaucratically bogged down. Whichever, it causes deadly delays. Two weeks ago, burial teams dumped highly infectious bodies – local people claimed as many as 15 – in the street outside a hospital gate in Kenema in the east of the country to make their point.


Nota bene that from Oct 24 - present, Sierra Leone has reported less than 600 Ebola victim deaths to WHO, as reflected in their stats column on the bottom of this Wikipedia page .
But as this snapshot from Sarah Boseley, author of the diary linked here recorded, Sierra Leone's Ebola crisis center recorded over 2600 burials by their own burial team members during this exact same time frame.
And, the story goes on to note, people are reportedly wandering off into the jungle to die, which persons aren't reflected in the burial numbers anywhere.


"People are afraid to report their numbers to the government. They are afraid to call the helpline. They are afraid they will be taken away to treatment centres and never see their families again. There are reports of people disappearing into the forest because they’d rather die with their family than be taken into a treatment site.”“It is a puzzle. We don’t know what it is. It is not a low death rate. It is probably the labs aren’t able to get swabs for all the dead bodies,” he says. That means they can’t be sure Ebola was the cause of death.
And there are many hidden deaths. “We have evidence that less than two-thirds of burials are being reported,” he said.

So they don't test the dead bodies, they simply cart them away post haste and shovel them under, same day.

Neither approach will do anything about Ebola, except insure it continues to spread in wider and wider circles.

So those 600-odd deaths? We have photographic evidence that the number of reported burials are 5-6X that many, and half as many again aren't being reported at all.

If we change Sierra Leone's death report numbers in accordance with that knowledge, we get an additional 4000 dead people, which brings their numbers much closer to reality as observed elsewhere. Then factor in the number of people who just wander out and die in the jungle (which ensures that the virus reservoir in the wild will be well-stocked for decades once various critters tear into the corpses).

And the lying m******f*****s sitting in those centers, their Western accomplices, and the morons in the media stand right in front of the tally boards they know to be lies, and just stare at them like deer in headlights, and can't seem to figure out what's going on.

Hey, if I'm about to kick it, I don't feel the need to "report" to my local jackboot. Fuck them. And since I'll be DEAD, I don't care what I leave behind, especially since I "believe" it's due to a voodoo curse or whatever.

In these pdf reports which come out almost daily from Sierra Leone they have charts by district of number of bodies and how many tested positive and negative for Ebola. Runs 10 to 20 % positive for the country but much higher in some districts.

I'd wondered where the information in the reports came from now I know it must be the army.

I just paste the address into notepad and then change the number to grab earlier reports. the latest is 195, the link is to 194.

Still doesn't mean they are testing everyone who dies. They are however providing more information than either of the two other countries are.

GIGO however is a ruling principle for any modeling of this or any other event.

Aesop, given what you know of the virus' transmissibility, who likely is the following scenario:

1) A man (must be male) becomes infected, goes into the forest to die, but is one of the lucky few who beats the disease (males are statistically somewhat more likely to beat Ebola).

2) After a few weeks or a month of eating berries and bush meat, he comes out feeling much better, and decides to take a trail over a border into a neighboring country which hasn't all gone to shit. (He evades borders checkpoints not out of any deliberate mendacity, but because soldiers tend to confiscate property and demand bribes.)

3) Our poor fellow has been a long time without female company, so it's time to parlay with a lady of the evening.

4) Ebola, simmering dormant in his semen, finds a new host....

-- Now, a lot of "ifs" have to happen there, but as a pure function of time amidst an increasing case-load, I would think that, as long as the chances are more than infinitesimal, that it happening exactly that way will approach inevitability as some point.

Amending last, the man could even go through a checkpoint legally and not trigger a properly-administered test for Ebola while being screened. His body would be free of it, with the virus only holding out in his sack.

If he's already a malaria-sufferer and used to recurrent bouts, it may not have occurred to him than he'd come down with a different bug.

Meanwhile, the Castro regime's propaganda contribution stands around uselessly because their level of expertise (hint: zilch) is about exactly what the smarter among us knew it would be.

No fever, no quarantine is the rule there (thanks clueless pseudo-quarantines by Western nations), so they could cross a border, get their ashes hauled, and start new clusters in Ivory Coast, Mali, Guinea-Bissau, etc.

It's likely already happened, since it was noted way back in September that soldiers were taking bribes to let people in and out of quarantine areas, because that's how checkpoints roll in Africa and most of the world.

And in Mali, for one example, the de facto assumption unless you're puking your bloody guts out, is that any death isn't Ebola.

Eventually, they'll all run out of luck, and further spread is inevitable.

Thx for the pdf link geoffb, but the number of confirmed cases (1700+ year to date) shows the exact point:
the one photo above of a six week sample documented nearly 2700 burials alone in the last 6 weeks.

So they're not testing anyone who dies, therefore they'll never be confirmed Ebola cases, nor even listed as suspected. But the extra 4-5K bodies confirms what happened to all the other Ebola-infected who didn't translate across to the death column: they died untested, ad simply disappeared from the running tally.

How convenient.
Esp. for the government of Sierra Leone. Particularly because once the virus is "gone", sanctions are lifted, and their economy goes back to work.
(For the citizens, not so much.)

Inevitably this will blow up in everyones' faces. And WHO/UN/CDC leadership will all sit and stare, transfixed, and wonder aloud "How can this be? We solved Ebola...?! It says so right here on our press release..."

(The first half of that is a great read.)

They are several page pdfs.

Like others here, I am most frustrated about media censorship – and self-censorship.

There is lots of grist for the media mill; after all, if it bleeds, it leads…right? For example:

• This study documents 300 mutations in the current ebola genome. The consequences are unknown, but the implication is ominous, considering that the influenza virus mutates so rapidly that researchers must come up with a new vaccine every year.

• Funeral practices are strongly implicated in the spread of ebola. To carry out a funeral properly, the corpse has to be washed, minimum 3 times.  Men wash men’s bodies and women wash women’s bodies.  The women will include the deceased woman’s sisters, and this risks spreading the virus to other lineages and other villages.
Where the man is dead, the wife has to have her head shaved and be covered with mud formed from the washing of the husband’s corpse.  This frees her from the attentions of the dead husband’s jealous spirit, and prepares her to be remarried to one of his brothers, or to return to her own family.
Funerals are where families meet and reassert their land rights, the basic resource for survival in a peasant agrarian economy. Without funerals, access to farm land is at risk.  This explains the tenacity with which villagers defend funeral practices, even when legislation forbids unauthorized funerals.

This and other topics are covered in this dry, but fascinating academic paper.

• Various teams have been deployed throughout the countryside to help, and some of these have been attacked and even stoned.

• Samples headed to labs have been stolen by ambushes and hijacks along the roads.

• Monrovia, a coastal capital, gave up on quarantines, because people were simply swimming out.

These things out there for the media to amplify, but you have to HUNT to find them. Why don't they want to bring these dangers to the attention of the public? Why are these findings not used to caution and educate people all around the world? Who is suppressing these optics, and why?

I want to be informed, not pacified.

Oh, and that study I linked to above, the one about the genome mutations? Take a look at the list of authors. Several of those brave people, the best minds we had, the real experts in the field, are dead now. Of ebola.

The dangers of this thing are staggering. The media is all, crickets.

Thanks again to Aesop and others here for curating some real news and analysis.