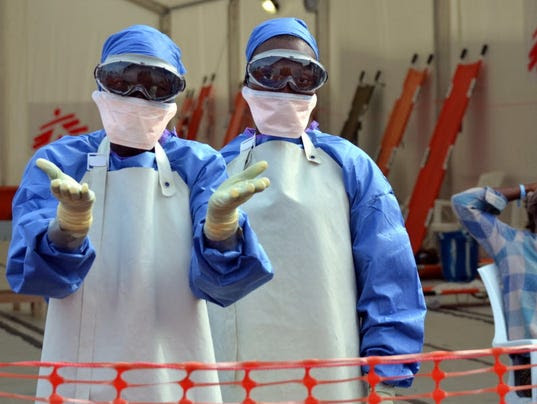 (NYTimes) KERRY TOWN, Sierra Leone — On a freshly cleared hillside outside the capital, where the trees have been chopped down and replaced with acres of smooth gravel, the new Ebola treatment center seems to have everything. There are racks of clean pink scrubs and white latex boots, bathrooms that smell like Ajax, solar-powered lights, a pharmacy tent, even a thatch-roofed hut to relax in.
But one piece is missing: staff. The facility opened recently with a skeleton crew. Now, in an especially hard-hit area where people are dying every day because they cannot get into an Ebola clinic, 60 of the 80 beds at the Kerry Town Ebola clinic are not being used.
It is like this with a lot here: good intentions, bad planning. Aid officials in Sierra Leone say poor coordination among aid groups, government mismanagement and some glaring inefficiencies are costing countless lives.
Ambulances, for example, are being used to ferry blood samples, sometimes just one test tube at a time, while many patients die at home after waiting days for an ambulance to come.
Half of the patients in some front-line Ebola clinics do not even have Ebola, but their test results take so long that they end up lingering for days, taking beds from people whose lives hang in the balance and greatly increasing their own chances of catching the virus in such close quarters.
Even after patients recover, many treatment centers delay releasing them for more than a week until there are enough other survivors, sometimes dozens, to hold one huge goodbye ceremony for everyone — again, keeping desperately needed beds occupied. “I just wanted to get home and see my wife,” said Suliman Wafta, a recent Ebola survivor treated nearby. “But I had to wait eight extra days.”
The latest Ebola numbers are ominous. This past week, Sierra Leone reported almost 100 new cases in a single day, nearly double the number just 10 days before — and those are only the confirmed cases, which health experts say may be a third of the total. At this rate, the swelling roster of the gravely ill will far outstrip even the most optimistic projections for new hospital beds.
Many aid officials in Sierra Leone said they crave a more effective command structure. The government runs a national emergency center, but aid officials said that with scores of foreign experts, government delegations and private charities flocking here, coordination was still messy, with many gaps and overlaps. It is extremely difficult, they said, to get even the most basic information, including how many treatment centers exist.
There are also growing questions about corruption, with the government announcing recently that it had found 6,000 “ghost medical workers” on its payroll, even as real Ebola burial teams and front-line health officers say they have not been paid in weeks.


Nice to know that with thousands dying there, no one is in actually in charge, the government is still massively corrupt, the former colonial power is still inept, and the legacy of their hapless former charges continues to exacerbate the crisis and prolong it beyond any explanation other than widespread massive stupidity of biblical proportions.

In short, because this is Africa we're talking about. But don't worry, whipping Ebola there is the key to not seeing it here, which is apparently one reason why Klown Klain is bailing out totally by March 1st,  just about the time things there should totally go to hell. Nice work, Klowny.
Posted by Aesop at 6:49 AM

Gotta love how the article mentions "During his short tenure as Ebola czar, Klain was widely criticized for not being visible during the peak of the outbreak."... like the outbreak is over.

We haven't seen any more cases in this country because of media collusion, and blind luck. It's like the chairman of the local sandbagging committee calling it quits because it stopped raining, and the water is clearly within the banks here... despite being well beyond flood stage just upstream.

Interesting to me that they are now openly saying that they are undercounting by a third. It took a little longer than their other progressions.

"It can never get here"

"When it gets here we can handle it"

"We always new there could be infections."

"We expect to see more deaths."

It took only a few weeks for that progression.

This one took a little longer. I wonder how much longer until the end point of "we no longer have enough people on the ground to provide an accurate accounting of the dead and infected, but we expect 80% of the country to be dead within 21 days."


BTW, Aesop, can you provide an internal link back to the growth chart that had predicted infection with dates? I wanted to check where we were vs a month ago, but couldn't find the chart I remembered. Maybe I mis-remembered?

If we are really at 50k that seems like we are a little ahead of what I remember- which was 40k at the end of Thanksgiving. And I remember the chart using published numbers not "corrected" numbers.

Might be time to revisit the predictive power of the curve...

This is the only place I have seen that seems to be following the ebola fiasco on an ongoing basis. Thank you again, Aesop.

I would love to see a current chart too. The Telegraph published one back in September that estimated (based on cases essentially doubling every month) 1,400,000 cases by January 2015:

I also want to say thank you for your time and energy on this. I greatly appreciate it.

In the previous thread mike18xx posted a link to a page. They in turn link to a paper about what model should be used to chart the reported cases and how that model will have serious effects on what is predicted.

They argue for using a "logistic growth equation" instead of an "exponential model." This paper was done on Nov. 20th and the data is from then. Leaving aside the accuracy of the data to begin with, what these three countries seem to be going through is phases of exponential growth of cases followed by logistic growth which at anytime can return to exponential.

Sierra Leone is now back to exponential as their graphs at the logistic level do not now fit and once again the exponential one does.

National numbers are of course a smoothed form of the more local numbers like districts, villages, and families. Like the S&P 500 compared to individual industries and individual stocks.

Any idea what the cost of setting up a lab to test blood sample would be?
Seems to me that with all the aid $$$ being sent to W. Africa,someone would get the idea to set up a lab,or even a few labs that are closer to where the highest number if cases are found.

If local labs could be set up,it would speed up test results,and maybe help slow down the spread of the virus just a bit.

1) Not being a lab tech, I have no actual idea what a proper lab set-up would run. The biggest issue there is finding people literate enough to train in order to operate the facility.
This is why the Kerry Town Ebola facility the UK built in Sierra Leone is only operating at 25% of capacity: they can't find 100 locals smart enough to train to do the jobs.

2) When TPTB have to be dragged kicking and screaming to admitting the obvious, they ARE the problem, not any solution to it.

3) Here's a link to my envelope-math from back in August:
I ball-parked it at 50K or so now.
If we assume the official numbers are 33% of reality, it's still spot-on. At one point, we were going to get there explicitly without the fudge factor, but in the last 6 weeks, those governments have cracked down on any serious accounting or reporting or reality, and the numbers, as I've noted repeatedly, are now all pure septic chunks.

I didn't see a link above but here is the list from Sept. 21st which would be at approx. 50K now.

Here's my revised doubling timetable, based on current infection data:

WHO's Interactive Map Journal is impressive:

According to the WHO (Case Confirmation and Surveillance Section in Interactive Map):

"A probable or suspected case is classified as confirmed when a sample from that person tests positive for EVD in the laboratory."

Little wonder that underreporting is happening. Cases are counted as "suspected" or "probable" until and unless lab results confirm.

Eighteen laboratories have the capacity to confirm EVD cases – 4 in Guinea, 9 in Liberia, and 5 Sierra Leone. The maximum testing capacity for each laboratory ranges from 50 to 100 samples per day.

A total of 622 health-care workers are known to have been infected with EVD up to the end of 30 November, 346 of whom have died.

No wonder there is a shortage of medical staff.

Thanks geoffb, the link I typed disappeared into the ether, but that was the post I tried to link to.

My favorite line in the link about Czar Klain's disappearance: "But the disease has largely faded from the public eye in the two months since he assumed his title." And that's really the point here, isn't it? Not having Ebola in the public eye is the real objective, not stopping it (at best a secondary objective -- harder to do, too).

I just check in here with Aesop every day or so to see if I'm still sane. So far so good. Ebola is still on, it seems, in the public eye or not.