(Somebody was asking about this info recently...-A.) 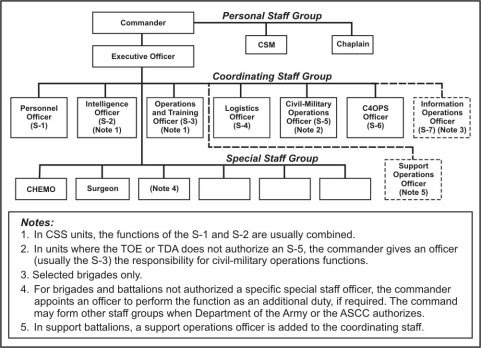 For any group larger than one person, the above breakdown is how any notional battalion (about 500 guys, since you asked) gets what it needs done. For reference, a Special Forces Operational Detachment A-team was originally conceived to be essentially the staff for any given guerrilla band of merry men (and women) when operating in an unconventional warfare role.
The same thing is done on a smaller scale at company (about 100 or so guys) level, and even the platoon (20-40 guys) level. And an ODA divvys up the functions amongst 12 guys. (And among 6, in a pinch.) Because it works, and everything that needs doing gets done, because somebody is answerable for getting it done, and knowing how that's coming along.

Anybody that's thinking of setting up, running, organizing, or participating in anything larger than a nuclear-family survival group should, at a minimum.

So let's get started with it.

When you hear somebody speaking militarese jargon S-1 (G-1 for divisions  - 10-15K guys - and bigger units) is personnel: they are the people responsible for everything to do with your people. Who they are, how many of them, their training, records, status, etc.

The takeaway for any group, small or large, is that this person/group would be responsible for recruiting people, knowing what jobs/functions each person could do, their medical status and conditions, and anything like that.

This is also the shop that takes care of all individual and unit records, mail and pay distribution, awards and decorations, legal problems, official correspondence, and a whole host of crap, most of which you won't deal with. But some of which you might. It's probably handier all around if any of those things, if they crop up, be handled by this person/group. If you have/need a lawyer, this section should be dealing with that.

The point is simply so that the people in charge and other staff members
a) know who to ask about the specifics of how many people they have, what jobs/functions they are filling, how well they can do them, how many they are short, etc.
b) don't have to deal with a metric f**kton of paperwork that always pops up in any group, sooner or later.

Whether you call them Human Resources, as in business, or the S-1, this section is going to recruit people, put them in jobs, keep track of them, and deal with anything that might come up related to people, paperwork, finances, etc.: leases, vouchers, purchase orders, funds, expenditures, property and tax information, legal correspondence, etc. ad infinitum.

In an actual larger group, they're the ones that make sure everyone in Group A gets the same word as Group B and Group C.
They also manage publications, which for an informal group would make them responsible for the group reference library, and information on everything you do.

The section leader is traditionally the Adjutant, by whose direction all the commander/leadership's policies and procedures are disseminated, and people assigned to the next lower level of group/unit.

If you were, for example, going to participate in something not as fusterclucked as the Malheur shenanigans, the S-1 should be the person who knows who you're bringing, how many there are, maintains a roster of them all, including pertinent personal information on them, and how many of them are present for whatever on any given day, including which shifts they're on, who's responsible for them, and any duty rosters of essential tasks.

Professionalism is an attitude, not a paycheck, and people who don't want to half-ass what they're doing, whether it's a small group's retreat, an actual peaceful protest (say, bussing to the state capitol to raise some hell with your public servants), or a group going, e.g. to patrol a ranch along an international border, would have someone designated to keep tabs on every swinging Richard at all times, and know where they were and who they were.

As membership names and information are sensitive, they'd have it secured, both in physical terms, and in cyber terms, and it'd be bomb-proof, both metaphorically, and literally. And yet they'd be able to pull it out at a moment's notice, for planning and administrative purposes. Or make it disappear forever, should that prove necessary.

Hopefully you can begin to understand why this is a lot more important than just shuffling papers.

After we hit the highlights of the various sections, we can also talk about how different sections co-ordinate among themselves to get things done.
As you may have deduced from the clever title and the opening graphic (which embiggens), we'll be hitting this topic quite a number of times.

Feel free to refer to any number of references on this stuff , from Army Field Manuals down to even Wikipedia. The more times you see the material, the easier it'll be to keep it in mind, especially if you didn't have to deal with it for 2-30 years as a cammie-clad guest of your Uncle Sugar.