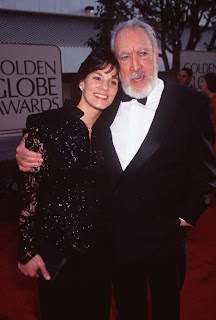 Antonio Rodolfo Quinn was born in 1915, and died in 2001, aged 86 years.
When I met him, he was 80 or so.
After a long and glorious career in big-screen Hollywood, Mr. Quinn had finally consented to do a TV commercial. For Pizza Hut, no less. I was there to tend to him, if need be, because he'd previously suffered multiple heart attacks and coronary bypass surgery. And he was 80.
We were shooting on a hot afternoon in California, on the Ahmanson Ranch property just west of the San Fernando Valley. It was your basic commercial set, low-budget for crew, no expense spared for the product. As it should be, I suppose.
We spent our morning doing the usual setting up and prepping for the shot. Just another day.
Then Anthony Quinn arrived.
He was pale as a ghost. I was really afraid I'd end up working on him medically, given that it was in the 80s to 90s. I had no idea when I first saw him that he was a force of nature.
I can't remember the name of the producers, directors, assistants, etc. on hand that day. They were just my bosses.
But I remember the reaction to Anthony Quinn.
The man had appeared in nearly 100 movies by then. He had not 1, but 2 Academy Awards sitting on a mantle somewhere, both of them older than me and almost the entire balance of the crew. He was larger than life.
When he appeared, every eye on the set was on him. I mean every one. Setting up was ignored, directors were ignored, producers were ignored, and Pizza Hut was a distant memory. I looked around, and saw that everyone, from one side of the set to another, was watching his every move. This was a legend, and no one was going to miss a single tick of the clock doing mundane tasks.
He went to wardrobe and makeup, which allowed a brief respite for the crew to finish preparing everything for his return among us.
He was sutiably restored to our attentions dressed like a return role in Viva Zapata II!
The son of a man who rode with Pancho Villa before moving to Los Angeles and becoming an assistant cameraman, the only Mexican-American to win an Oscar, and then win another one, was returned to us dressed as a campesino with bandoleers, looking like he'd just stepped off the set of The Magnificent Seven. Some twit at Pizza Hut's ad agency probably thought this was great fun rather than a hokey slap in the face. Fortunately for them, Mr. Quinn had a good sense of humor, and little in life left to prove, so he was a great good sport.
And could he laugh! With, once again, every eye on set focused on him like a laser beam, he came out, sat where he was directed, and got to work. There was no tension per se, but doubtless the other unknown actors and and background around him had to be a little self-conscious. Until in between takes, Quinn started telling a joke or two, and laughing at other remarks. The King was happy, so everyone else was too. What could be more natural? How could you top this?
We found out at lunch.
Along with Mr. Quinn were his former secretary, current companion, and yet-in-the-future third wife, 20-something year old Kathy Benvin. Who was gorgeous, which spoke well for an 80 year old actor's appeal. But this was just the warm-up.
She also had in tow Mr. Quinn's then latest progeny, 2 year old Antonia.
Now we were all witness to magic.
Because to see an 80-year-old man playing peek-a-boo and hide-and-seek with his 2-year-old little girl was to witness the most remarkable transformation. Quinn was no longer 80. He was more like 20 again. Just another father playing, laughing, cuddling, chasing, picking up and playing with his newest child. Gone were the years between, gone was his physical age, leaving only behind the pure, unadulterated delight a father takes in his daughter's smile and laughter.
After lunch, Mr. Quinn went back to work. Commercials are usually rather grueling work, and despite his age, the affair lasted the balance of the day, in the heat. I forgot about the ghastly palor on his face as I stayed near the on-camera activities, and watched Anthony Quinn work at 80 like the true professional he'd been since his 20s, in take after take, as we mere mortals all sweated and swilled down buckets of cold bottled water.
And at the end of the day, he still had a smile, a pleasant temper, and every bit of energy on camera he'd had at the beginning of the morning. And after he finished, he still had even more energy to devote to his little girl's attentions, giving her far better than he even gave to the camera.
And the entire crew, top to bottom, was continually mesmerized by every second of a day I'll never forget.
He was a lion.
Posted by Aesop at 8:07 AM