Word to your mother: Video Guy nails it out of the park.

Back in the day, I owned (on behalf of the Bn CO) not one, but two howitzers.

A 155mm M198 (the far heavier Army p.o.s hand-me-down, and exact predecessor of the much lighter and handier M777), and a literally ancient 105mm M101A1. Minted in 1940. (The Marines never throw anything away. They still have Civil War bayonets and Spanish-American War mess kits in pallet boxes at MCLB Barstow, to a metaphysical certainty, because "This stuff might come in handy some day!" I Sh*t Thee Not, my first issued helmet - in the Fleet -was a WWII steel pot with VN-era camo leaf pattern cover, my flak vest was a Korean War-era turtle-plate hand-me-down, and I carried an M-16A1. In 1984. Yes, really.)

Which light howitzer two - yes two - guys could pick up, and run down the road with like a Chinaman's rickshaw, place wherever it was needed, and send such packets of pure hatred as beehive AP rounds, which its bigger brothers could not do.

It was also less manpower intensive, needing just 5-6 guys, instead of 10-11, and could be pulled around by anything down to and including the venerable M151 Jeep.

It could also shoot shorter ranges, unlike the M198, which was literally useless on the Grenada Adventure by the 22nd MAU, so they left them on the ships, and turned Hotel Battery 3/10 into Provisional Rifle Company Hotel for that invasion.

And my personal bucket list fave, I got to use mine to play Special Percussion for a July 3rd concert including full orchestra, in a performance of Tchaikovsky's 1812 Overture, and then use it the next day for the 21-gun salute to the nation at noon the following day.

So I liked my little toy a lot more than the bigger one.

What that has to do with howitzer barrel life is this: 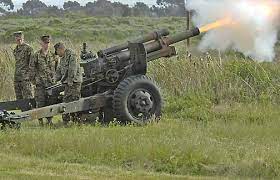 Up on Ye Solid Steel Breechblock of said nifty little howitzer, between the brass leveling points for the gunner's quadrant, were the manufacturing marks, serial number, and the dates my particular toy, the one I signed for ownership and responsibility of, had been rebarrelled. 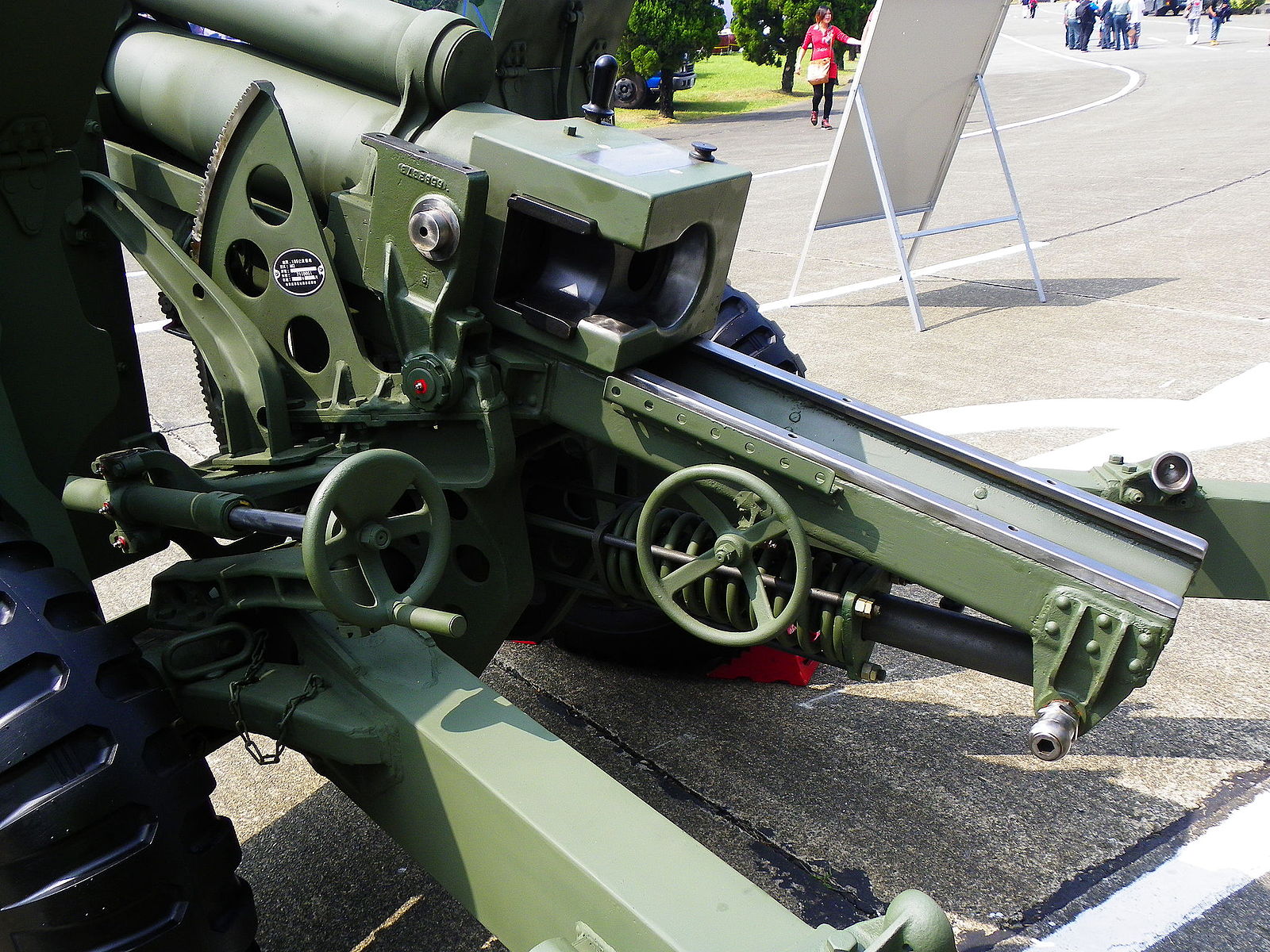 Which means my predecessors had shot the barrel of it out first on Guadalcanal, then again at the Frozen Chosin, and yet again during Tet '68 in Vietnam, before it was pulled out of storage and re-issued to me in the early 1980s, now and still sporting barrel #4.

Because as Good Marines, they had dutifully sent it back for depot maintenance and rebarrelling at their earliest convenience. (And yes, I would have killed to see the logbooks and unit diaries of the military actions to which that old warhorse had been invited. Alas, I never did. But clearly, it didn't get shot out in practice at 29 Palms.)

Point being, howitzer barrels have a service life, like anything else in the military.

So is the video guy correct? Beyond all doubt.

Does that matter for Russia?

Probably not so much. (Somebody re-read those last two lines - slowly, he's not very bright -to The Canuskistani Never-Served Except As A Busboy World's Foremost Expert, who always misses that stuff, because he can't read, and he'll probably just make something up. Again.) They're already only shooting minute of city anyways, so it's academic if they even give a flying f**k, but it may become problematic for a few privates if they ever need something like real accuracy in a danger-close mission near their own troops. But if this means Vlad's monkeys won't hit what they're aiming at, but might own-goal grease a few more Ivans from sloppiness, I say, let 'em go at it.

Maybe, with any luck, they'll skip the barrel stress-test inspections too, and do some destructive testing, to include a few Russian gun bunnies who'll suddenly become pink mist when a breech blows out during a fire mission.

It would matter to the Ukes, and make the sting of their fire missions all the harsher, as they keep achieving one-hit kills on APCs and tanks with GPS- and laser-guided munitions, while Vlad's guys will have trouble hitting the right city block, even after expending an entire day's basic load.

Which is why that 10:1 disparity in who's shooting what matters less in reality than it does to certain keyboard commandos.

War is all Hell.

If you're in a situation where you need to load your 155's with beehive rounds, you're pretty screwed.

And since when has Ivan cared about losing infantry to their own artillery? I believe they were the ones that coined the idea that if your assault force wasn't taking casualties from your arty prep, they weren't moving fast enough or close enough to the barrage laydown.

That and you might get killed by your own arty, but you will be killed by the NKVD heavy MGs behind you if you don't move fast enough.

I would not be surprised to see that Russian tradition make a comeback in the current festivities.

AHH DAYS-YEARS OF MY YOUTH:

1/5 2/3 8th Comm 61-55 Air Party, AM Hqtrs jeep mount radio, built in 1937 for the Navy who generously gave it to the Corps when they were through with it. Liaison party with the grunts, MAY UHF line of sight for talking to aircraft, three foot high, 12 X 12 and powered by a 6 volt wet cell car battery, had two spares in a lead line box carried by a grunt we hijacked.

Don't when my Garand was made but in Westpac I carried a .45 Remington Rand 1943.

Went to The Dominican in 65 with a new single side band van, only comm to Norfolk for three days, Navy guys pissed. This van is probably in a warehouse somewhere awaiting assignment to a reserve outfit in the Midwest.

Having in the Army been one of those guys that was assessing mortar tubes and unpropelled howitzers (Small Arms Repairer among other MOS's) and red tagging them if they were not already red taged even in a guard unit I will tell you that even on 2 year intervals (Active duty is yearly for a total assessment) it really does not take a whole lot of rounds especally if they are putting in the full powder loads (Rarely happens due to the expense in both powder and well wear and tear) to start to eat up the rifling. You can blast your M16s/4s and ARs till even the rifling starts to get to the no go stage and they still in some caes be very accurate. (Had a troop email me asking why I took away his sweet shooting M16A1 Rebuild to an A2. But SGT it is so accurate! Yah buddy half the throat's gone and the no go gage is swallowed. 1/3rd the rifling's gone.) But those tubes were really apparent with how quick they could be shot out.

Now, Aesop this does make an interesting question though, I'd guess Russia gives no fucks about their tubes or are not likely rotating them in and out for assessment and overhaul but that also stands for the Ukes. The infusions of new or lightly used US/NATO equipment might offset some of this but they play by the same rules too and it's really damn hard to overhaul or rebuild equipment in the field provided it lasts long enough to do so. Some of me wants to like you say so what, Russia is fine with just minute of mile in to a city. If some of the stories about the Ukes using drones and being mobile are true, even so if that howitzer is not hit eventually they will run in to issues with being able to drop a 155 in a 10 foot grid square. Interesting times.

Brother,
Didn't know you got to shoot the 105. VERY cool! We go back a bit with that piece; my Dad was a Battery Exec in Korea and could still direct the "Cannoneer's Boogie" if needed (sharp ol guy, he is). Would love to liberate an example with a Deuce-and-a- half worth of ammo. Believe I could do some good work myself. Love some beehive.
Boat Guy

Since you mentioned the 1812 Overture, I thought I'd add this little anecdote: One of the greatest moments in my musical upbringing was attending a Boston Pops 4th of July concert in the early '90s, conducted at that time by the venerable John Williams. Prior to the playing of the aforementioned piece, Mr. Williams introduced as their accompaniment the salute battery of a nearby National Guard unit, commanded that night by the Bn CO himself. Being an orchestra, they needed to tune...

Performance also included fireworks over the river. Even some 3 decades later, just relaying the story still brings a laugh-till-I-cry literal LoL and sh*t-eating grin to my face.

The Russian Rifling might get shot out, but the Russian tubes likely will not explode.

The American (and Western) howitzer tubes are made with stressed forging (iirc). Which means that the metal retains a lot of stress. This means that the tube can be lighter and still maintain integrity as the round travels down it engaging the rifling. But it also means that catastrophic failure is possible (pink mist) at end of service life.

The Russian (and formerly Chinese) tubes were made with unstressed forging (iirc). So they're a lot heavier. But they're less likely to pink mist at end of service life.

On the other hand, for the Ukrainians, they might have that Russian habit and think the barrels are more forgiving. Thus they might be more likely to get pink mist after they shoot out the rifling. (And with all of the Excalibur kits going their way, they might not care about the rifling getting shot out. Thus more risk of catastrophic failure.)

Awesome commentary. I have the 1812 on CD with “digitally recorded cannons”.

Woke the neighbors with that before on a particularly ornery morning.


Wasn’t a cannon cocker in a previous life.

He doesn’t talk much about it but, his gist is, it’s artillery. It doesn’t have to go into a pickle barrel, just somewhere nearby.

He took me to a firepower demonstration on Ft Sill, OK when I was a kid.


Minute of city or not, you do not want to be on the receiving end of that.

I recall a sighting, 3-4 weeks ago, of a trainload of artilary pieces,
from the middle of the country heading west, to LNDR?
There was no count, implication was +50. Maybe replacements for worn pieces?
FWIW,, https://aurelien2022.substack.com/p/after-the-cavalry-didnt-charge