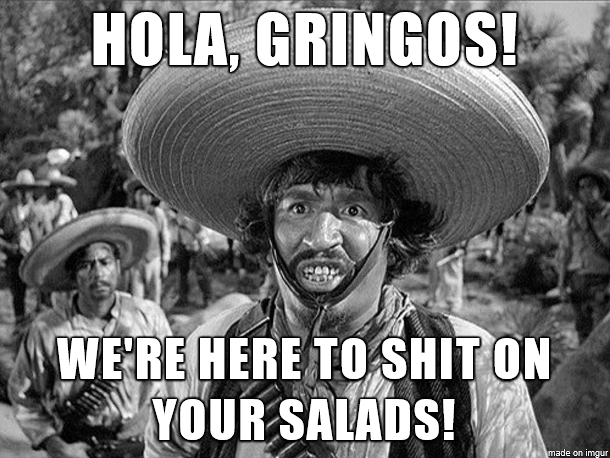 Considering the practice of "fertilizing" the fields with bio-solids, aka human and animal waste, the proliferation of diseases is not surprising. I would grow my own food if it wasn't for the constant spraying from above. Even if you think you have organic vegetables in your garden they will still be contaminated by the chem-trail fallout.

Shout out to the organic crowd out there. Get real. You are not doing anyone any favors by claiming your food is better. It just is not true. IMO

Geez, and it isn't even my birthday or Christmas.

By a strange chemical coincidence, you're aware that the entire by-prodcuts of combustion, in every case, are CO2 and H20, right?

And that planes have been running solely on hydrocarbon fuel since the Wright brothers figured things out at Kitty Hawk 115 years ago?

So, do you figure it's more likely that literally millions of pilots, ground crew, maintenance workers, chemical company employees, and airline executives are engaged in a massive worldwide unacknowledged conspiracy to produce, load, airlift, and spray mysterious "chem trails" over the entirety of the inhabited earth, and that only the special people online have cracked the secret Illuminati code?

Or is it maybe just barely possible that you're looking at not "chem trails" but rather contrails, i.e. the product of what happens when water vapor is ejected from combustion engines at altitude and cools due to outside temps below freezing?? Like was observed since the 1930s, when we first started flying that high on a regular basis?? Just maybe??

Loosen the tin foil, it's cutting off the circulation to your brain.
Science: still a thing.

Aesop I love your wit. I will be laughing all day thinking about your replies.

And thanks for your reply on my question.

Howzabout the obvious simple solution...........like washing your lettuce before using it?

Especially since they add flouride to the water now.

The problem with leafy greens is that it is almost impossible to fully wash them due to the large surface area and many folds - hence why there are so many more problems with it than other types of food.

On a different note, I've never seen a 24 hour a day gun store - have you? or are the anti-gunners just making things up again?

I've got to say the first time I saw the romaine story, I thought it was somebody's idea of a joke. "Let's make salad illegal! Nothing for thanksgiving but meat and potatoes, or turkey, stuffing and sweet potato dishes!" (I honestly have a hard time telling real news stories from the Onion these days)

The story still doesn't make sense. In a typical E. Coli outbreak they seem to be able to tell you the specific farm it came from and I think we're close to being able to tell you which farm worker crapped in the field from DNA. This time, instead of specificity we got "throw out all the romaine you have, regardless of where you bought it, what state it's from or if you bought it as heads, individually washed leaves, or in bags"

Because 32 people out of the populations of the US and Canada got sick. Can I SWAG that as 320 million people? A one in 10 million chance.

Just use Swiss chard instead of Romaine. Those Swiss are fastidious about cleanliness and all that pure, mountain air is good for your health. Wait. They don't grow chard in the alps?

Yup, that dangerous dihydrgogen oxide chemical emitted by those jet aircraft is extremely hazardous. It's the same chemical humans produce when they exhale, along with CO2. Simple solution to atmospheric CO2: everyone on earth should hold their breath for 15 minutes a day. That, or kill all the Chinese.

Mega Food Corporations should stop putting things that contain E. Coli on our food. Unfortunately that's probably too intelligent for these people to understand. I'm surprised they can even put their pants on let alone manage anything bigger than a stand at a farmer's market. Corporate culture, I swear.

Why do we even care? E. Coli on lettuce is a non-problem. It's only affected 32 people and killed no one. We should be worrying about diabetes, herat disease, cancer, and auto accidents before we get to Romaine Lettuce surveillance. Seriously, people, priorities.