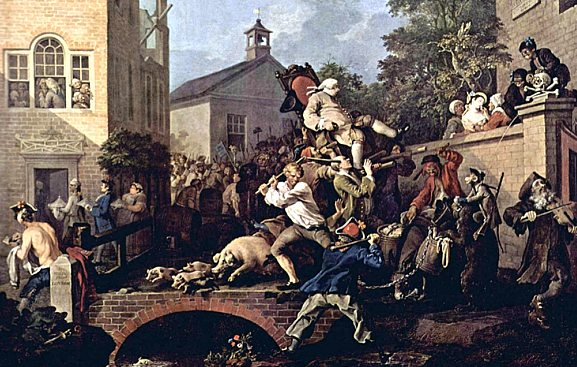 I used to think that the biggest problem was the lack of any credible alternative offered to the voters. But the Dutch general election last March proved me wrong — on March 15 the voters had a clear alternative. Everyone in the Netherlands knew who Geert Wilders was, and exactly what he stood for. They’d heard him say the same things for many years. The awful future that he had predicted was being realized before their very eyes.
Yet they didn’t vote for him. Not enough of them. Eventually, after a protracted minuet of negotiations, they will get a coalition government of More of the Same. Because that’s what they voted for.

The core problem is not even the New World Order, although all the politicians and apparatchiks who are pouring the fire ants over our heads are disciples or paid servants of the NWO. But we, the electorate of the nations west of the Iron Curtain, keep voting in these same loathsome snoids, over and over again.And that is the core problem.

1) What have the voters in Netherlands, Germany, France, or the UK ever done, to lead you to believe any sort of electoral common sense was likely, let alone possible? (Nota bene "normative" common sense as voting policy isn't even suggested as an option.)
2) When and where can one point to any such sensible outcome(s)? 15, 20,  30 years ago? More? Anytime since the Second World War? Earlier?

The pool was polluted long since, generations since, and the sort of behavior one might hope for has variously emigrated elsewhere, died off, been bred and "educated" out of entire generations, for generations, and what little that remains is the truest miracle.
It's not incredible that Wilders, for your example, didn't get enough votes; the miracle is that he even existed as an option, and got any votes at all.

The elites, financial, educational, media, entertainment, and governmental, have been amalgamating feces and sawdust with steak for so long, most of the peoples in question can't recognize the taste of actual meat anymore, and actually prefer what they have been born to, raised on, and died under, for going on decades and decades.

Once in a miraculously great while, penicillin and mold may grow on the same piece of bread. But mainly, the mold that overtakes the bread is all malignant.
We're living in societies where they haven't even been growing the mold in bread, but on a cultural stew of the vilest sort, with the foulest strains pre-selected and nurtured, then foisted upon people before they're old enough to know good from bad.

Under those conditions, the outcomes noted aren't surprising, they are in fact exactly what one should expect, and exactly the outcome planned for and worked for by those mixing up batch after batch of such foetid horrors.

The true miracle is the recessive genomes that manage to thrive despite such a malignant incubation, and manage to allow a remnant to mature and recognize that both the agar they've been handed, and the social scientists who planted them in it, are exactly the core problem you seek.

Amidst that thesis, ponder the allegorical choice by someone like J. K. Rowling, of the malign servants of the Dark Lord of her fictional universe being named "Death Eaters".

Every once in awhile, when and where least expected, the masks slip off, just a bit.

Been following your blog for a while now. I can always rely on you for posting very well written, on point and liberty minded positions on the madness of the world, especially as it relates to the decline of FUSA.

However, the past month or so you have really stepped up your game. Well done sir, I like how you roll. Posts have been educational and enlightening. I find reading comprehension a questionable skill in my business circles, but I continue to try and spread the liberty message with your posts often as a reference point.

Folks seem completely checked out from the reality of what's happening around them, but I will never raise the white flag.

Thanks and keep up the good work!

Thanks. Glad you've enjoyed the output.
I try to do what I can.

Over the past two centuries, those in Europe who valued liberty, opportunity , and individualism came to America. We are their descendants.

Those who did not hold those values remained in Europe. The current generation is their descendants.

Yes it does explain a lot. In addition, the majority of Germans with the most testosterone and the most fighting spirit were wiped out in WWI and WWII. The Germans you see today are for the most part the descendants of the beta males who were not fit for military service.

Amen brother. When I state these facts to people they always bring up the "French Resistance" ha. Then I show them the proof the french resistance was nothing more than communists. Europe was dead even before Hilter, he knew it. He over reached. In "my travels" I would always run into the load mouth Germans, "haven't you guys lost every world war you started". Third one is in play right now.

Keep up the great work.

I've thought for a long time that the first world war was a disaster for the Western world. Britain and Germany and the rest of Europe lost almost all of their finest men. What was left fathered the next generation. The best of those were killed in the WW2. Now we see the result and now the barbarians are walking through the gate. Darwin in (reverse) action.