The Problem With Fanboys 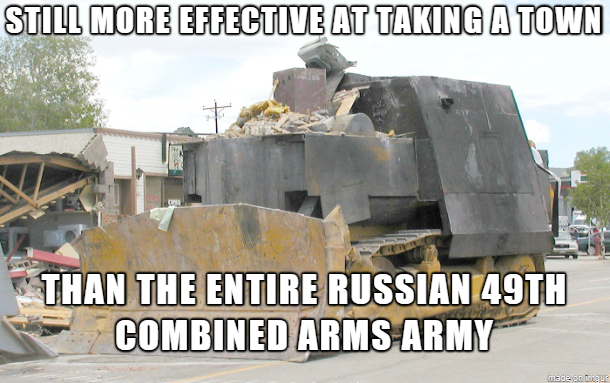 When literally nothing can shake your belief that Russia is "winning" in Ukraine, you're not advocating a position based on facts and logic, you're proselytizing for a mystery religion.

Russians stacked up for weeks with no notable gains? Russia is winning!

More Russian generals dead in 4 weeks in Ukraine than the US lost in 3 major wars and five smaller conflicts since 1964? Russia is winning!

Video after video of Russian tanks and AFVs getting blown up, captured intact, out of gas, loaded with ammo, even towed into their barns by farmers with tractors? Russia is winning!

Russian soldiers filmed in tears claiming they were lied to, surrendering cold, hungry, and broken, crying to mama, and running over their own brigade commanders with a tank in rage? Russia is winning!

Normally, one has to hold to a belief in globull warmism, systemic racism, or the holiness of diversity to believe this level of bullshit despite all contrary evidence.

Let's talk turkey: Russia's army, on paper, started this conflict a 10:1 favorite. This was literally a modern David-versus-Goliath tale.

Then, Reality kicked in.

1) The Ukrainians rather obviously have united in not wanting to be taken over. This, alone, guarantees Russia can never, ever win, unless they kill every single Ukrainian in existence.

2) The Russians troops of 2022 are not the Russian Soviet Army of 1980. It's a shell of its former self, and the guys that fought in their last combined-forces war are all 90+, or dead. They haven't fought a war like this since 1945, which is to say, the institutional ability to do so is ancient history. They're ill-equipped, under-trained, unmotivated, poorly led, hopelessly inadequate to knocking off a relative pipsqueak army like Ukraine's, and have no chance in hell of taking on 40M partisans for the next 20 years.

3) Their tactics are 1950, but they're running into weapons from 2020. Picture Pickett's Charge at the Somme, and you're starting to get the idea. Unescorted tanks are being turned into corpse canneries. Guided by drone surveillance and targeting, and blown to hell by defenders the fanboys say are "cut off, without any chances". [Murphy's Rules Of Combat: When you're winning, be sure and tell the enemy.]

4) Their secure comms didn't work. Their unsecure comms are jammed. They tried to use cell phones, which were intercepted at first then taken offline. They're now down to wire, and runners.

5) Command and control is getting whacked at a prodigious rate, in a notoriously top-down hierarchical command structure where anyone below the rank of general has to ask permission to do anything. And their generals keep having their heads go all explodey.

Contrary to the fanboys' fervent contentions, this could be disproven. The Russians could start moving through Ukraine like a German blitzkrieg, kicking ass and taking names. They could take Kyiv, roll across the Dnieper, and hurtle all the way to the borders of Romania, Hungary, Slovakia, and Poland, driving hordes of fleeing ethnic Ukrainians into permanent exile forever. But a month into this, they show no signs of the basic ability to do any of that. Hundreds of MANPADs have kept them from gaining air superiority. Javelins have made their armored attempts almost as obsolete as Polish horse cavalry charging panzers with wooden lances.

In a move straight from my namesake, the currently operative cover story is that they "never really wanted to capture Kyiv", and that sitting bogged down in mud, immobile, and watching their capabilities blown to hell day in and day out for a month was their cunning battle strategery all along. How cleverly facile. Move the goalposts, and declare that you scored a touchdown. Brilliant! Russia hasn't done that so hamfisted-obviously since the '72 Olympics men's basketball finals. 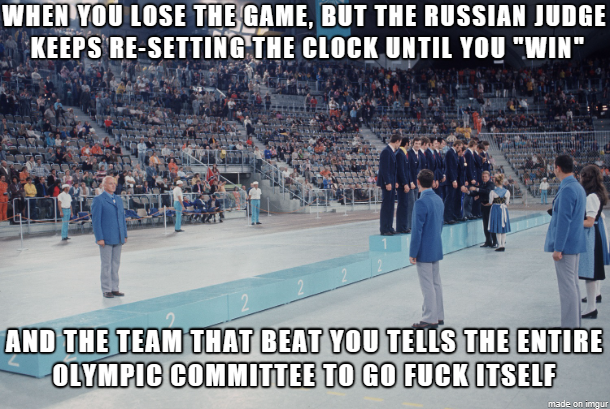 Now you've got Russian Kremlin spokesholes trying to sell you the line that "wherever we ended up now is where we really wanted to be all along".

With maybe 85% of it's raggedy-ass incompetents left, despite running out of fuel, food, and munitions with every shot fired, might Russia still manage to trample Ukraine, by sheer weight of forces? Sure.

And then what?!? Face a population 10 times more fiercely motivated and 500 times bigger than the mujahideen in Afghanistan, last seen kicking the once-mighty Soviet Army the fuck out of that debacle?

Putin can't even keep Russians in Moscow in line over this invasion, even after arresting them in the thousands; he has fuck-all chance of keeping Ukrainians down, even if he captures Zelenskyy and puts him up against a wall on live TV tomorrow. Despite Russia turning Mariupol into a modern-day Hiroshima (minus the radioactivity), no one is running up to the Ukrainian government HQ and throwing molotov cocktails at the walls. OTOH, Putin appears to be getting his advice on charm and leadership from the biographies of Idi Amin and Saddam Hussein. Nothing he has done, is doing, or even could be contemplating, are the things people do who are winning a war.

But the fanboys, reading some Q-tarded version of Russian hagiography, have convinced themselves St. Vladimir is playing 97-dimensional chess here.

If believing that level of delusion helps you get through the day, that's your business, but don't piss yourselves when things don't work out like you thought they would.

Given the raving idiot on our end of the playground, things overall are liable to go from bad to really shitty, whether fast, or more slowly. It would therefore behoove you to stop sniffing glue as you get your own crap in one bag, and start facing up to how things really are right here at home. Crazy people are a luxury in hard times, and the first to be thrown under the bus. Putin isn't your friend, never was, and he isn't coming to save you either.

And whatever the final outcome, Russia turning out to be the most hamstrung, impotent, and incompetent fighting machine since the Judean People's Front is the best news to come out in 2022. The stupid bastard running the show there not realizing that is the worst. It's never pretty when delusional megalomania meets harsh reality, and it's worse for anyone in range of the rage that results from someone putting a Javelin missile right through that castle you were building in the clouds.

And now, he can't have heart-to-heart chats with Obozo, nor even go to Pedo Island to relax and decompress.

And Czar Vladimir wept, because there were no more worlds his paper army could conquer.

So stop gargling Putin's junk, and start learning lessons from the side you hate to admit is stacking them up.

Because when Spicy Time starts here, which side d'ya think you're going to be on...??

Leviathan's? Or the guys trying to bring the beast down?

Best wrap your head around that answer right quick.

Objects in crystal ball are closer than they appear.