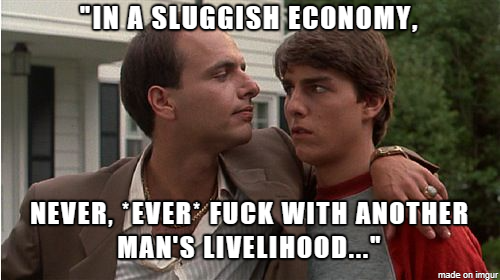 With the announcement of widespread blatant and open abrogation of fundamental civil liberties Thursday by the Pretender-In-Chief, by both federal and complicit state governments and private employers, delivered with all the enthusiasm of a two-year-old late for his naptime, hundreds of thousands to millions of Americans have a grave choice on the horizon: stand up and be counted, walk away, or "just follow orders", and if the last, be rightly counted as the SS and Gestapo enforcing the new Federal Kristallnacht Plan, and administering its implementation. I'm talking about the minions of government, from local apparatchiks all the way to the teat-suckers from the District of Criminals.

I beseech you, one and all, to choose wisely: either refuse to comply, or walk away.

Because the minute those unconstitutional directives are put into play, wholly apart from the 19 governors and 2 state AGs who've already pledged to fight this hogwash tooth and nail in the courts, you're facing a much bigger problem.

It's the 80-effing-million-plus Americans who may not be inclined to wait and see how unelected black Nazgul feel disposed to view their human rights and civil liberties, or wait patiently for the interminable wheels of justice to grind their grist, when their livelihoods, their families, and their very corporeal existence, is measured out in paychecks, bank balances, and calories.

And if you draw a federal paycheck, or one from a state or county, or even a city that isn't fighting this tooth and nail, as the rubber-meets-the-road end of this deal, you're going to have a real big problem looming in your windshield in about 0.2 seconds.

All those put-upon folks will not, y'see, patiently sit back and watch their bank accounts drain down to zero - AGAIN.

They will not meekly watch their pantries dwindle to dust bunnies, while their children complain of hunger, and their spouses' faces become gaunt and hollow.

They will not meekly and serenely submit to becoming involuntary refugees in their own land, beholden to DotGov for everything from food to shelter to medical care to life itself, purely at Leviathan's whim and pleasure.

Long before those days, they're going to reach over the mantle, or into the closet or safe, and they're going to grab rifles, and load magazines. SOME OF THEM ARE WAY AHEAD OF THE CLASS ON THAT, BELIEVE ME. And then they're going to declare open season on every motherfucker with an ID badge, a business card, or license plates that ID them as government minions. Every. Last. One. No game regs, and screw the bag limit.

You're about to become the buffalo herds and the passenger pigeon in the coming morality play, entitled Bosnia X Rwanda, in Beirut.

And they'll break your government rice bowl, steal your government cheese, tear down your meathouse, and end your pathetic existence, in about a New York Minute. If even 1/10th of them set about that task, they'll only outnumber every member of the entire military and governmental machine, nationwide, by 2:1. (And, word to your mothers, two-thirds of the people you think are "your guys", most particularly in the dotMil, aren't "your guys", never were, and never will be. So you're likely behind the 8-ball at 6:1 odds against, or worse, for openers.)

If even 1% of the unvaxxed decide to end this bullshit that way, it would be an army only sixteen times bigger than was the raggedy-ass Taliban of illiterate goat-herders who just chased us out of A-stan with our nose bloodied, no nuts, and our tails between our legs.

And it's not going to be a stand up fight, and there'll be no front lines.

Government employees will get popped taking a crap. They'll be shivved in the bathroom with weapons better than anything prison cons can make, limited only by the imagination of the makers, with the whole world of choices at their fingertips. Do you have enough hired guns to cover each and every one of you while you pee or take a shit? Every day, every time? Forever?

What about when you get coffee at the corner? You'll be garroted taking out the trash and walking the dog. Your Amazon package will explode. Maybe it will take out your spouse or kids. Maybe that won't be an accident. Your house will keep catching on fire. Even odds, after all the doors and windows are sealed shut.

You won't have any Green Zone or friendly air cover for your work, nor the trips to and from. There aren't enough cops and feds to protect you, and enforce the normal laws, and crime is rising already on that front even as we speak. You'll be bait, and all that will be left after will be an empty hook, ready for any schmuck stupid enough to apply for your job five seconds after your life insurance is activated.

And maybe, just maybe, you'll have the same terror visited on you that Mr. Fraudulent just threatened 1/3 of the country with. Maybe they won't kill you, the first time. They'll just use a length of pipe or rebar to turn your knees into a jigsaw puzzle, and your teeth into pea gravel. You'll be just as unemployed, at least until you learn to subsist on oatmeal puree three times a day, and how to walk again. Maybe. Someday.

Maybe your car won't explode when you start it. Maybe your gas line won't accidentally leak and blow up your house and half the block while you sleep. Maybe random bullets won't fly through your windshield, or into your cubicle from across the street, or through the walls of your house at all hours day and night. Maybe you won't keep losing co-workers in crosswalks, or falls onto the subway, or drowned in the toilet, or electrocuted when you grab your own doorknob, or any one of a hundred other ways.

But I wouldn't bet on it, because broke and hungry people aren't known for their compassion towards their tormenters.

Not me, of course. It goes without saying. I'm morally upright, and law-abiding. I don't even tear the labels off mattresses. But in a talent pool of 80,000,000, not everyone you can imagine will be as kind, sensitive, compassionate, patient, understanding, and steadfastly law-abiding as I am. That's why I'm not advocating this. Nuh-uh. Nope. Not me. Nosiree. The folks you least want to, will figure it out all by themselves, and your first clue will be a blinding flash of pain, with less warning than Pearl Harbor. But you're willing to bet your future on the imagined, and imaginary, reasonableness of 1/3rd of everyone in the entire country? Every day? Non-stop, once this nonsense kicks off? Gutsy move, man. ROWYBS. Hope it works out for ya.

Because when the payback starts - note, when, not if - no one anywhere will give a wet fart for what happens to you, including your overlords. Things are tough all over, cupcake.

Like every serial rapist the DemoCommunists install in the Oval Office, Gropey Joe thinks this gig means no one can say "No!" to him any more. The fact that not everyone will lie back and quietly submit to being vaxx-raped at his behest is going to be one the worst-kept surprises of the century, I can promise you.

But this doesn't have to befall any one of you. That's because, unlike what Gropey Dopey didn't give 80,000,000+ Americans in his vaxxholian little tantrum, you've got something that lets you avoid all the unpleasantness to come.

You actually have a CHOICE.

As advised for ALL impending catastrophes, BE SOMEWHERE ELSE.

You can tell your bosses, "Hell no, we aren't doing that. Not any of it."

You can even sabotage it from the inside, and pass on intel to the outside.

Or, you can just walk out the door, without a peep. 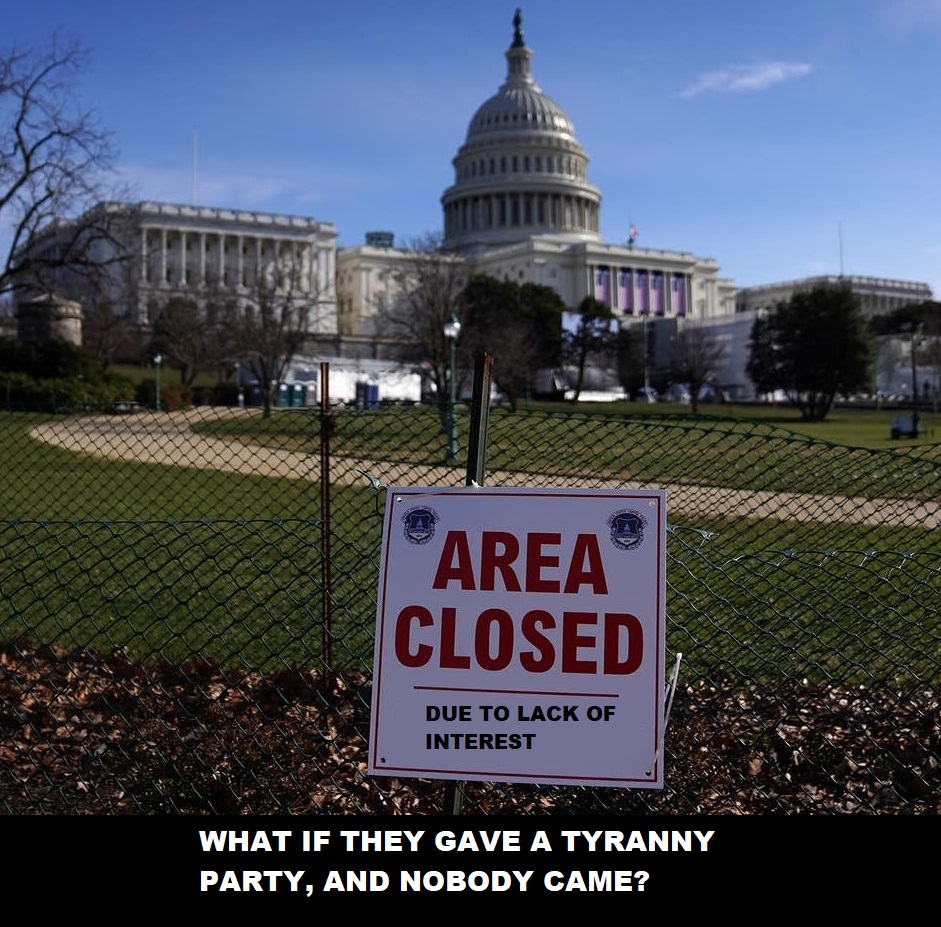 So, you can either be one of the people getting fed, for a while, while you load the boxcars with your friends and neighbors.

Or, you can join the citizenry, and start monkeywrenching this entire tyrannical regime, in every way possible, with a clear conscience, the moral high ground, and righteous perspective on the fascist cancer metastasizing before our eyes.

But whether you like it or not, your bosses have forced this choice on you, too.

And you're either with liberty and freedom-loving Americans on this.

Or, you're with the terrorists. Starting with the Terrorist In Chief. 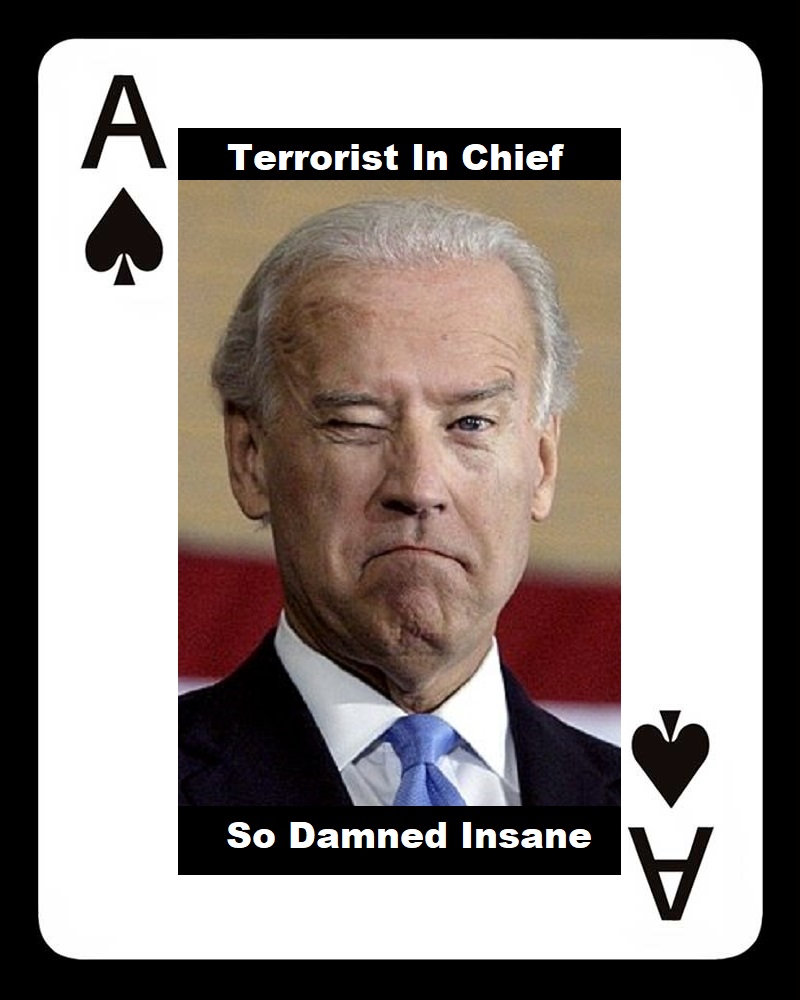 Maybe ask the Last Guy how it worked out for him and his regime, being the Ace Of Spades. While you decide which team you want to play for. And consider an early retirement, versus swinging in whatever breeze blows under the open trap door on the gibbet, or taking one - or about twenty - for the team. 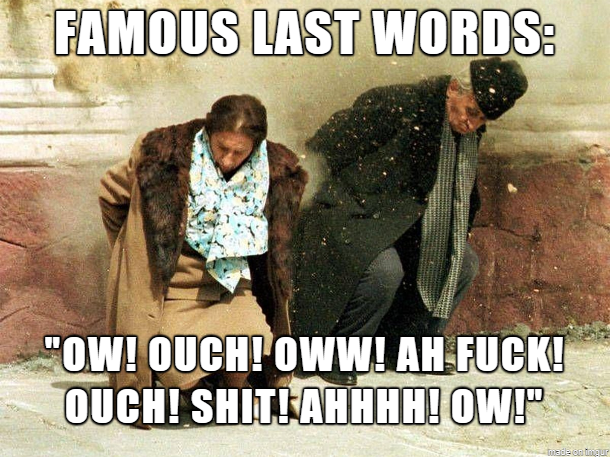 And once the kickoff whistle blows, you're out of options.