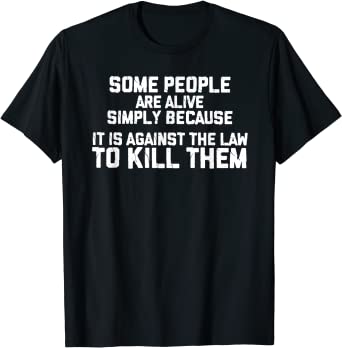 From JKb at Gun Free Zone:

We are so conditioned to be peaceful people that most good people are hardly capable of engaging in serious violence.

I have talked about the 80/20 rule, where studies conducted by the military after WWII showed that 80% of soldiers could not consciously line up their sights and kill an enemy.  To get good people to kill, they either can’t see their targets (such as artillery or aerial bombardment) or you have to break them psychologically and recondition them to be shooters (such as the military’s reflexive shooting training)."

Yeah, no. Throwing the b.s. flag on pretty much all of that.

Let's be honest with ourselves on this point.

Killing isn't hard. Not killing  the @$$holes who are overqualified for deserving it is what's hard. And that resolve, in otherwise "civilized" society, is what's melting like an ice block on a hot grill, with each passing day. Most good people are simply capable of restraining themselves from doing that which every fiber of their being screams out to undertake. Far from being "hardly capable", they're ready, willing, and able, as 2,000,000 successful firearms defenses per year, for half a century, just in the U.S. alone, demonstrates, once every fifteen seconds. The mere demonstration of the obvious capability to kill someone is sufficient, in most cases, to obviate the need for follow-through, but rather than proving incapability to kill, it proves exactly the opposite is true. And GFZ knows this, because the site frequently heads all such stories as "Another failure in the victim selection process", i.e. what happens when a hyena attacks a Cape Buffalo it thought was a rabbit.

Those "studies" vaguely referenced were numbers pulled solely out of S.L.A. Marshall's hindquarters, and so is all extrapolation based on them, most particularly the eructations of the blithering idiot Grossman who wrote the book On Killing* based on them to any degree, which in actual scientific (and military) circles is regarded as a dorm room bull session that got out of hand, and should have been printed on toilet paper to be functionally useful.

Humans have been knocking each other off with little compunction since Cain and Abel's time, and anything that ignores that fact is quite simply counter-factual wishful thinking. If murder was hard to do, rather than all too easy, there wouldn't have been a Commandment about that, nor even any need for one. Reality is rather exactly the opposite then, isn't it?

80% of WWI soldiers didn't find themselves unable to pull a trigger, nor those in the Civil War, nor the Revolutionary War, nor any other war before and since, and they were obviously standing far closer to their targets the farther back in time we travel, until we get to Romans in ranks with pointy gladii. The reality is that 80% of soldiers in WWII weren't combat troops to begin with, and didn't need to shoot at anyone, ever, not once, nor had much firsthand experience with actual war, let alone the shooting part.

The fact that most of the defenders at Bastogne on the front lines were down to a few rounds, or just bayonets, puts the lie to all that "didn't shoot" nonsense. On the contrary, all military training and logistics supply - since ever - was geared towards getting soldiers to shoot less, not more. That's why they didn't want repeating rifles in most armies at the outset, FFS, and why the British were slaughtered at Isandlwana - because of rules expressly trying to limit ammo expenditure. You could look it up.

Kyle Rittenhouse had no military "reflexive shooting" training, yet capped three bad guys in seconds, with a 66% kill rate, and other than a few minutes on the witness stand, appears none the worse for wear. The actual "trauma" is the guy with his heart blown open, or the idiot minus a bicep now, both much wiser, and one happily too late for it to matter. Good riddance.

Ditto for the guy (in OK? IIRC) who knocked off a mess of home invaders with his AR as well, and then dialed 911 to report the fact, in a similar manner. People fight, and kill, when they have to, and it requires overcoming nothing but mentally flipping the switch in the head saying "It's okay to do this" at a given moment. Like the national use of nuclear weapons, we have built-in safeties. But anyone who thinks that either bullets or missiles won't fly at the appropriate time, because "good" people are too hesitant to do it, is going to die with one helluva surprised look on their face. 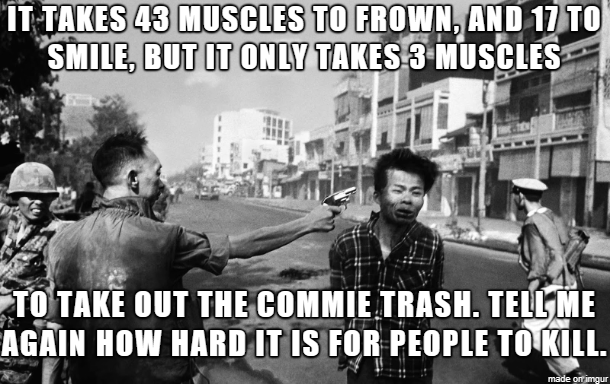 The entire idea that it's hard to get people to kill each other has only been contradicted by all human history since ever, and by the most elegant expedient negative feedback loop ever devised: those who feel thusly are dealt with rather harshly and brutally by Darwinian de-selection from the future breeding pool. Forever. The kill-hesitant gene was crib strangled some millennia ago. The only people left are those least hesitant.

And as any foole knows, "vegetarian" was an Indian word for "lousy hunter".

The biggest change in modern times is the fact that one's dinner is pre-loaded onto trays at the butcher shop, rather than needing to be harvested by hand with rifle, shotgun, bow, or a hatchet out back of the chicken coop, but to listen to the ninnies, that lack of experience is more than made up for by Tom and Jerry, Yosemite Sam, Elmer Fudd, and Call Of Duty blasting away. Yet the overall societal murder rate has plummeted like a stone even as pretend violence has multiplied like rabbits on Spanish Fly, which undermines their whole silly thesis.

Wise people curb those urges until it's legally justified, foolish people "just do it" for the lightest of slights. But the idea it's a hard barrier to cross, for anyone, is quite simply recockulous, based purely on the statistics. People don't follow through on the urges, for good and prudent reasons and enlightened self-interest, but those urges are in our DNA, and always have been. The actual divide is between high IQ and low, and prosperity vs. hardship, not stable vs. psychotic, but it's overwhelmingly been politics that have turned most people into killers, and the politics that lead the parade is one of the stupidest ideas and forms of government yet devised. Even religion can't hold a candle to Marxism, and when you combine the worst of both worlds, you get the political-religious abortion that is Islam, at war with everyone for 1500 years and counting, and when they run out of infidels, they start knocking off each other, because that default response is baked into their fruitcake.

People are not pacifist salad-eaters, outside of Berzerkley (and look what happened to that plan, in five minutes in Kenosha). We're bloodthirsty omnivores. Any protestations to the contrary are self-delusional. 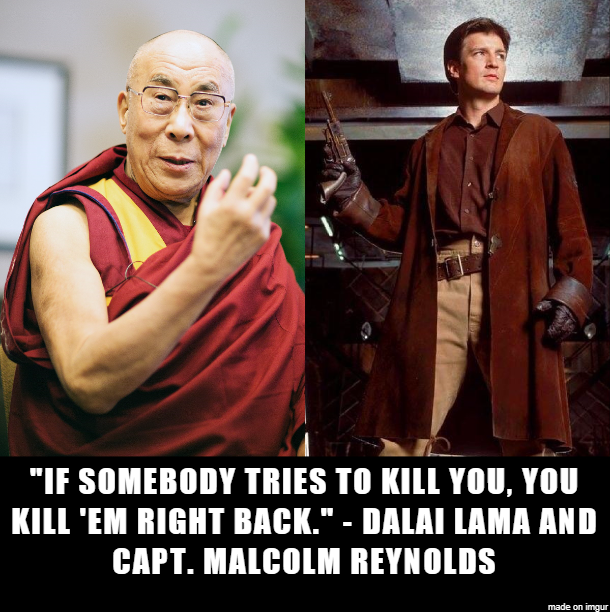 The actual miracle is that we choose to kill so rarely, rather than every day being a Killing Fields obstacle course. If life were consequence-free, just going to work would be an amalgamation of The Purge and The Walking Dead, and you'd find that Rick and Darryl were the arch-types in life, not the outliers. Thank a merciful deity or blind chance that it isn't so. Yet.

So please, let's bury that bullshit about killing being aberrational in humans in the compost heap it should have stayed in, and where it rightly belongs. It's good for nothing but rose fertilizer.

*[To be completely fair, the portions dealing with the physical experience of life-threatening moments is worth the price of the book: auditory exclusion, extreme tunnel-vision, etc. You should read those as gospel, to learn beforehand what you'll be dealing with in the moment. Any of the rest of the psychobabble in the book telling you how difficult killing is, and why violence in movies, cartoons, and video games is so dangerous, can be accurately and succinctly described as so much horseshit.]