Mighty White Of Them, In An On-A-Stick Kind Of Way... 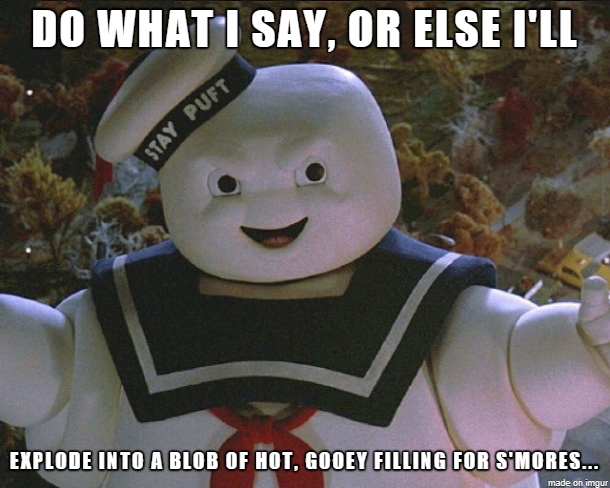 In what is certainly of minor interest to the world, but rather keenly followed by the host, TPTB have turned out to be the StayPuft Marshmallow Man of COVIDiocy enforcement.

Faced with 10-30% of available staff being flushed out the door, AFAIK, every request for exemption on medical or religious grounds, including our own, has been granted, in writing.

IOW, we retain our job indefinitely, despite refusal to be jabbed with the Vaxx.

We haven't seen a retreat this fast nor utterly complete since Gropey Dopey Joe pulled us out of Afghanistan.

It could be mere coincidence, and being overwhelmed with requests for exemption, but the process was so truncated with the September 30 deadline approaching like a freight train, or it could have been our own eloquence in the request letter, and the unassailable logic thereof, but in any event, what was supposed to have been a participatory process was, in fact, resolved entirely in our favor without so much as one word of back-and-forth. They took one look at what we outlined, and decided they didn't want to bother even discussing it. They simply caved (as we knew all along settled black-letter law would require) without a further peep from us.

We know how to take "Yes" for an answer.

Weeks of stress and potential personal upheaval, undone in a squeak of flatulence.

Weekly testing (we'll fight that battle vs. The State, not the employer required by them to put it upon us, but which requirement is illogical, pointless, and intended mainly to make our vaxx refusal more painful and onerous, with zero redeeming value to infection control), and wearing an N95 at work, which is already de rigeur for every swinging Richard at work now, 24/7/whenever, and thus a non-issue. They may as well have required us to wear pants, and breathe.

We recognize that not all employers are nor have been similarly sensible and circumspect in regard to their employees' rights, but are heartened that our own employer, who was not the least bit stupid about running headlong to join the Covidiots in their frothing frolics, until the State of Califrutopia, led by serial moron Gabbin' Nuisance, and then followed by senile buffoon Gropey Dopey, Emperor Alzheimers the First, chivied them into the bargain at virtual gunpoint, but this response on their part has pretty well hamstrung such silly-assed and unconstitutional mandates to the bone.

We nonetheless continue to fully support anyone and everyone exercising their God-given right to raise a middle finger in reply to would-be vaxx-rape and vaxx-rapists of whatever stripe.

Too many employers have already decided that kowtowing to government jackboots is preferable to loyalty to their own employees, and those already cast adrift aren't going to go quietly in that good night, nor should they.

Conscious of their fate, we do not dance gleefully at our sudden return to an even keel, but look forward to the day when those wronged have just recompense, ideally involving scaffolds and nooses for the perpetrators, and which day we continue to see as inevitable, and drawing closer by the hour.

But we won't be shipping out on the first boxcars, at least not yet.

"Every day we aren't fighting, is another day to sharpen our hatchets." - Dan Morgan