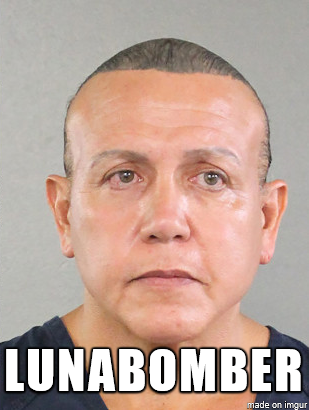 And getting back to Lunabomber for one last minute this morning...

Comments here and elsewhere have riffed on the old Freudian "Sometimes a cigar is just a cigar" line.

I.E., this @$$clown could just be that stupid, and is exactly what the MSM is portraying: A rabid right-wing bomb-mailing wannabe murderer, like all the Deplorables are.

I could see one or two things lining up.

But this is the crime scene in Jack Reacher:

They walk right up to his homeless guy molester van in a metropolis of several million people, and arrest him the next day, like he had a fucking address that said “Trump MAGA sticker-covered van, third row, fourth palm tree from the middle, at 3765 W 207th St” on his vehicle registration, and was wearing a GPS ankle bracelet.

Makes the bombs look cartoonish, yet impossible to detonate, ensuring the FBI has fucktons of surviving evidence.

Does everything but write “Please Open: Bomb Inside” on envelopes.

They get to 12 locations without ever being mailed, but he’s supposed to have sent them via courier. With postage. Like you do.

None of them go to people who open their own mail.

None of them go off, nor could go off.

The media gets invited in by way of getting a couple of their own examples.

Supposedly Republican, waits until we’re liable to have a red wave, then sends devices two weeks before elections, because reasons.

Lights every light on the “not a Republican” list:
Minority
felon
living in his van
pedo/perv

Lives in such Republican hotbed states as NY, NJ, MN.

Looks like the exact mouth-breathing goober DiFi and Pelosi would hire for the role.

The press conference and talking points are ready to be rolled out in 0.2 seconds after the first one is found.

Brennan calls “GOP”, gets his own bomb the next day.

Soros-spawn gets NYTimes knee-jerk editorial while the final bombs are still en route.
Now come on, anybody could get one or two, but eleventy-nineteen and counting, and this is looking like powerball odds of him being the Democrat Wet Dream Fantasy Football Republican Whacktard Pick Of The Year.

This is like someone panhandling and asking for a sandwich when you’re hungry, and instantly an entire 11-course Thanksgiving Dinner is catered to you on the spot, in 5 seconds, including whipped cream on the pumpkin pie, a personal waiter pouring champagne, and a guy playing violin music while bikini-clad models hand feed you peeled grapes as the appetizer.
While carrying the rifle that’s a ballistic match to the JFK bullets on his shoulder, and holding a postcard of himself on the Grassy Knoll in 1963, holding a rifle.

So yeah, FTR, this could have “just happened”.
And been wrapped up and solved faster than cases on TV on CSI.
Exactly two weeks before the election.

IF YOU'RE FUCKING HIGH AS HELL ON TWENTY POUNDS OF CRACK, METH, AND PCP.
Aesop at 11:58 AM